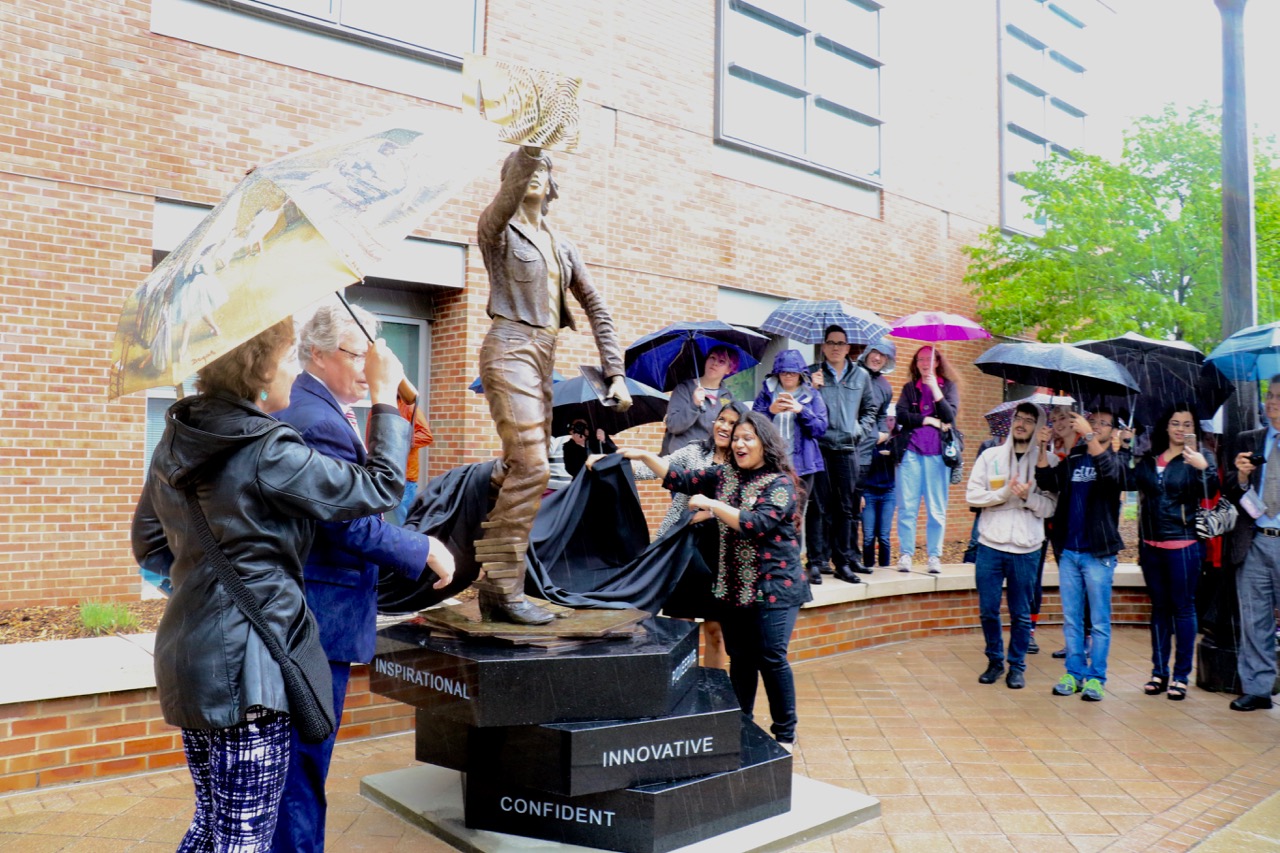 A statue honoring women in engineering titled "The Quintessential Engineer" is unveiled on the Engineering Quad on April 28.

Women in Engineering will now have more representation on campus, in the form of art.

On April 28, the College of Engineering will dedicate a statue honoring women in engineering. The statue was created by Chicago sculptor Julie Rotblatt-Amrany and will be titled, “The Quintessential Engineer.”

The movement to erect a statue of this nature originated from an online petition created in June 2013, by Engineering alumna Sakshi Srivastava.

“I stumbled across an article about how public art conveys the sentiments of a community,” Srivastava said in a press release. “I realized that having a statue erected can show our commitment to younger students that we endorse their dreams.”

The statue was financed by Texas Instruments (TI) to hopefully inspire both current and future female engineering students at the University, said Peter Balyta, president of TI Education Technology.

“For the past several years, Engineering at Illinois has worked hard to increase the diversity of both our students and faculty, especially the number of women who choose engineering as their profession,” said Andreas Cangellaris, dean of the College of Engineering, in a press release. “We very much appreciate this gift from Texas Instruments as it reflects their interest and support for these efforts.”

Richard Kubetz, communication specialist of the College of Engineering, said a committee was created to create the statue after TI pledged the fund for its creation.

Kubetz said he hopes some young women will see statue and know that there is an interest and motivation to include more women in engineering.

“Engineering has always been a male-dominated field of study and field of work. For quite a long time, our college and many others have tried hard to attract more women in engineering.” Kubetz said. “We recognize their contributions and abilities.”

Rotblatt-Amrany is well-known for helping to create Michael Jordan and Scottie Pippen statues which reside at The United Center in Chicago.

Creating a female sculpture, she admits, is something doesn’t do that often herself.

“As a female artist I can honestly say that 90% of the figures that I do sculpt are men, this needs to change so that woman can be empowered through their work world,” she said in a press release. “Young woman need to have icons to look up to as well. The scales seem to be unbalanced; we are late in equalizing the paradigm shift. I was so pleased to be chosen as the artist for this project, it really means a lot to me.”

Describing the statue, she said that the piece is meant to engage students and observers, reflecting the era from which the sculpted woman is from and allowing those to interpret what her future holds.

“The face, the expression is one of wonder, exploration, and knowledge, one of curiosity and perseverance,” she said. “She represents a multi-racial female, a young professional woman at work… always thinking, on the move.”

Students have gravitated positively toward the new statue.

“I think it’s really cool. It’s a big step in equality that we have this statue to represent what we’re trying to get to,” said Rachel Lawless, freshman in engineering.

In regards to the college of engineering doing enough to equally represent women in the field, Lawless thinks that “they’re doing a lot.”

“I think they are trying. There’s always more that can be done, but it’s just a difficult situation; we’re still not at 50/50 representation. I don’t ever feel discriminated against,  I think that you can definitely sense that there are a lot of advocacy for reaching equality,” Lawless said.

Anna Jedralski, senior in engineering said that it’s an inspiring statue to have on campus.

“It’s refreshing to see an image you can relate to, it’s an inspiring one too. It kinda reminds me of the statue in New York, of the little girl with the Bull. It’s good to know that our efforts are being seen and appreciated,” Jedralski said.

After completing an internship, it was jarring to see how well we’re supported in college, Jedralski said.  That’s not the case in the industry, but this (statue) is a good sign. With more girls studying engineering in college, hopefully that trend will change in the industry.

Ceci Klauber, third-year grad student in engineering said that she is excited to have a representation of women on this campus in engineering.

“It’s a long time coming, but I also think that it shows that we care about diversity, and not just male/ female, but other kinds as well,” Klauber said.

Because so often we look in our classes and we just see a bunch of guys. We’re like ‘Oh, no one here looks like me,’” so being able to see a statue on your way to class is very inspiring, Klauber said.