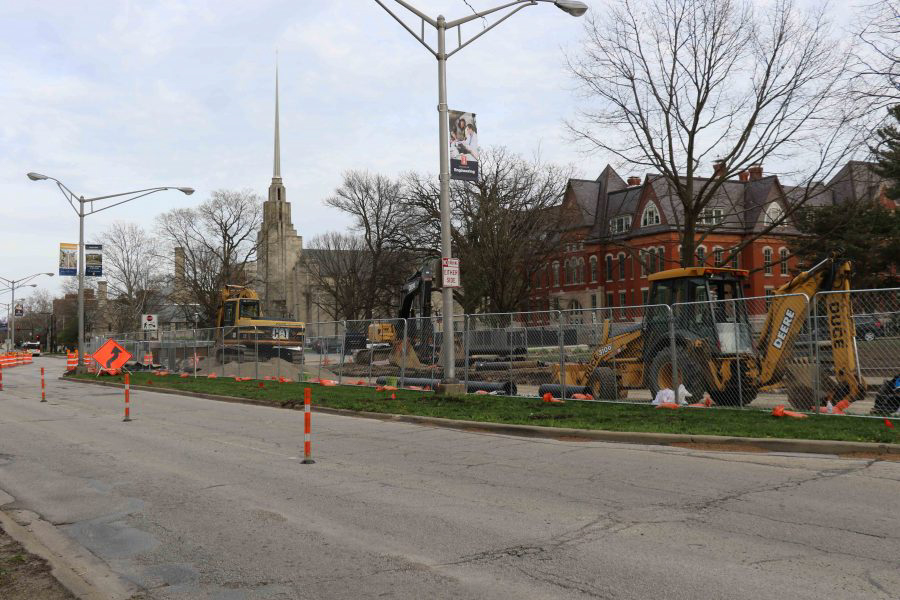 MCORE renovations are made in front of the Illini Union and portions of Green Street, which is part of a five-part plan to renovate campus streets. Projects 1, 2 and 3 are ongoing, with projects 4 and 5 scheduled to begin in the next two years.

This past March, another two-year project went underway when construction for the Multimodal Corridor Enhancement (MCORE) project began.

The MCORE project aims to ease conflict between modes of transportation, enhance transit corridors and improve linkages between points of interest in Champaign-Urbana.

Construction involving parts of Campustown, including the strip of Green Street by the Union’s north entrance, will continue until December 2018.

A section of Green Street between Wright Street and Mathews Avenue was closed for several weeks to rework the Union’s water main.

Green Street was reduced to one lane in either direction, and transit users had to board buses from the median.

It was a different setting than normal for the stops, but it wasn’t far off from what the final design looks like.

Part of the project will create a transit boarding island north of the Union, creating a designated lane for buses to pull into where the median is now.

Another section of Green Street between Neil and Fourth streets is under construction, forcing some MTD buses to reroute.

While the lane closures have caused some inconveniences, much of the construction involving Campustown and the Union is scheduled for the summer, when most University students won’t be affected.

The re-landscaping of the Union’s north face, for example, will require the north and west entrances to be closed off, said Illini Union Board President Alonzo Marsh.

The construction, however, won’t begin until the end of the spring semester, and the entrances will be reopened in early fall.

Construction for all aspects of the MCORE project is scheduled to be completed in December 2019.

Although that date could seem far away to some, the project is ultimately a great asset to the University and to Champaign-Urbana, said Louis Braghini, engineer technician for Champaign.

“There will be some delays and overall congestion,” Braghini said, “but once the project is done, this’ll be a great addition to the Campustown area.”