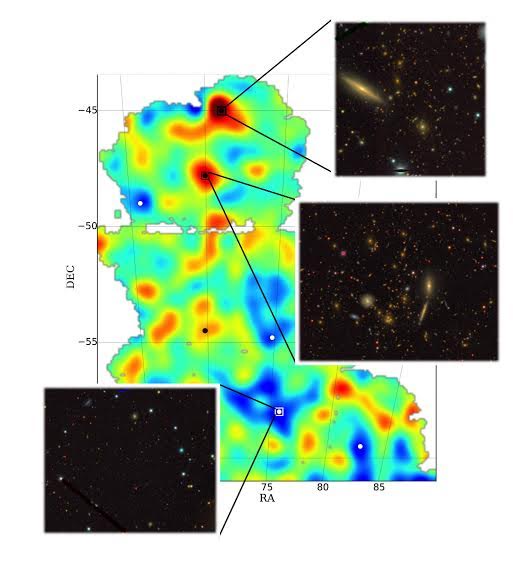 The first largest dark matter map created by the Dark Energy Survey Group. University astronomers are taking a deeper look into dark matter, which is virtually impossible for humans to see.

Some University astronomers are trying to answer the big questions of the universe by researching material in space that is invisible. This invisible “stuff” is called dark matter.

Professor Brian Fields, department chair of Astronomy and professor, says dark matter is one of the biggest scientific questions there is today.

“It’s made of completely different stuff,” Fields said. “It’s not protons, neutrons, or electrons, but it’s something we’ve never seen before.”

To understand what dark matter is, astronomers are researching it and formed the Dark Energy Survey Group (DES). The DES is a collaboration of international researchers, including University astronomers.

Matias Carrasco Kind is a research scientist for the DES. He works at the National Center for Supercomputer Applications at the University.

Kind and the group try to understand dark matter from a very large scale. Astronomers hypothesize that dark matter is what is holding galaxies together since it creates an attractive force.

To do this, Kind and the DES use a 4-meter telescope in Chile to take high-resolution images of the sky with one of the largest digital cameras in the world. This camera is called the Dark Energy Camera (DECam). DECam creates 570 million pixel images.

They have observed more than 300 million galaxies. This is just one-eighth of the visible sky, Kind said.

The images taken by DECam are sent to the NCSA where Kind and other researchers catalog the galaxies and store them in a database.

Last year, the DES created the first dark matter map using data from these images. This is the first map ever produced that shows how dark matter is distributed on a small region of the sky, and they plan to create a much bigger map this upcoming year.

Understanding how much dark matter is out there and what it consists of can help astronomers understand how the universe has been evolving and forming.

Kind says this is a great time for astronomers to make profound discoveries.

“We are entering a very exciting time where we have very precise instruments to do things we’ve never thought we could do before,” said Kind.

The universe is made up of an estimated 80 percent of dark matter, which humans cannot see.

Eliu Huerta, University astronomer and lead scientist of the Gravity Group at the National Center for Supercomputing Applications, hopes to fully understand what dark matter is in the next couple of years.