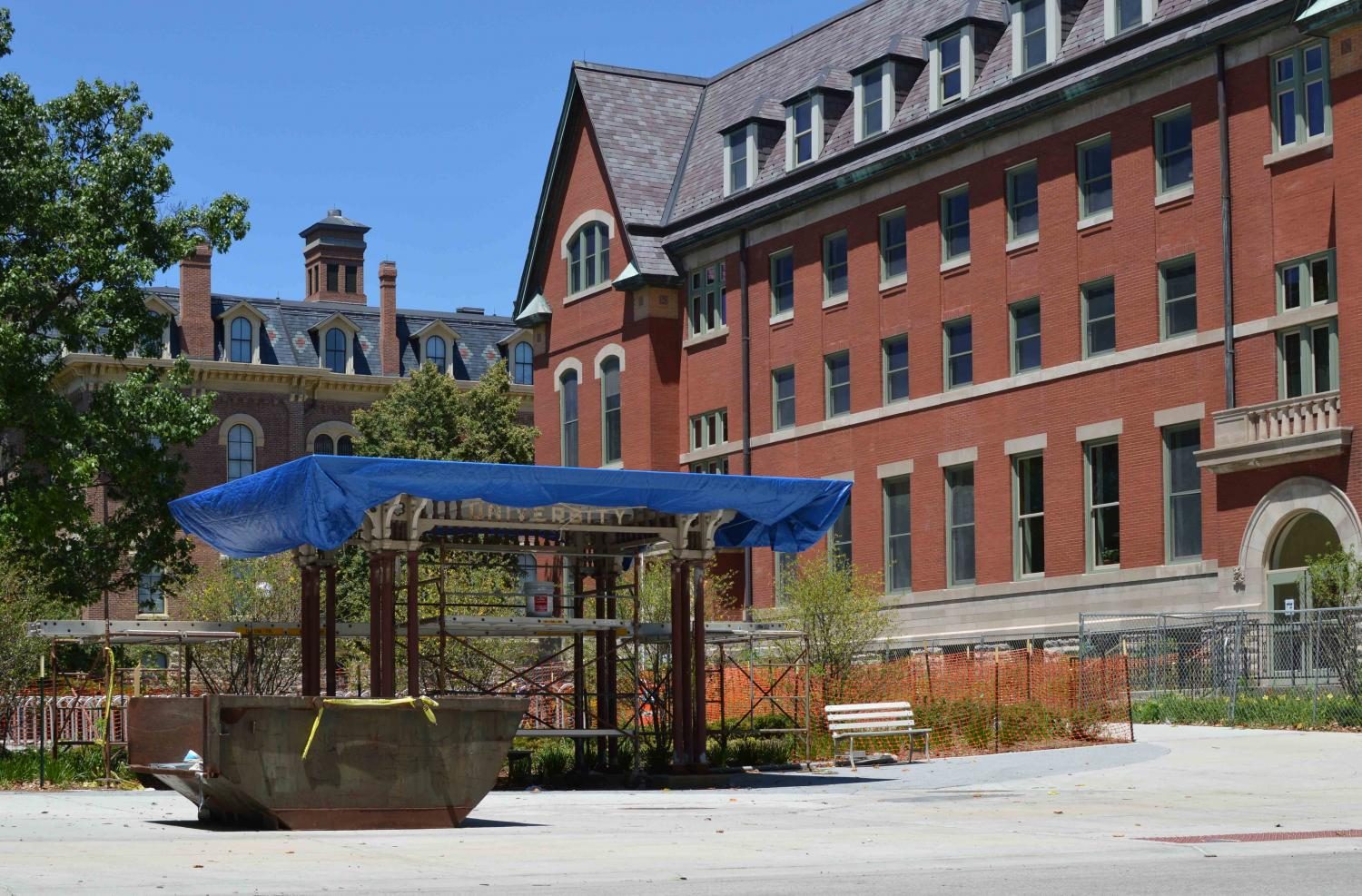 The Halfway House, once a campus staple, made its return with the completion of the National History Building.

It’s been nearly three years since Halfway House has been missing — and now, after the completion of the Natural History Building, it’s back on campus.

But to many students and University fans alike, this means little to nothing.

After asking over 20 sunbathers on the Main Quad, not a single one had knowledge of the little landmark that has sat on campus since 1884.

Halfway House is not housing for recovering criminals, as most guessed.

In alignment with campus lingo, Halfway House is a small, open white structure located on Mathews Avenue between Noyes Laboratory and the Natural History Building.

The building serves a similar purpose as an enclosed bus stop, with four columns supporting the roof and shading benches located underneath.

Still, the structure has a lot more history than the average campus bus station.

The landmark originally provided shelter for students and townies waiting for the streetcar, which in the late 1890s turned onto Wright Street, though its first location isn’t precisely known.

The structure was relocated shortly after its construction at the prompting of The Daily Illini in 1894.

“The streetcar company [Urbana and Champaign Electric Street Railway] has reaped abundant harvests from the pocket-books of the students and professors of the University,” the article said. “It has not deemed it necessary in the least to arrange for their comfort, having provided no protection from storms for persons waiting for the cars at the University stopping place.”

In response to this complaint, The Board of Trustees voted to enact Halfway House on the northern entrance of the campus, which today would be in front of The Illini Union. Halfway House earned its name there, for its spot halfway between Urbana and Champaign.

According to the University Archives, the railroad service stopped in 1908, but Halfway House served as a waiting station until 1961, as well as a social meeting place on campus.

Meetings, polls, elections and other student events were held at the site frequently, until the widening of Green Street in the 1960s caused the little structure to be removed completely.

In 1963, the Daily Illini staff, led by Roger Ebert, began a campaign to find the waiting station and bring it back to prominence. Ebert himself wrote countless editorials and articles bringing light to the issue, calling the landmark the “front door” of campus.

Eventually, the structure was found taken apart and stacked against a chicken shed near Mount Hope Cemetery south of campus.

“We feel it is important that Halfway House be restored to a central location where it can be seen and used,” Ebert wrote in one editorial. “We urge the University not to hide one of its handful of legitimate landmarks.”

After much planning and negotiation on part of the University, Halfway House received permanent placement in 1964 on Mathews Avenue, until as recently a 2014.

During the Natural History Building renovations, Halfway House was disassembled and moved to an area north of the construction site, said Steven Breitwieser, manager of communications and external relations for the department of Facilities and Services.

Breitwieser said an engineering firm evaluated the structure and designed a new foundation and structural connections.

“Substantial completion of the NHB project this summer will include reassembling and refurbishing the shelter, south of the facility on Mathews Ave,” Breitwieser said. “The restored structure will include a new metal roof, rafters, and decking that addresses previous water and termite damage. Historical documents were also reviewed to make sure new paint colors match.”

Additionally, the structure will stand in an area that will house bike parking and landscaping, marking another new era for the waiting station.