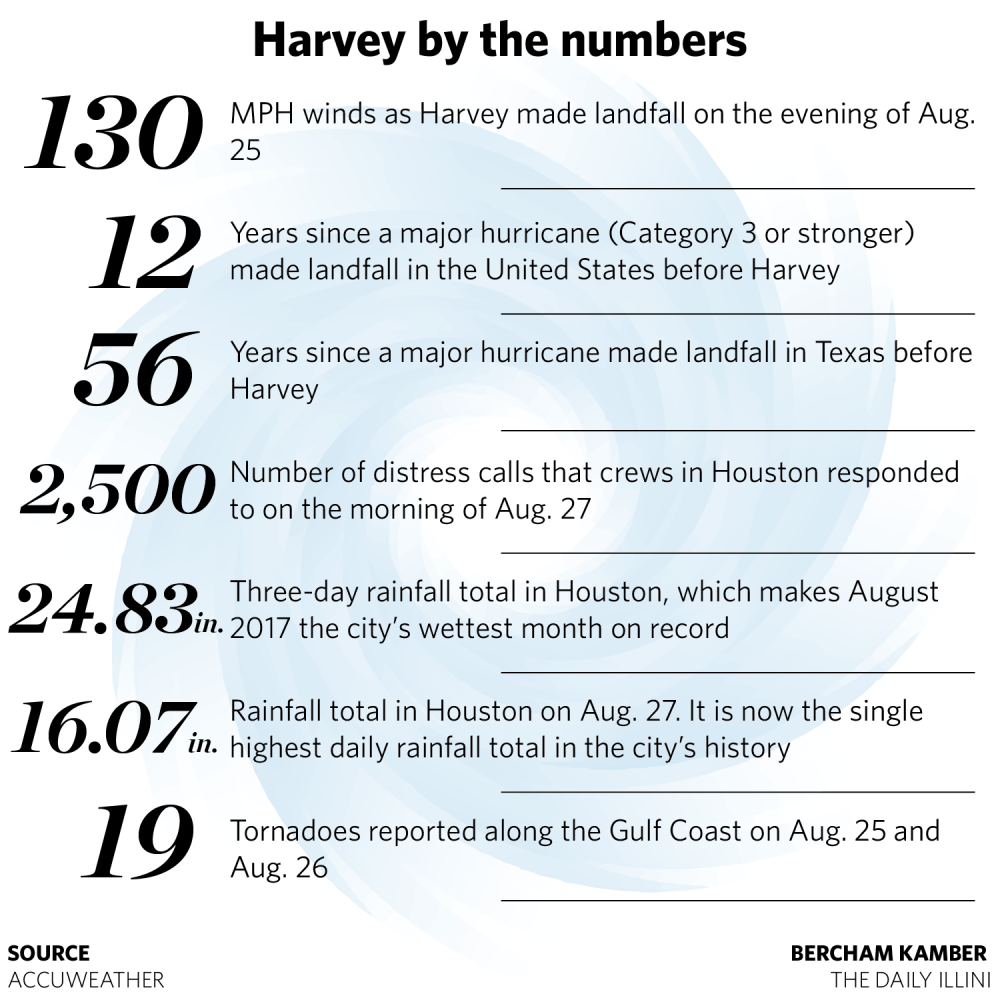 Although the Champaign-Urbana area remained mainly sunny this past week, Hurricane Harvey still cast a shadow on the local community. As an effort to combat this, local organizations are coming together to help those who have been affected by the flood.

Phillip Smith, sophomore in FAA who was born and raised in Houston, found out his house is damaged beyond repair from the flood. Smith said the water rose to over six feet at its peak.

“(My parents) were rescued by the coastguards. That’s the point where the water starts getting higher and higher and a lot quicker and it’s harder to escape,” Smith said.

Smith said it is uncertain if his family can ever go back to their house, and the flood is going to have a severe impact on their lifestyle.

“We had four cars, all of them are gone, washed away by the hurricane,” he said. “The only way to improve from here is to spend money, and some people unfortunately don’t have that money.”

Although heavily impacted by the flood, Smith said he feels fortunate to still have food on his table and a roof over his head. Meanwhile, he urges people to help those who have less.

“It’s something that once you’ve been through it, it opens your eyes and makes you realize how much we need other people,” he said. “It can’t be only the people you know; you have to branch out of your comfort zone, you have to go the extra mile. It takes a team. At least of being aware of what people are going through.”

Amelia Mugavero, a University alumna from Texas, said it is heartbreaking and disturbing to see a whole city underwater.

“More and more people are in danger, and in fear (for) their lives. They’ve lost everything,” she said. “However, it also gives us hope to know we’re all coming together.”

Mugavero said thousands of responders and volunteers are helping on scene by giving out food and supplies. However, many people are still without clean drinking water.

Mugavero also said there are many people who are diabetic, on dialysis or under cancer treatment who have been left without adequate medical resources due to the flooding. According to the Texas Department of State Health Services, at least 16 hospitals are closed due to the flood.

However, many local resources are reaching out to help relieve those affected by the flood.

Trish Burnett, American Red Cross Central and Southern Illinois Regional communications director, said the flood is still an ongoing situation, and the Red Cross has several hundreds of volunteers on the ground stacking shelters and making sure people are fed.

“Don’t know where it’s going to rank, but it’s definitely at the top of the disasters our country has ever seen,” Burnett said. “I mean, it’s a devastation we can’t even really fathom when you’re not there in it.”

Burnett said the Red Cross also has trained health and mental health professionals that are providing people with the medical services they need.

“It is traumatic,” she said. “People will have needs immediately and for weeks and months to come because their lives have turned upside down.”

Burnett said the Central and Southern Illinois Red Cross has already sent more than 50 volunteers and staff members as well as five emergency response vehicles down to Texas. Donations are also being collected and put to good use in helping relieve the disaster.

“We have lots of support from the administration, the students, and all that from many colleges,” Burnett said. “There has been support offered, and we are appreciative of everybody’s efforts.”

Ameren, the electric service company catering to Central Illinois, also reached out to the flooded areas. The corporation donated $25,000 to the Red Cross to help relieve the flood.

“We are pleased to be able to provide both to the affected communities in Texas and the Gulf Coast during this historic storm,” Warner Baxter, chairman, president and CEO of Ameren Corporation, said in a press release. “Our thoughts and prayers are with the families and first responders that are being impacted by this devastating hurricane.”

Brian Bretsch, media contact at Ameren, said 44 contractors doing work on behalf of Ameren Corporation have been released to assist with the restoration in the Texas area. More contractors, linemen and gas workers can be released if needed.

Students at the University are also helping flood relief efforts. Inline Insomnia, an RSO that organizes midnight skating, hosted a “sk8 for Houston” event on Aug. 30.

Claudia Kubarycz, president of the club, said the idea of the event was to have people skate eight miles and donate eight dollars.

“It became kind of obvious that it wouldn’t be very hard to do an awesome first skate, but also try to incorporate helping Houston,” Kubarycz said.

Smith said it is important to stay thankful and be aware of what is happening in other people’s lives.

“People who aren’t affected: you have your home, you have your family; some people lost their loved ones to the hurricane,” he said. “Really be thankful to have your home, because when I left my home this August, I didn’t know that would be the last time I maybe ever see my home, or at least the home the way I knew it.”