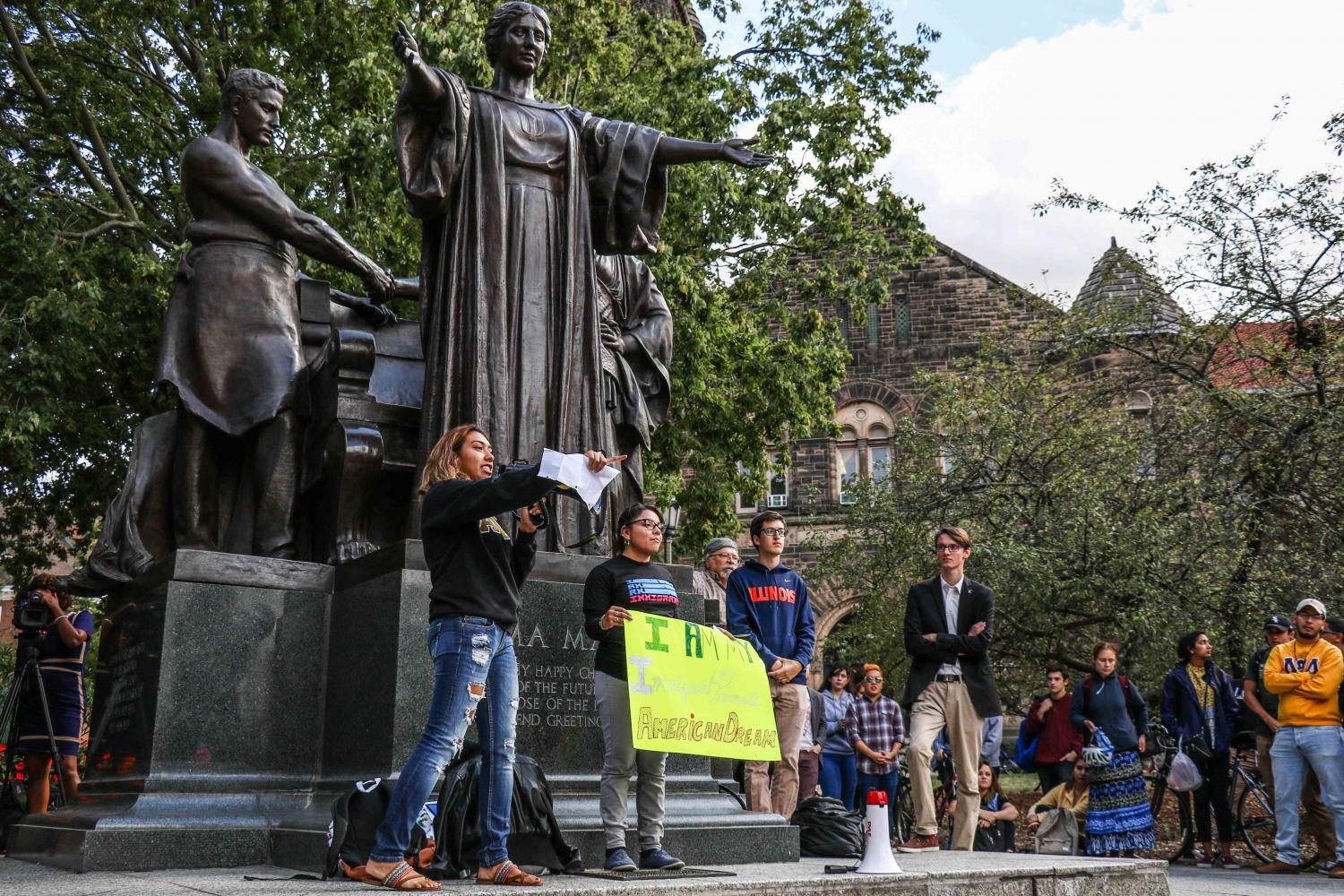 A student speaks to crowds in front of Alma Mater gathering to protest President Trump’s decision to end the Deferred Action for Childhood Arrivals (DACA) earlier this year.

President Donald Trump’s administration announced on Tuesday the phase out of a program protecting young undocumented immigrants, leaving the futures of thousands up to Congress.

The White House declared that immigration services will no longer be accepting any initial requests for the Deferred Action for Childhood Arrivals (DACA) program, which shelters undocumented immigrants who were brought into the country as children from immediate deportation. They also announced that there would be a six-month gap before the repeal is enforced, and called upon Congress to find an alternate fix for the program.

Both University President Tim Killeen and Chancellor Robert J. Jones sent out Massmails Tuesday disapproving the administration’s decision and expressing their support for the DACA program. Both pledged the University will continue to assist and support undocumented students through the six-month limbo.

“We will advocate for the continued access of undocumented and DACA students to full educational opportunities,” Jones wrote in the Massmail. “We will build a campus culture of inclusion to ensure all members of our community may pursue their educational and professional goals not only free from acts of discrimination and intolerance, but in the full knowledge they are welcomed and embraced.”

Similar to how they handled whether to become a sanctuary campus for undocumented immigrants in December, Killeen’s email stated that as a public university, they “will always comply with all federal, state and local laws.”

“However, our values as a land-grant institution compel us to speak out when government action puts members of our own communities at risk. The elimination of DACA is inconsistent with our commitment to accessible and high-quality education for all qualified and deserving students,” Killeen wrote.

Current DACA recipients are eligible to send a renewal request until Oct. 5, and as of now their benefits will expire March 5, 2018, at the latest.

Until March 5, 2018, the future of DACA resides with Congress.

“This is a gradual process, not a sudden phase out. Permits will not begin to expire for another six months, and will remain active for up to 24 months,” Trump said in a written statement. “I am not going to just cut DACA off, but rather provide a window of opportunity for Congress to finally act.”

Posted by The Daily Illini on Wednesday, September 6, 2017