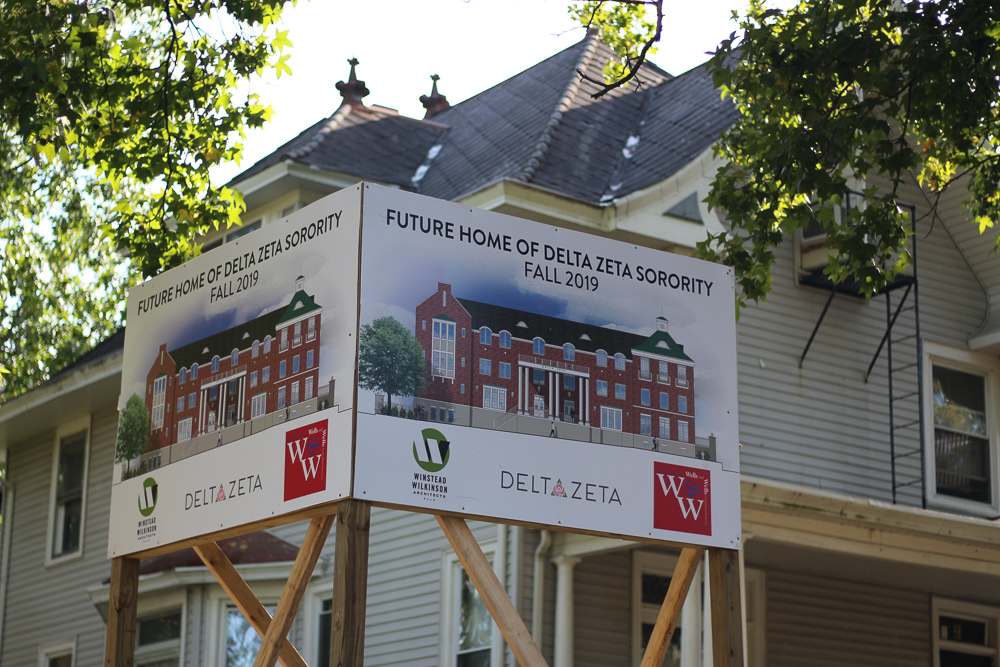 Site of the future Delta Zeta sorority house located on the corner of John and Second Street.

Delta Zeta is planning on leaving their long-time location in Urbana after completion of their new wheelchair-accessible chapter house in Champaign.

Madelyn Smith, president of Delta Zeta, said the sorority has been trying to get a new house for years.

“We have had the house that we’re in now since the 30’s,” Smith said. “While we have a lot of good memories here and we all really love it, having a new house is something really exciting to look forward to.”

A special feature in the new house is an elevator that makes the house more accessible to wheelchairs, said Smith.

John Gottschall, Delta Zeta’s Chief Financial Officer, said the construction is planned to begin in May 2018 and members are expected to move in August 2019. Until then, the sorority will remain in their current location.

Smith said there are currently two other houses on the property they will build on, so Delta Zeta is honoring their lease and will start construction next summer.

“I will sadly be graduated by the time they move into the new house, but it’s still really exciting to see the plans and to help get things moving along,” Smith said.

As the president of the sorority, Smith was the first person to learn of the plan and said it was exciting to be able to make the announcement to the members.

Smith’s excitement is shared by other members. Allie Ward, junior in Kinesiology, said they have been waiting for a new house for a long time, and the new house will bring changes to the sorority.

Like Smith, Ward will be graduating before the house is completed, so she won’t be living in the new house. However, she is still happy to leave the house better than it was.

“We’re so far out in the middle of nowhere, and it will give our house some more attention,” Ward said. “This make people remember us, like we’re still here, we’re not all the way out in Urbana.”

Location is not the only update Delta Zeta is getting from the new house. According to Gottschall, there will be larger common area space, more study and meeting space, and a larger kitchen and dining room.

Faith Krumbieve, housing manager of Delta Zeta, said they just received the floor plans and no one in the chapter has seen it yet.

Krumbieve said it was exciting to finally receive the floor plans, even though the announcement about building a new house was made in April.

Krumbieve said although many current members will not be living in the new house, they are still excited to visit on homecoming, Founder’s Day and other occasions.

“It’s so exciting that I’m living in the old house but I’ll also get to experience the new house in a different way,” she said.