Out with the old, Inn with the new 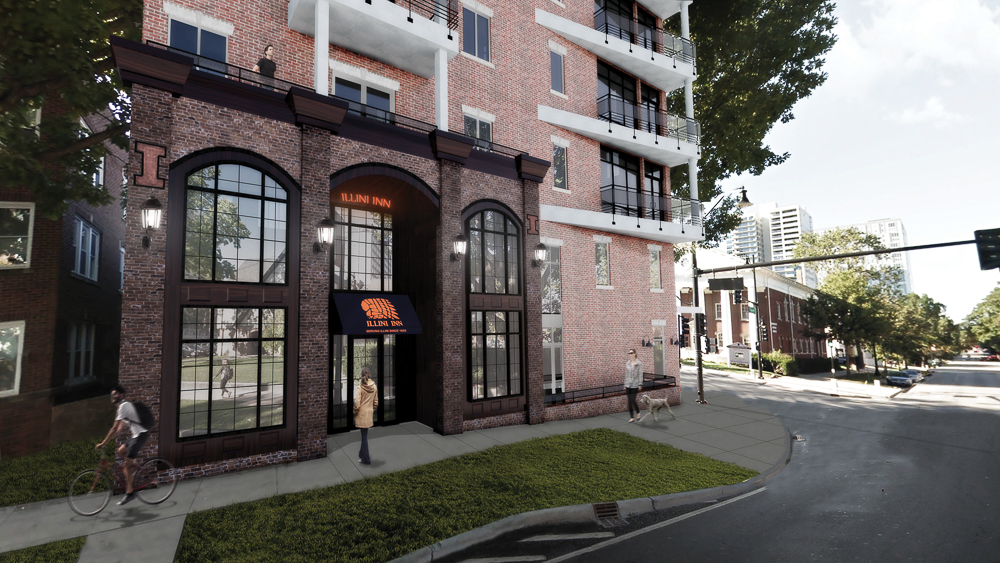 This model is of what the new, three-story Illini Inn will look like. The property will also feature 22 apartments above the bar area.

Though the Illini Inn’s summer demolition marked the end of an era for many University students and alumni, the construction of a new Illini Inn, according to the bar and property owner, Chris Saunders, is already underway.

“We’re doing the basement and a lot of the underground stuff right now,” Saunders said. “There’s quite a bit that’s going to happen before the property comes out of the ground.”

On Jan. 17, Champaign City Council approved the construction of a seven-floor, mixed-use development at the location, containing 22 apartment units and a new Illini Inn.

The new Illini Inn will be incorporated into the development as a three-floor bar – main level, basement and a second floor mezzanine – and will include a full kitchen for all-day food operations, Saunders said, who plans to provide Wi-Fi and coffee for future customers.

The new Illini Inn will be designed to mimic the positioning and older aesthetic of the bar’s former establishment, Saunders said, while assuring bar traditions, such as the well-known Mug Club, remain.

“We’re kind of designing the building to make it look like we’ve slapped a new building atop of an older looking Illini Inn portion,” he said. “We think it will be a popular spot. A ‘take two’ while still carrying over the traditions from the past.”

The rest of the development will contain 22 one-to-three bedroom apartment/penthouse units to be managed and leased by Green Street Realty, which Saunders also owns.

“The staff was always nice and easy to work with,” James McNair, senior in the School of Music, said. “ Last year, some friends and I performed there a couple times. The bar supports live music, unlike other bars on campus.”

He said the decision to tear down the former Illini Inn building was not easy, given the location’s history as an alcohol-serving establishment dating back to the 1960’s, but felt it was necessary for the bar’s future.

“If you had been in the building anytime in the recent past,” he said. “You’d see that the building was in really rough shape . . . There was literally no business (over the last school year). It was nostalgic, but it certainly wasn’t a place where people really went.”

Despite the conditions, Alumni Melody Lee said her experiences at the Illini Inn were always great.

“The Illini Inn was the place to go if you were looking for a chill environment where everyone can have an intimate time with their friends rather than being at a packed, dark bar,” Lee said.

Some students think the Illini Inn was a good place to go after a night out.

“To me, the Illini Inn was a bar to go to as the night was ending because there was a pizza place upstairs too,” she said. “The crowd was mostly upperclassmen, so the regulars who graduated loved that bar won’t get to see the Illini Inn post-graduation”

Construction of the development is expected to finish in late spring to early summer, according to Saunders, with plans for the building to open to the public by August 2018 before school starts.

“I visited the Illini Inn a few times, usually in between periods of the hockey games that took place across the street,” Ljubica Basica, senior in LAS, said. “I enjoyed the chill vibe at the Illini Inn, it was always very relaxed.”