Students share their experiences as half student, half ROTC candidates 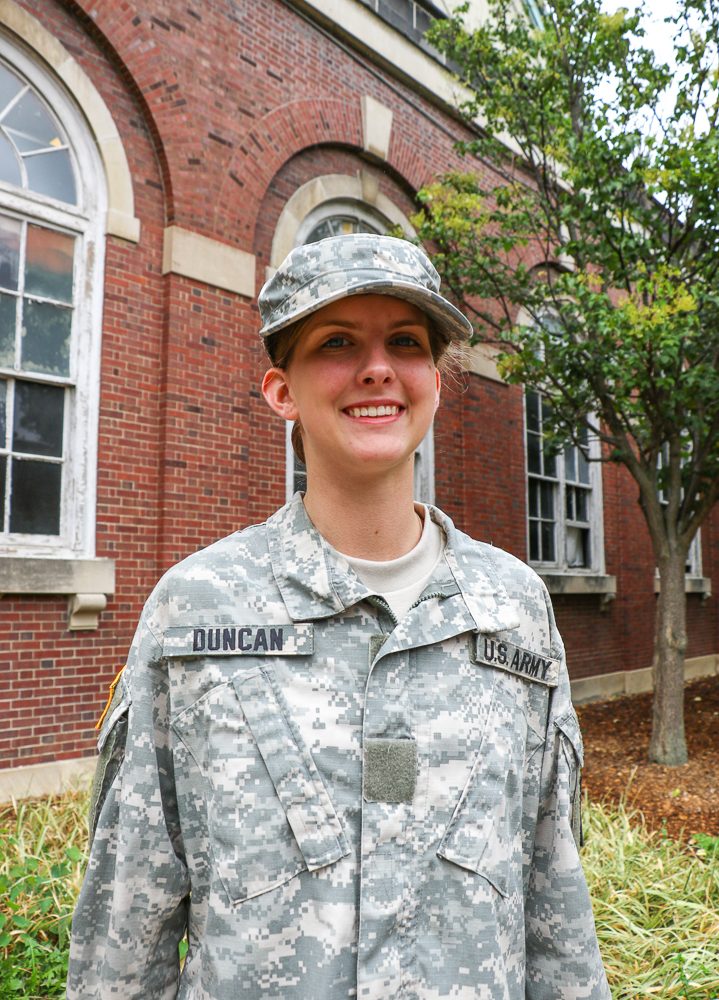 A portrait of Allison Duncan.

Growing up, Drew Barto, sophomore in DGS, listened to stories of army officers from his grandmother. Although he said he did not know it then, those stories were the beginning of his military career in the Army Reserve Officers’ Training Corps (ROTC) at the University.

ROTC is a program across university campuses aimed to prepare college students to be officers in the armed forces upon graduation. The ROTC program is broken up by four branches: Navy, Army, Marines and Air Force.

Students part of ROTC are expected to complete Physical Training (PT) at least three times a week from 6 a.m. to 7:30 a.m. as well as attend practical labs on Thursday. These labs consist of a variety of field work depending on the branch including practice skills such as navigation and rifle training.

“It requires a physical toll,” Barto said. “But it’s all real mental toughness.”

PT consists of different workouts per session, but oftentimes they are expected to run a few miles and do push ups and sit ups among other exercises.

“PT so far has not been crazy,” Allison Duncan, freshman in LAS and Army ROTC member, said. “You just have to put your mind to it.”

What often draws potential candidates to be a part of ROTC are the multiple scholarship opportunities available. Any student that participates in ROTC their freshman year is eligible to apply for a state tuition waiver where the state will pay for the first year of tuition. There are also two, three and four year scholarships.

“I have the three year AD scholarship,” Duncan said. “(Without the scholarship) I definitely still would’ve done ROTC just for the benefits and things that it offers especially towards my future.”

Duncan is working towards a career as a Judge Advocate General, which is a type of military lawyer. Although she is one of the few girls within the Army ROTC program, she said being a woman does not interfere with the camaraderie within her squad.

“We have a group chat and we’re always talking,” she said. “Battle buddies are people that you can count on. You know they’re always going to be there for you.”

When students sign up to participate in ROTC, they do not have to commit until after their sophomore year at the University. If they choose to commit and become a commissioned officer by graduation, they are obligated to serve eight years in the Army post-graduation.

Some students, however, do not join ROTC until their sophomore year.

“When I came into college…the Army wasn’t in my radar at that point,” Vinay Prabhakar, junior in LAS and member of Army ROTC, said. “It took me a year to decide that I actually wanted to do it and I was training over the summer to catch up.”

Due to the sheer amount of time ROTC members spend with their peers, they tend to develop close relationships.

“What I personally found in it, which I wasn’t expecting, was a family,” Barto said. “The other soldiers become your brothers, the sergeants are like uncles. They take care of you and look out for you and you do the same for them.”

ROTC tries to accommodate religious beliefs as well within the units.

“I’m vegetarian because of my religion and when we have to eat MREs (Meals Ready to Eat), I was afraid there wouldn’t be too much that would accommodate to my dietary restriction,” Prabhakar said. “But they were very accommodating to my beliefs and they didn’t discriminate.”

There are also multiple leadership opportunities within ROTC. Barto, as a team leader, is in charge of two freshmen cadets which he says is the best and most challenging part of Army ROTC to date.

“The opportunity to teach and become a role model for the freshmen — it’s the greatest opportunity I’ve had as well as the largest challenge,” he said. “You’re molding a person for how they’re going to be in the future.”

That personal relationship, however, is what helps tie the whole battalion together.

“The joke I like to make is that I’m in the best fraternity in America, which is the United States Army,” Barto said. “My guard unit is like my family.”