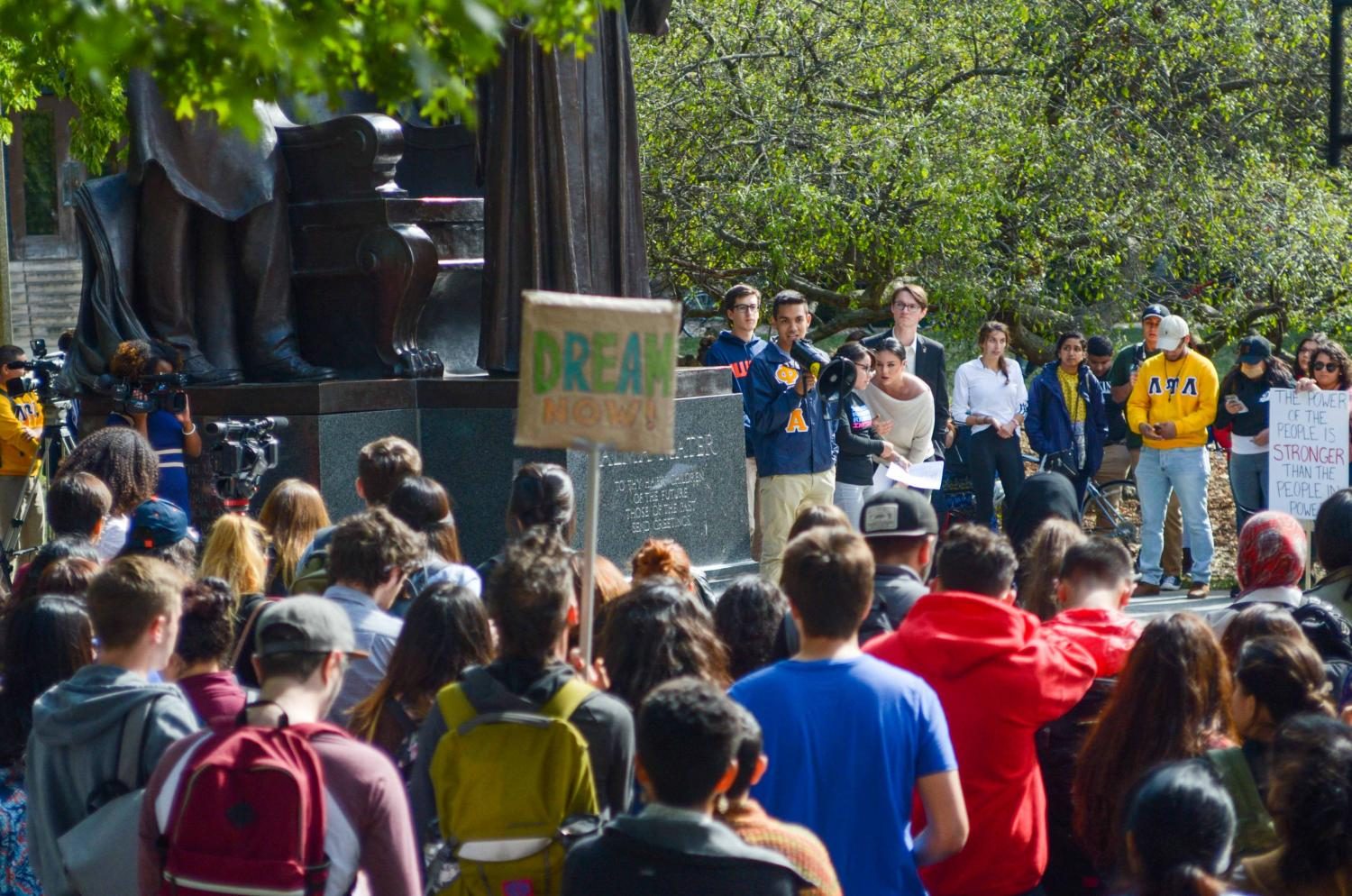 Students rally at the Alma Mater in the wake of President Trump’s decision to end the DACA program.

The Illinois Student Government’s response to the repeal of the Deferred Action for Childhood Arrivals program was approved Wednesday evening after several members of the student body gave their remarks.

The resolution was introduced Sept. 6 in response to the administration’s official announcement the day before. The resolution formally condemns “the Executive Action’s effect” on undocumented members of the University and calls upon the University to support those affected.

Specified requests include working with DACA recipients to allow them to continue their work, supporting the BRIDGE Act and Student Access Bill, and providing resources to the University’s cultural centers and Counseling Center.

Nancy Ramirez-Blancas, senior in LAS and DACA recipient, said although she understood DACA was meant to be a temporary solution, its repeal is still impactful for recipients of the program.

“There are many students here that need support to continue their studies,” Ramirez-Blancas said, who co-authored the resolution. “It’s unfortunate that DACA has been rescinded, but I think it’s a perfect opportunity for Congress to pass a more permanent solution.”

Andrew Minik, senior in Business and treasurer of the University’s chapter of Turning Point USA, criticized the resolution for not mentioning the administration’s decision to phase out the program in six months to give Congress an opportunity to replace it.

“The ignorance of this (resolution) to explain that fact amounts to fearmongering and a deliberate spread of misinformation,” Minik said. He also disputed that ISG served as the “official voice of the student body,” but said ISG members are indeed elected to serve as “a voice.”

While presenting the resolution with other co-authors, Chief of Staff Spencer Haydary, senior in LAS, urged the assembly to utilize ISG’s voice.

“We’re not asking them to reinstate DACA or for full citizenship,” Haydary said. “We are asking that you (show your support) for providing resources for students that are affected by this decision, because the way that we vote tonight sends a strong message to our constituents.”

An amended version of the resolution to support allowing medical marijuana on campus was also debated. Amendments were made in an informal committee meeting, but the resolution was once again referred to committee for further revisions.

Senator Sully Peterson-Quinn, senior in FAA, reintroduced his resolution to create an “Illini Election Day.” The 2018 Illinois primaries fall on the University’s spring break; the event, to be held on the first day of early voting, aims to counteract the anticipated drop in student turnout. The resolution was referred to committee to be discussed.