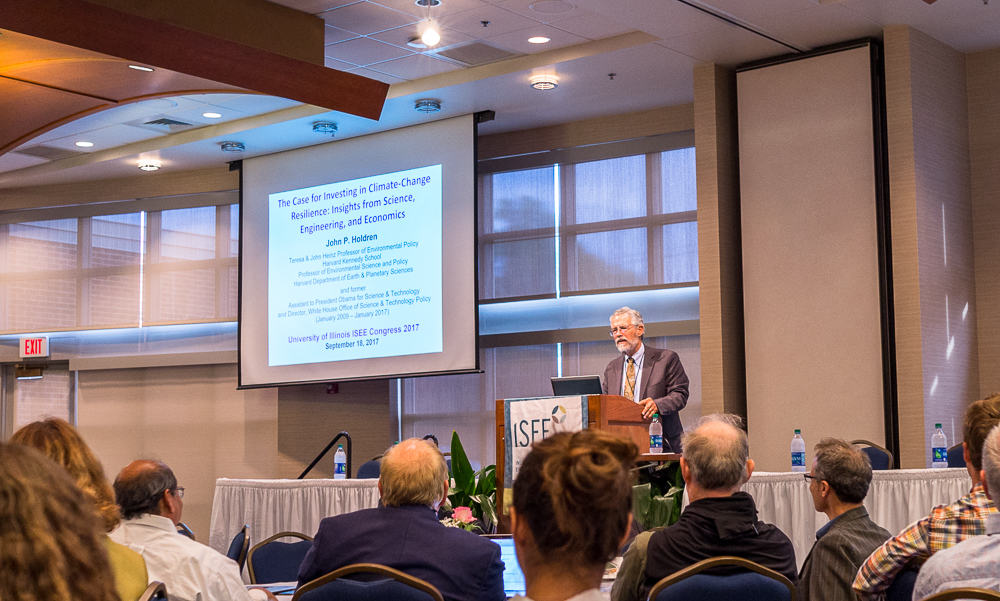 John Holdren, former director of the White House Office of Science and Technology Policy, gave Keynote speech at ISEE Congress 2017 on Sep. 18th. The congress this year takes place at the Alice Campbell Alumni Center and has a topic of Building Resilience to Climate Change.

This past week, students and faculty were able to discuss climate change and its many accompanying issues with guest speakers from around the world.

The iSEE Congress 2017 focused on “Building Resilience to Climate Change” and was organized by the Institute for Sustainability, Energy, and Environment.

Held at the Alice Campbell Alumni Center from Monday to Wednesday, the campus community was invited to participate in the congress aimed at engaging and educating the public about the importance of climate change and resilience.

According to iSEE’s website, the aim of the Congress was to “assemble leading national and international scientists from different disciplines to advance scientific understanding on the impacts of climate change on the agricultural sector, on ecosystem services, and on human livelihoods and well-being.”

Speakers included professors from the University as well of those from Harvard, University of Michigan, Rutgers University and more. Keynote addresses were also made by Justin Gillis, an environmental science author and journalist, and John Holdren, Former Director of the White House Office of Science and Technology Policy.

“The Congress will foster critical thinking not only on the challenges posed by climate change, but also on the areas for further research and institutional development to adapt to it,” iSEE stated on their website. “The event will provide a forum to discuss the options for building resilience to climate change and policy directions that could contribute to long-term solutions.”

Chancellor Robert Jones gave welcoming remarks Monday stating that the University should and must play a distinctive role in developing solutions for the years to come.

“Understanding how these global climate changes are going to impact the future, and developing solutions that let our society adjust, adapt and survive, is a massive and daunting challenge,” he said.

Jones stressed that the complexity of the issues society faces from climate change are too big to tackle alone. Instead, the approach will be on a massive scale of multidisciplinary efforts, from engineering to economics to human behavior.

“It takes a systemic approach that embraces across research, policy and practical application,” he said. “And it demands an unwavering and sustained commitment to this effort, and pay strict attention to priorities.”

On Monday, keynote speaker Holdren addressed the importance of taking steps to reduce the impacts of climate change.

“What can we do?” he said. “Adaptation, preparedness, resilience and measures we take to reduce the damage to the society and ecosystems that we can’t avoid.”

Holdren said that taking measures of adaptation, preparedness and resilience were a ‘win-win’, citing that taking these steps would still greatly benefit our society even if we weren’t aware of climate change.

Holdren said that as a whole, we have three options: mitigation, adaptation and suffering. He said we are already doing some of each, but that it is important to figure out a combination to lessen the degree of suffering as much as possible.

“So we need enough mitigation to avoid unmanageable climate change, and enough adaptation to manage unavoidable climate change,” he said. “That’s the story, that’s the reason, that we need the investments and the measures of resilience that this conference is all about.”

Chancellor Jones was optimistic in the what the Congress would be able to help foster with people from different perspectives and backgrounds coming together.

“When you have this type of intensive convention and convergence of ideas, you may not be able to predict where the conversations will lead,” Jones said. “But I can assure you they’re going to bring all of us together at this exciting point in time, and help us define and decide on the new collective direction.”