Student finds strength through her faith 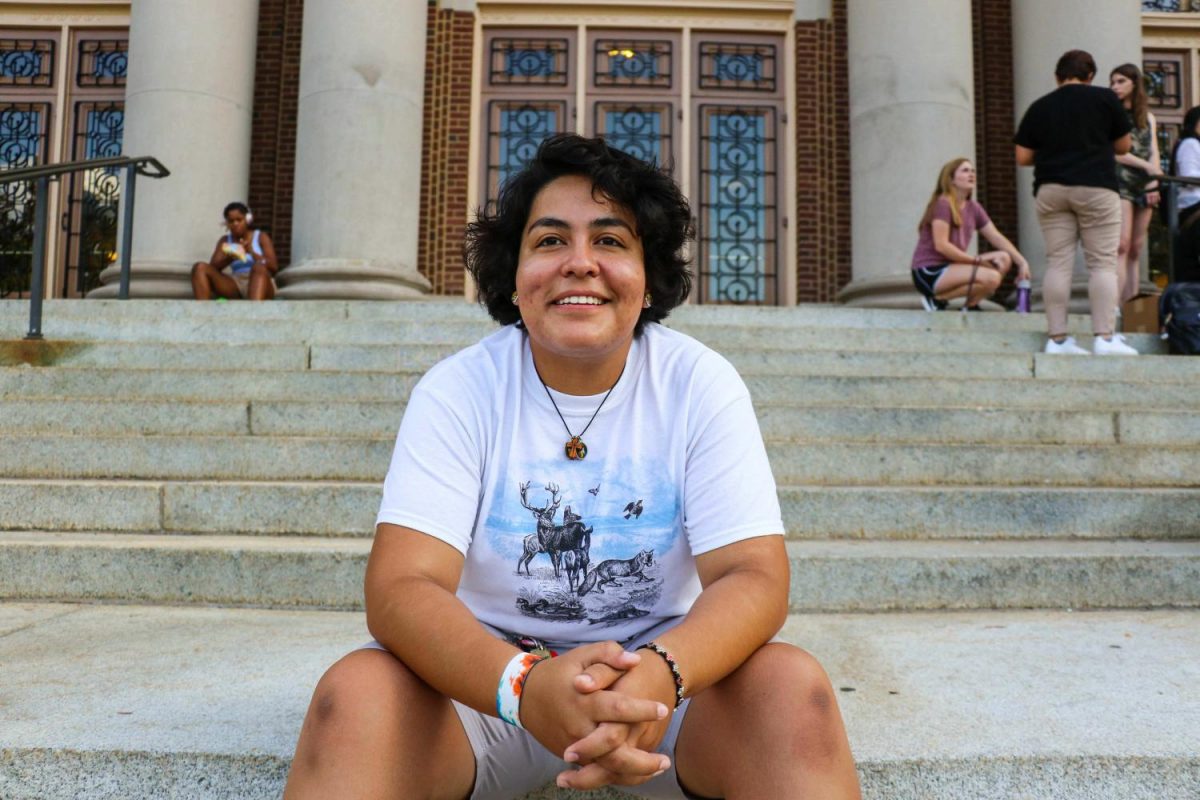 A portrait of Ana Rodas.

In Ana Rodas’ room, right next to her closet, she’s pinned a quote that reads, “With God all things are possible.”

The small decoration is just one element of a space that is not only adorned with words of encouragement but also pictures, letters and anything else Rodas holds dear to her heart.

The decorations make her room feel cozy and homey. But when taking a deeper look, each piece exemplifies a different part of her journey.

Rodas, senior in FAA, has made a lot of sacrifices to get to this point. As an undocumented immigrant from Guatemala, she is now within less than a year of graduating from the University.

“I think for me the degree is not just going to be (about) the countless hours and sleepless nights that I spent doing art projects,” Rodas said. “It’s literally the experiences I had with each and every person that I came in contact with throughout my four years here.”

“(The degree is about) the experiences I had with each and every person that I came in contact with throughout my four years here.”

Rodas has made a concerted effort to positively impact the lives of those around her, and she doesn’t mind sharing her own experiences to do it. As a student staff member at La Casa Cultural Latina, Rodas has spent numerous hours educating campus and community members about undocumented immigrants and the misconceptions that often follow them.

Even still, to some people, including President Donald Trump, that is not enough.

On Tuesday Sept. 5, Trump announced that he would rescind Deferred Action for Childhood Arrivals. DACA was first implemented during the Obama administration to protect individuals who entered the country without citizenship as minors.

The program permitted young undocumented immigrants to stay in the country, without fear of deportation, for a renewable two-year period. It also made them eligible for work permits.

Rodas’ work permit expires in 2019 and right now she is one of roughly 800,000 DACA recipients, also known as Dreamers, whose future in this country is now up in the air. Despite the unfavorable decision from the Commander-in-Chief, she remains calm.

Rodas remembers being consumed by fear the night President Trump was initially elected. But this time around, with a renewed faith in God, she is prepared to face any adversity that comes her way.

“I’ve experienced pain and suffering without Him, trying to do it myself,” Rodas said. “I ended up at the bottom of the barrel. (Now) that pain and suffering is coming back, but I have that support that I need to get through it.”

Rodas has spent 15 years living in the United States, and although she would like to continue, it’s not because she feels “American.” To her, that is simply a term.

When her parents decided to bring her here, it was more so about the opportunity to pursue higher education and a better quality of life. Both things have come true since her arrival, but even this country’s affluence hasn’t shielded her from its moments of divisiveness.

Rodas said her main goal is to earn her bachelor’s degree and continue on to graduate school. Beyond that, she doesn’t see herself spending the rest of her life in America because it’s been clear that she and other undocumented immigrants are unwanted. However, she did acknowledge that many others would elect to stay regardless of the opposition.

She doesn’t think that one decision is better than the other but believes that each individual – instead of being forced out – should have the right to choose.

Congress has about five months to come up with a solution for Dreamers, and it is yet another decision in Rodas’s life that is out of her control. She didn’t choose to come here when she was six, and at times she still imagines what it would have been like to grow up in Guatemala.

Though contemplating about the past hasn’t distorted her faith in the future. The obstacles are all a part of God’s plan.

“I honestly don’t think I would change anything,” Rodas said. “Every single moment, every single section of life … each one had its purpose in (my) life.”