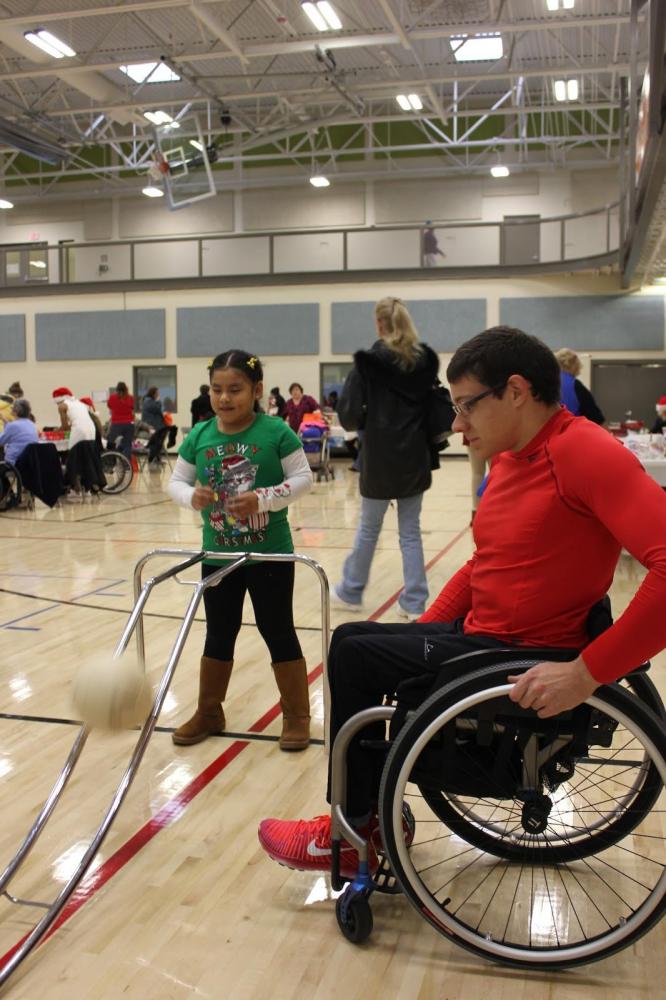 A holiday party hosted in December 2016 by Delta Sigma Omicron.

Established in 1949 at the University, Delta Sigma Omicron is the first disability services fraternity that welcomes any person with a disability. However, the fraternity has become less active in recent years.

Maureen Gilbert, coordinator of campus life at the Disability Resources and Educational Services (DRES), said the organization started out as an advocacy group but has turned into a service fraternity over the years.

“They went, and they did the sit-ins on the governor’s lawn and at the capitol in Springfield; they fought to have accessible entrances put on buildings and ramps put in,” she said. “They also went and did exhibitions at different locations and traveled around, promoting sports as an avenue of teaching people about disability.”

The fraternity played an important role in establishing what is now DRES, said Gilbert in a follow up email. However, the fraternity has been encouraging the students to go out and join other organizations on campus in the last five to seven years.

Martinez Johnson, master’s student in Labor and Employment Relations and former president of Delta Sigma Omicron, said the decrease in activeness is due to time restraints and difficulty in mobilization.

Gilbert said the fraternity used to host events for Disability Awareness Month in April, but that has gone away because there are now so many other awareness activities from other groups.

“Another contributing factor to the decrease in interest was the inclusion efforts of Alpha Phi Omega,” said Gilbert. “They invited the students from DSO to join APO, a much bigger service organization with more of a national recognition than DSO.”

The only remaining event that Delta Sigma Omicron hosts is the annual Holiday Party for children with disabilities in December. They have hosted it for over 40 years.

“This event is an opportunity for parents in the community to ask questions of our students,” Gilbert said in an email. “For the children who attend, it gives them an opportunity to meet our students and to see what is possible for them regarding school and living with a disability.”

The event gives the University students the chance to give back to the community, to interact on a more personal level with the kids and to build a relationship that continues through their time here on campus, said Gilbert.

Curran Brown, senior in AHS and a member of the women’s wheelchair basketball team, participates in the Holiday Party, alongside her teammates.

Brown said participating in the Delta Sigma Omicron Holiday Party also opened her up to many resources in the community as well.

“I wouldn’t have known about certain things like that without participating in it. It made me aware of the community and the resources they have in the community off-campus,” she said.

Johnson said that an event like the Holiday Party is important because of what it can give back to the community, and it can also help the regular community be more aware of the disability community.

“We have a unique opportunity to showcase the strength of disability throughout the community as well as being able to help those that are disabled,” he said.