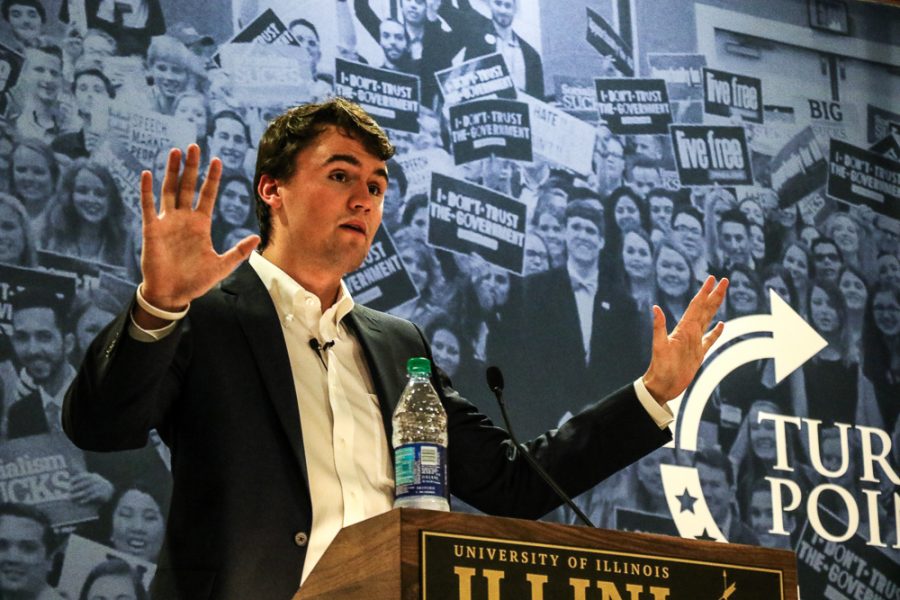 The event focused on capitalism and anti-socialism.

“Socialism is wrong, evil and ineffective and it must be stopped,” Kirk said. “Free enterprise capitalism is the most moral, effective and assured way to guarantee prosperity for all.”

One member explained the group’s intentions.

“What (Turning Point USA) is basically doing is a speech on why socialism sucks and also why college students are being called on campus and how we can use free market ideas to solve poverty,” said Joel Valdez, freshman in LAS and member of Turning Point USA.

Turning Point USA also looked at this event as a way to note the University’s reactions on the event.

“This is going to be a big test of the University’s acceptance of free speech on campus,” Valdez said. “I feel like the administration is doing great, but the students, on the other hand, are really the ones causing trouble.”

There were no outbursts during the speech.

Protesters from the International Socialist Organization gathered around Foellinger Auditorium at approximately 6 p.m.

“We want to protest Charlie Kirk because the views and policies he supports are harmful and discriminatory,” said Elizabeth Dean, freshman in LAS, organizer of the protests and member of the International Socialist Organization. “He supports getting rid of DACA, he supports building a wall on the border of Mexico (and) he supports the travel ban.”

Turning Point USA was aware of the protesters and welcomed them. Kirk wanted to hear from those who did not agree with his political beliefs.

The protesters also demonstrated against Turning Point USA’s posters, which had slogans such as “Socialism Sucks” and “I Love Capitalism.”

“Older conservative movements had trouble catching the eyes of young people, and so they were looking for different slogans and that were quick and simple to the point,” Valdez said.

Eventually, the protesters made their way toward the Illini Union and stood by the event’s entrance. The protesters could be heard from inside the event hall.

“I was on my way home, and as I was passing the Union I saw a group of people. They were chanting and they had signs,” said Ciara Johnson, freshman in DGS. “They were pretty loud at what they were chanting, and they were kind of blocking the doorway so people could not really get into that area of the Union where they were standing. But from what I saw, it was pretty peaceful for the most part.”

The event ended without any altercations. The protesters left before the end of the event.