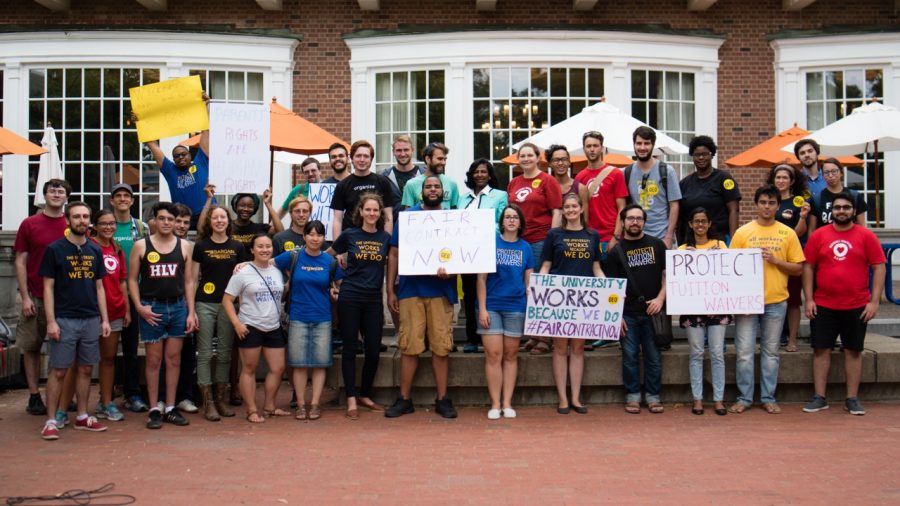 Graduate Employees’ Organization rally after their contract with Illinois administration expired on Aug. 16 outside the Illini Union.

The Graduate Employees’ Organization (GEO) has been working without a new contract since Aug. 15, and is currently bargaining with the University administration to settle on new terms.

Maria Garth, GEO’s communications officer, said in an email that most of their new contract remains to be negotiated. They have signed two agreements thus far: an expansion to the non-discrimination clause and a guarantee for more flexible parental leave for employees with children.

All terms of the past contract roll over except for the strike clause, which is meant to prevent members from going on strike while the contract is still in effect.

“Unfortunately, we don’t think the administration will be willing to budge unless we … continue to show them that we’re willing to take major action, including a strike, to get a fair contract,” Garth said.

At noon on Oct. 4, GEO held a march on the Swanlund Administration Building. Garth wrote that the march was successful, with more than two hundred people in attendance.

“This may sound cynical, but the reason they (the University) have not renewed our contract yet is because they’re prioritizing the bottom line over providing fair wages, benefits, and working conditions and creating equal opportunities for all graduate employees,” she said.

University spokeswoman Robin Kaler said in an email that the University has been meeting regularly with GEO throughout the past year to negotiate a new collective bargaining agreement, which would address the issues and concerns raised by GEO.

“(The University is) doing so in a manner that’s fair and responsive to represented graduate employees, while remaining cognizant of the operational needs and the economic constraints we face,” she said.

Patrick Kimutis, third-year graduate employee in English and member of GEO’s Bargaining Research Team since June 2016, said in an email that the University’s proposal for a new contract does not include any raises, increases health care costs and allows administration to reduce employees’ pay at will.

“It’s insulting – the administration always claims they want to create a diverse intellectual community, but if they had their way, higher education would be even more of a luxury only attainable by the ultra-wealthy,” he said.

Throughout the bargaining process, Kimutis said he has been working with his team to research the benefits that other graduate employees receive across the country to ensure that the terms GEO proposes are fair.

Kimutis said if the bargaining proves unsuccessful, the quality of education at the University will decline, as prospective graduate students will choose other institutions with more competitive benefits and compensation.

Zoë MacDowell Kaswan, second-year PhD student studying neuroscience, said she chose the University partly because she thought she would be offered an adequate living wage and tuition waiver. However, in an email, MacDowell Kaswan said she was disappointed with the administration.

“I used to believe that everyone in the University administration would care about education and students first, but now I see that they care about their bottom line more,” she said. “The kind of derision that we have experienced from the administration’s bargaining team has been very disillusioning.”

Garth said the minimum salary for graduate employees is $16,360, while the University’s published living wage is well over $22,000.

“And yet the administration has proposed not only denying us the raises we so desperately need, but reserving the right to lower our salary at will,” she said.

Garth said that most graduate employees would not be able to afford graduate school without the benefits they receive from being employees, such as tuition and partial fee waivers. Garth said this prevents members from quitting but creates stressful situations in which members have to worry about decent living standards, like being able to afford health insurance.

Garth also said that most employees would much rather devote their time to becoming better educators, researchers and scholars than fighting with the administration for fair terms.

MacDowell Kaswan also said that one of the main reasons she would not quit, aside from financial realities and avoiding student loans, is the fact that she enjoys her job as a TA and cares about her students’ education.

“I think that students are taught best by TAs who are financially secure, have adequate healthcare and are otherwise protected,” she said.

MacDowell Kaswan said that hiring TAs to oversee lab courses is the cheapest way the University can ensure that 300 to 400 undergraduate students can learn hands-on material in classes of 24 to 30. She said that if the University did not hire graduate employees, there would be no way those lab courses could exist.

MacDowell Kaswan said that the administration has proved willing to violate terms of their contract in the past, so even if a fair contract is agreed upon, members of GEO will still be working to maintain those fair conditions.

Editor’s note: The minimum salary has been updated to reflect the proper numbers and Zoë MacDowell Kaswan’s full name. The Daily Illini regrets these errors.