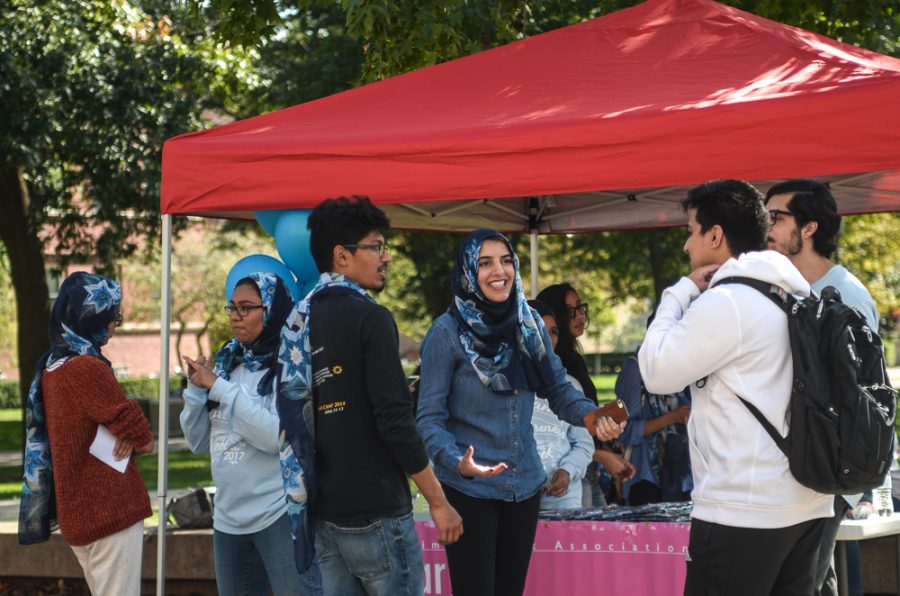 The Muslim Student Association promotes "Wear a Hijab Day" to kick off Islam Awareness Week on the Main Quad on October 9th.

The Muslim Student Association (MSA) is hosting Islam Awareness Week this week, which is dedicated to informing students about the religion of Islam. There will be a variety of events throughout the week centered around the theme for this year, “What Makes a Muslim: Exploring the Principles of Islam.”

Anushah Malik, junior in LAS and Social Work, is the Outreach Chair for MSA and said that this week is about showing people what being Muslim involves.

For Monday’s “Wear a Hijab Day,” MSA members passed out hijabs, encouraging students to learn about the practice of wearing a hijab.

“We basically pass hijab to girls so they can experience what it’s like,” Malik said. “Trying (on the) hijab and attending the events (can show) what (being) Muslim is about.”

That evening, MSA hosted an event in Lincoln Hall for a discussion on modesty. Malik said the conversation focuses on people’s experiences and the meaning of wearing a hijab today.

Throughout the week, MSA will host more booths on the Main Quad to foster conversation. On Tuesday, students will be able to spin a wheel containing different topics, such as prayer, fasting, charity, modesty and proclamation of faith for “Talk to a Muslim” Day.

“This week is our chance to show everyone what (being) Muslim is about,” Malik said. “Muslims are just normal people. You shouldn’t believe what’s on TV; that’s the wrong image.”

Afifa Chaudhry, freshman in Health Sciences, agrees with Malik on this week’s importance.