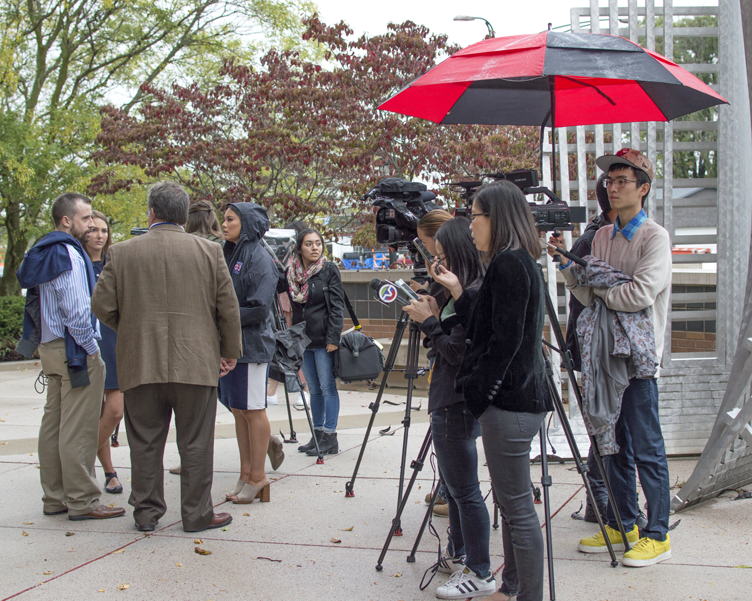 Members of various media outlets wait outside the Champaign County Federal Courthouse immediately following Brendt Christensen’s arraignment on Oct. 11. Christensen was charged with one count of kidnapping resulting in death and two counts of making false statements to the FBI.

Brendt Christensen pleaded not guilty in federal court today to the charges he is facing in the kidnapping case of visiting scholar Yingying Zhang.

Appearing before Judge Eric Long, Christensen is charged with one count of kidnapping resulting in death and two counts of making false statements to the FBI.

Through a public defender, Christensen pleaded not guilty to all three counts. This was his first appearance in court with his team of public defenders.

Zhang’s mother, crying hysterically, was escorted out of the courtroom before the arraignment started, and did not return for the hearing. This was her first time attending court since arriving in the United States in August.

Christensen only spoke to affirm he was competent in understanding the charges. He was taking both an anti-depressant and anti-anxiety medication. Rather than his past gray-and-black striped uniform, Christensen was wearing a green jumpsuit and orange Croc-style shoes.

He will go to trial Feb. 27, 2018. If convicted of kidnapping resulting in death, Christensen is facing either life in prison without parole or execution.