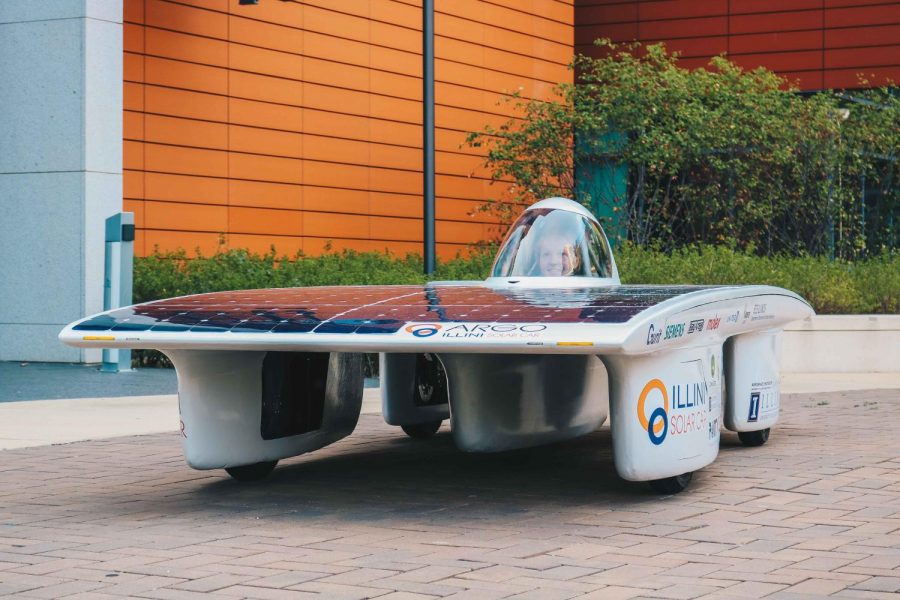 The prototype of a car is called “Argo” and it is currently competing in the Bridgestone World Solar Challenge in Australia.

Argo, the Illini Solar Car prototype, is surging through the Australian Outback for a seven-day race in the Bridgestone World Solar Challenge.

Jonathan Mullen, junior in Engineering and president of Illini Solar Car, said the race is 1,864 miles long and the cars will rely solely on solar power during the seven-day period.

Mullen said the goal for Argo this year is to finish the entire race.

“Most teams do not finish their first competition,” he said. “In fact, rarely do most teams even finish the competition whether they’re new teams or returning teams.”

Argo is the first solar electric car built at the University since 1997. Mullen said the car weighs roughly 500 pounds and can hold one person. Argo also has 391 individual solar cells on the top of the car.

According to Rafael Ridao, junior in Engineering and mechanical lead and vice president of Illini Solar Car, Argo broke some grounds when its designs were finalized, such as having the smallest frontal surface area of a single-occupant solar car, which is a key feature that maximized the aerodynamic performance.

“Argo is designed to travel on highways at highway speeds, and it’s the only student built car from the University that is completely road legal,” Ridao wrote in an email. “Expect to see it around campus once it gets back from Australia later this year!”

However, the experimental vehicles are not ready for everyday use, Ridao added.

“Single-occupant cars are designed to compete for speed, so any energy not spent on moving the car forward is wasted energy,” he wrote. “That means you won’t find any creature comforts like air conditioning or even an audio system in most challengers.”

“Solar cars are inherently expensive,” he wrote. “I won’t give specifics, but it’s pretty easy to find out that it takes at least six figures to build a solar car, and Argo is no exception.”

Mullen said one of the big challenges the team faced when preparing was finding a space large enough on campus to build Argo. Although the College of Engineering provided the team with some space, it was not enough to fit a whole car.

An alumni, who declined to be named, was part of Illini Solar Car back in 1997 and eventually helped pay for the space for one year to complete the development of Argo. However, Mullen said the process was delayed by the search for a space large enough.

According to Ridao, another major obstacle was administrative overhead.

“We’ve dealt with what we believe is a ridiculous amount of bureaucratic barriers along the journey to get Argo to Australia,” he wrote. “We feel like there were a number of unnecessary issues that other teams, particularly the top ones around the world, don’t have to deal with.”

Such obstacles stole the team’s time from dealing with important engineering issues and forced them to waste their time maneuvering a field of forms to fill and vague regulations, Ridao wrote.

However, both Ridao and Mullen agree Illini Solar Car gives the students out-of-classroom experiences with some ground-breaking technologies.

“From the massive amounts of research, designing, building, testing and then iterating the whole process to improve, we learn skills that classrooms couldn’t even dream about touching,” Ridao wrote.

“We saw this project as a way to support students eager to develop skills relevant to the renewable energy industry,” he said “Our hope is that some students involved in this project would utilize what they learned while working on Illini Solar Car to be better prepared to make a difference in the future.”

Electric vehicles are significantly more energy-efficient than gas and diesel powered vehicles and are able to use electricity generated from renewable sources, such as solar. Illini Solar Car is unique in that it pushes the potential of both solar energy and electric vehicle, Heyek said.

Ridao wrote that the process of developing Argo is made even more impressive because their hard work will be brought into the real world where it’ll drive next to regular cars.

“Ultimately, as impractical as a solar car is for now, I’d like to think we bring into fruition the hope for a brighter, greener future,” he added.

There are about 40 teams from about 21 different countries participating in the Bridgestone World Solar Challenge, Mullen said. Illini Solar Car is one of the eight teams from North America.