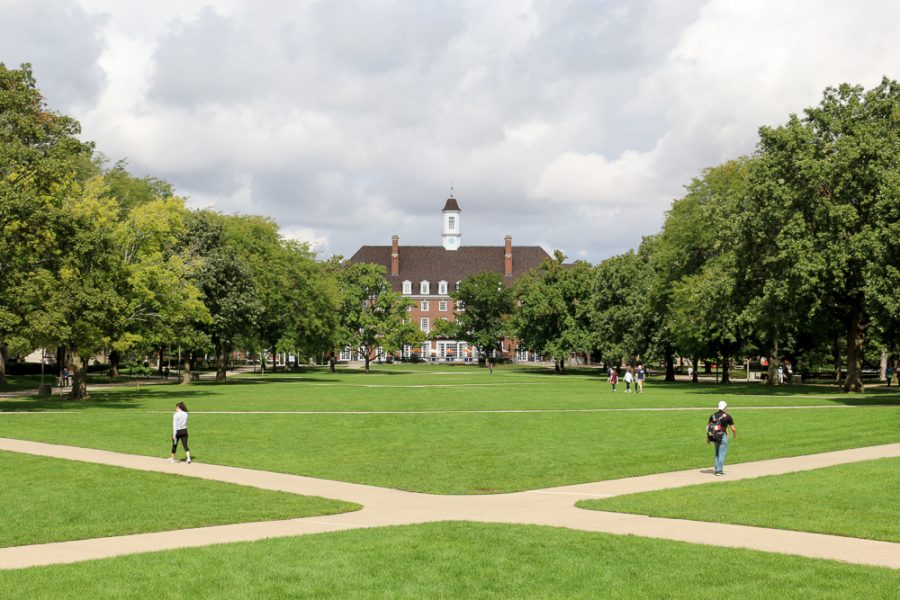 The Main Quad in the heart of campus. Design editor Cindy thinks this is a great place to relax and catch up with friends.

A retooling of the higher education system in Illinois is in the works.

Creating a streamlined, uniform online admission process for all public Illinois universities is one of the plan’s goals.

“What we’re looking for is trying to be more efficient in our applications to our schools to make it more universal,” Brady said. “Instead of each school making its students require an application, application process fees, transcript fees. For (high school students) to stay in Illinois, we have to make it easier for them to do so.”

In addition, any new programs created at all Illinois universities will be put through “economic efficiency review.” With this, the Illinois Board of Higher Education will analyze any new programs at all public colleges in order to decide which programs get financial support, and where other funds could be cut.

On Sen. Brady’s website, he specifically calls out the University of Illinois at Springfield for adding a new $82.6 million STEM building to its campus. Though the proposal by  the UIS campus officials states that their building is looking for $65 million, Brady mentions on his website that other Illinois colleges such as Northern and Western Illinois have their own STEM programs that need funding.

“The decline of public education funding, higher education, has been seen over the last few years,” Brady said. “What funding they are getting, they’re appropriating directly to different things other than maybe the use of technology to help streamline their application process.”

The Executive Director for the Office of University Relations Tom Hardy says that the University of Illinois has had a 5.2 percent decline in state funding from 2005 to 2015. This has resulted in an increase in tuition rates, with revenues from tuition and fees has gone up 155.5 percent, about $668 million.

“Initially, rates were increased to help offset some of the reductions in state appropriations … but we have held tuition flat for incoming resident students now for three consecutive years,” Hardy said.

The Brady-Rose plan also aims to guarantee all Illinois high school students with at least a B average admission to one of the Illinois public schools, provided that they can keep up their academic performance through college graduation.

“By saying that more students could attend public universities, if they don’t get their first choice or they’re still a B student, that means they can be directed to other schools,” Brady told The Daily Illini. “Which still means the overall system in the higher education of Illinois could still be the winner by that student staying in Illinois.

According to the latest data by the National Center for Education Statistics, Illinois trails only New Jersey for losing high-school students to out-of-state colleges. At their legislation announcement, Rose and Brady said that from 1991 to 2014, enrollment at Illinois universities has decreased by 50,000 students.

“It affects the state of Illinois by some of our best and brightest going elsewhere for higher education, so it affects it. It affects potential revenue to those schools for tuition dollars. If they move out of Illinois, statistics show that they generally don’t return,” Sen. Brady said.

The University of Illinois system has tried to sustain this number, with their introduction of Invest In Illinoisans, a financial aid initiative to get more assistance to in-state students to curb the number of high school graduates going out of state. Hardy also said that Tim Killeen, president of the University of Illinois system, teamed up with presidents from Southern and Eastern Illinois University for a fair with southern Illinois high school students to talk about staying in state.

Sen. Brady, a representative of Bloomington-Normal, said one of the main public colleges in his district is Illinois State University. He said that he has had discussions with administrators, deans and professors there, and while they may have hesitations, he said across the board that something has to be done about the higher education system.

“I think if parts of this, any or all parts of this would become law, I see it affecting hopefully in a positive manner, all of our nine Universities and the twelve campuses,”  Brady said.”If we can keep students in Illinois, no matter what institute of higher education they’re going to, it’s better for schools all around.”