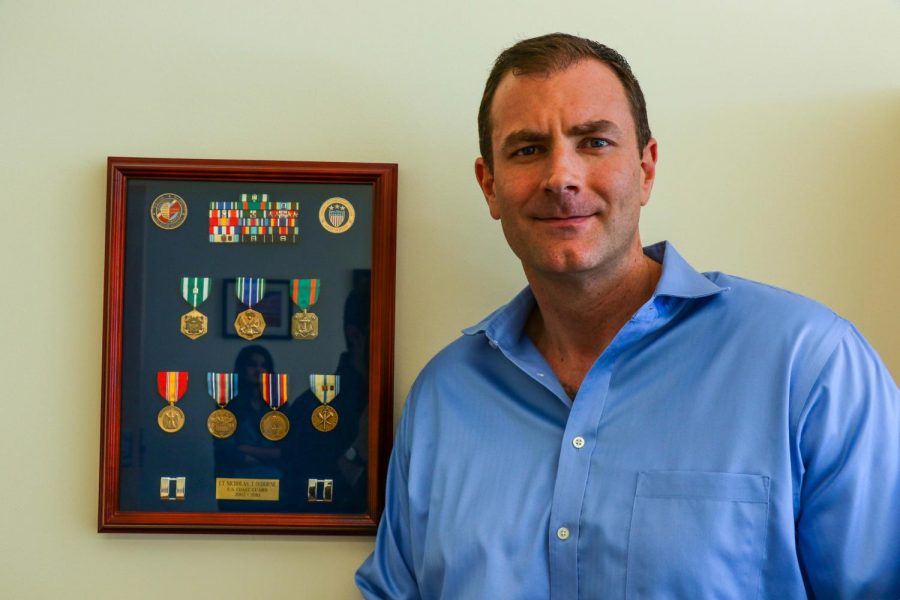 Nicholas Osborne was once a Coast Guard intelligence officer who served overseas in Kuwait and Iraq, before heading to Champaign.

Osborne is now the director of the Chez Center for Wounded Veterans in Higher Education on campus. The center offers a variety of services for military-connected students, such as those enrolled in the Army, National Guard and more. Those services include career assessment, counseling, physical/speech therapy, residential services and academic advising.

“The center is the most comprehensive resource in the country for military-connected students,” he said.

Osborne, and many others like him, are exactly the people Caitlyn Schneeman, junior in Social Work, and Nick McCormick, sophomore in DGS, said they enjoy spending their free time with. At Harlem High School, Schneeman and McCormick were involved in the Harlem Veteran Project, which entailed going to different veteran events in the community and creating documentaries about veterans.

“We both went on a trip called Vets Roll where we go with veterans to Washington, D.C.,” McCormick said. “I think it was a really cool experience for us to connect with veterans and had a lasting effect on us.” The two are starting a similar program this year, called the University of Illinois Veteran Project. Their goal is to interview veterans and then produce documentaries about them for their families or for public use if the veterans so choose. The first veteran McCormick made a documentary for was a Vietnam War veteran who came home from the war to protests, which made the veteran feel unwelcome.

“I think it’s OK for people to protest the war, but support for soldiers should be important,” he said. Osborne said there are many assumptions about veterans, such as they engage in heavy combat and kill others, when there are actually a range of duties in the military, from cooks to search and rescue.

Thus, another goal of the project is to provide an outlet for veterans to tell their stories, allowing them to clear up any misconceptions.

Schneeman said that by sharing their own perspectives, veterans contribute to the broader narrative of history.

“It’s a good way for students who are interested in history or interested in the military to hear stories from a firsthand perspective,” she said. McCormick said the perspectives of veterans add a personal element to the wars seen on television or read about in textbooks or articles.

“I think that sometimes when you’re watching war on the internet or through TV, you lose the human agency that these types of situations can greatly impact people’s lives permanently,” Osborne said.

Schneeman and McCormick encourage all veterans, whether active or not, no matter their branch of the military, to share their stories and perspectives and reach out to them.