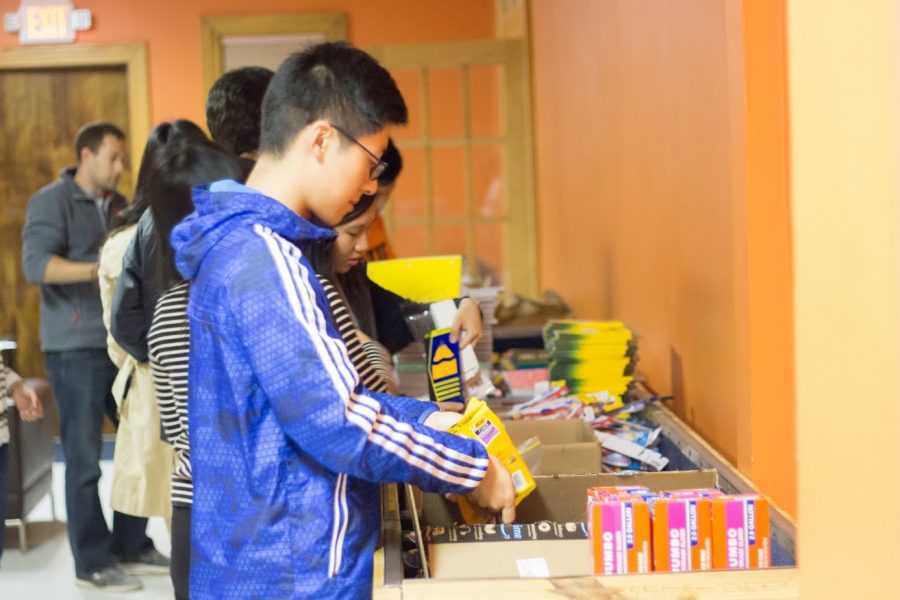 Students organizing school supplies on Oct. 27, 2017 before they are boxed and sent to Syrian refugees.

Bridges International at UIUC conducted a Packing Party on Friday for its third annual campaign for Syrian refugee children and helped send carepacks of school supplies to them.

Volunteers were asked to buy supplies and pack the carepacks at the event. The completed packages will be sent to Lebanon by Chicagoland Immigrant Welcome Network and to Jordan by Gain USA.

The carepack includes pencils, pens, notebooks, rulers, a group photo and letter from Bridges International, among some other items.

Jessica Yu, junior in FAA, is one of the members of the promotion team.

“I feel grateful that I have the opportunity to do something for Syrian refugee children,” Yu said.

Schrader said the Syrian Civil War is the worst humanitarian crisis in his lifetime. He said over the past 40 years, the displacement of people – including hundreds of thousands of children – cause a generation to miss out on education.

“Bridges International would love to cut through politics and cut through differences,” he said. “We just want to help with children who are in need of help.”

Bridges International is designed as a Christian movement. It has a team of 12 people to serve 13,000 international students on campus. The children of Syria campaign is one of their main events this year.

Schrader said they don’t see people get involved in the level the group wants if they just send out a link for people to donate money.

“Instead of asking for money, we asked students to dedicate two Fridays at a time to come and get motivated about what we are doing,” he said. “When students come and buy physical supplies by themselves, they might care for the children in Syria much beyond just a weekend in October.”

Normally, at any given week, 35 to 40 students get involved in the campaign of Bridges International.

Jayne Allen, freshman in ACES, participated in the Packing Party, and said she hopes Syrian refugee children can get the packages she helped with.

“I was born in Illinois, and it makes me feel kind of guilty that I have privilege but these refugees don’t,” she said. “It makes me feel better while helping people in need.”

Tony Burrell, executive director of the Chicagoland Welcome Network, gave a speech at the Packing Party explaining the meaning of this event.

“There are 20 to 60 million refugees worldwide in 2017, and only 45,000 refugees come to America this year, which is 0.1 to 0.2 percentage of the total number. It’s a very small number and it seems that we are not doing anything,” Burrell said.

Burrell stated he started to help with refugees since 2014, and he plans to help those refugees as long as he can.