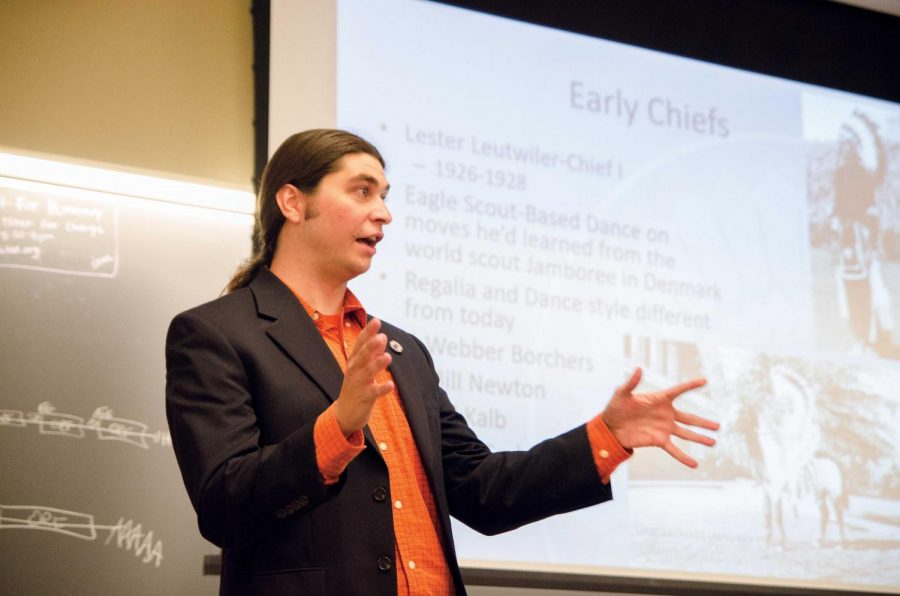 Ivan Dozier, the unofficial Chief Illiniwek from 2010 to 2015, spoke of an Illini Republicans meeting Thursday in Lincoln Hall. Dozier informed those in attendance of the general history of the Chief, how it was started, how it was carried out and why it was retired. Currently, the Native American Guardian Association and others are encouraging the authentic use of the Chief.

Saturday’s football game against Wisconsin was preceded by a Native American dance performance to show solidarity with the use of Chief Illiniwek’s likeness on campus.

The performance featured an Honor Song in respect for war veterans and both a women’s traditional and a men’s traditional Native American dance. It ended with a Unity song, in which the crowd of over 50 people joined hands and moved in a circle to a slow beat.

“That’s mainly how most people on reservations view it: They like it; they’re proud that they want to use our name and show our heritage,” said Eunice Davidson, a member of the Spirit Lake Sioux tribe. Davidson is a board member of NAGA.

The event was primarily in defence of keeping the “Fighting Illini” as the University’s official football team name.

“We agree that sometimes the symbols that have been used are not appropriate,” said Andre Billeaudeaux, executive director of NAGA. “But the idea is to educate, not eradicate, and the idea is to improve what you have but never give up the opportunity to teach about Native Americanism.”

The organization has traveled to other states to preserve the symbolism used.

“We want to support keeping the Fighting Illini. We’ve gone many places. We ended up going to Michigan to save the Redskins name, and the vote eventually saved it there,” Davidson said.

Ivan Dozier, board member of the Honor the Chief Society and unofficial Chief Illiniwek from 2010 to 2015, was also in attendance.

Dozier said the Honor the Chief Society was looking to partner with NAGA to make sure honorable representations of Native American culture are celebrated rather than destroyed.

“They’re here to stand and support Illinois in the way that it celebrates its Native American imagery, and we’re here to secure the movement and the Chief’s return,” Dozier said.

Davidson said that although she supports the Chief, she doesn’t think it’s completely authentic.

Beasley said that although the logo is nice, it could be altered and that he doesn’t support people wearing the Native American headdress without understanding what it stands for.

“The headdress is something for a warrior in Native America to earn … (the design) is a more North West design,” Beasley said.

David Davidson, Eunice Davidson’s husband, said the beauty of Native American culture was under attack because of people who want to change the football team’s name.

“There is nothing derogatory about Native Americans,”David said. “I cry every time I see the dancers coming out and hear the drum beats, because that is who they are and that is what is under attack. The ultimate goal is to get rid of Native Americans and that breaks my heart.”