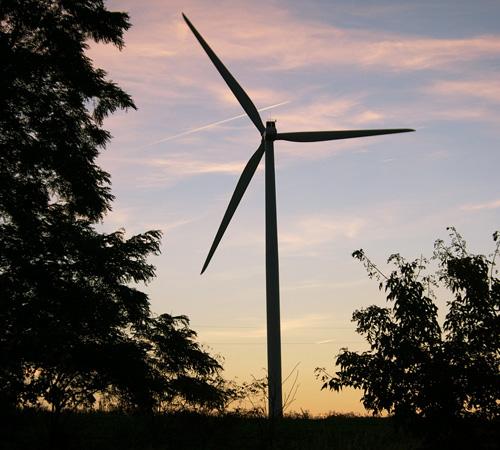 Wind power and other renewable energy sources are playing an important role in keeping the University’s campus sustainable.

For about a year now, the University has been purchasing wind power from Rail Splitter Wind Farm LLC. The University will continue to purchase power until their contract ends in October 2026. The Purchase Power Agreement is thought to lower the carbon emissions of the University.

According to the Illinois Climate Action Plan (iCAP), 100 percent of carbon emissions are supposed to disappear by 2050.

“This is a very strong message for us,” said Xinlei Wang, professor of Agricultural and Biological Engineering and chair of the Sustainability Working Advisory Team.

The SWATeam is a group of faculty and students that monitor iCAP to make sure the goals are being met.

“Our primary goal for our campus is to become the global molder of sustainability by creating effective, positive change,” Wang said.

For example, a goal set by iCAP is to use about 120,000 megawatt-hours from low carbon energy sources by the fiscal year 2020.

This goal will be met by using multiple energy sources such as solar power and wind energy.

The PPA will generate about 25,000 MWh per year for the next nine years, this is about 8.6 percent of the total energy produced on the wind farm.

Nick Heyek, chair of the Student Sustainability Committee, said that he thinks the University will use more wind energy even after the 10 years are up.

“Most likely, this will be necessary to meet the 2050 carbon neutrality goal,” Heyek said.

Claire Kredens, campus sustainability intern, acknowledged the amount of flat land in the state makes for a good wind farm.

“Wind power is a good source of renewable energy in Illinois because of how flat the state is and how much open land we have,” Kredens said in an email.

Purchasing wind energy will not only help the environment but help Illinois’s economy as well, she said.

“Converting to renewable energy isn’t an option in my opinion, it’s a complete necessity,” she said. “And it needs to be implemented before it’s too late for the people of our planet, and more importantly the planet itself.”

If the rate of greenhouse gasses going into the atmosphere were to continue as is, said Heyek, the effects of climate change will expand.

Wind energy is becoming far more popular, and if it continues to grow as it has been, then it will end up being cheaper as well, he said.

“Wind power is rapidly growing in scale, and as a result the price is dropping,” Heyek said. “It is entirely possible that wind power will end up being the most cost-effective source of power for our campus in the near future.”

The size of the campus and the age of some of the buildings calls for a lot of energy use. This causes the carbon footprint to be larger, said Kredens.

However iCAP, the Institute for Sustainable Energy and Environment and the SSC, have worked hard to make sure sustainability is improving throughout campus, according to Kredens.

“The University is doing a good job at committing itself to sustainability,” Kredens said.

Sustainability is a campuswide effort and will help life on campus and the planet in the future.

“Everyone must do their part,” Heyek said. “But the University has an important role in society, and should lead by example.”