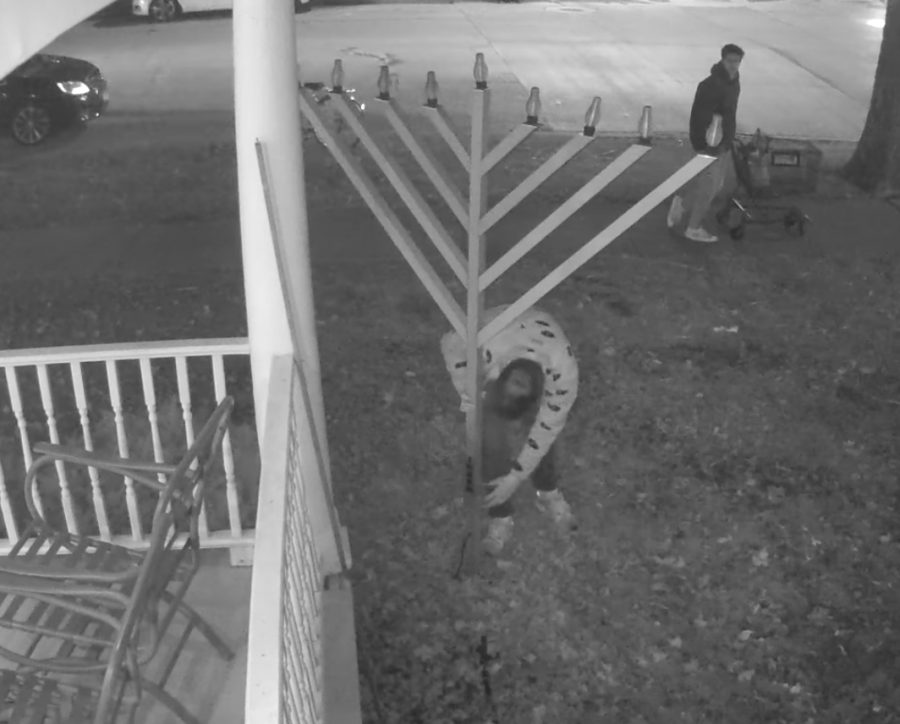 Two people caught on camera vandalized a menorah in the front lawn of the Chabad Jewish Center. The center is working on creating a more durable structure, which should be completed by Hanukkah of this year.

Security cameras outside of the University Chabad Jewish Center captured a video of two students removing a branch from the building’s menorah structure on Oct. 27.

This is the fourth time since 2015 that the menorah has been damaged.

According to a report made by the University of Illinois Police Department on Nov. 6, “The preliminary charge of criminal damage to property is a Class 4 felony because it happened at a place of worship.”

Both of the people identified in the video, University students Jacob Bassler and Nicholas Gustafson, were issued court summons.

Through his attorney, Bassler declined to comment.  Gustafson’s attorney did not respond to comment at the time of publication.

As a response to the menorah vandalism, the Chabad Center has kick-started the plans for a new menorah, which they hope to complete by Hanukkah of this year.

“It is going to be even bigger and better.  It will be something that won’t be easily dismantled,” Kurtz said.

Assistant Rabbi Mordy Kurtz was on staff with the Chabad Center when the first incident of damage occurred in 2015.

“The first time it happened, it was very uncomfortable. This is where we work. This is our center.  It is a safe place for people to come and express their Judaism, and be who they want to be.  When someone is intruding on that, it makes for a very unenjoyable experience,” Kurtz said.

Charlotte Spiro, student board member of Chabad and sophomore in AHS, agreed these types of events create discomfort.

“The first time I was told about the most recent incident, I was pretty shaken up because Chabad is somewhere that I go a lot and I do not ever want to be faced with fear in the place that I feel the most comfortable in,” Spiro said.

Spiro first heard about the incident via Facebook, but soon received a message from Rabbi Dovid Tiechtel confirming the event.

Soon after, Spiro viewed the security footage that caught the vandalism on tape.

“When I first saw the video, I immediately got goosebumps. I was disgusted because I have always thought that we were on a campus full of people that are above things like this and that respect one another, but clearly this act showed that that mutual respect does not always exist,” Spiro said.

Spiro said the University has been striving to give the Jewish community more of a voice on campus.

“Our community has found a way to reverse our frustrations in a way that empowers us in a more positive way, and quite honestly this has brought us together,” Spiro said.

Kurtz said that the center is continuing to enable safety measures to ensure that those who visit feel physically and emotionally secure.

“Obviously the cameras were amazing. The response of the Champaign Police Department and University was very quick, which is a great reassurance of security. We have also updated our lock systems,” Kurtz said.

Spiro hopes that the security footage will raise awareness of the harm acts like this can cause.

“Clearly, we cannot stand outside 24/7 to ensure that this does not happen again, but our identification system worked and hopefully people realize that this is not something that we are going to accept and it certainly isn’t okay,” Spiro said.

The menorah is one of the most important symbols of Judaism dating back to the times of the temple.

Both Kurtz and Spiro agree that the Chabad Jewish Center and its community will continue to move forward with strength.

“This can only make us stronger as a community and we are taking all of the right steps to make sure that this does not happen again,” Kurtz said.