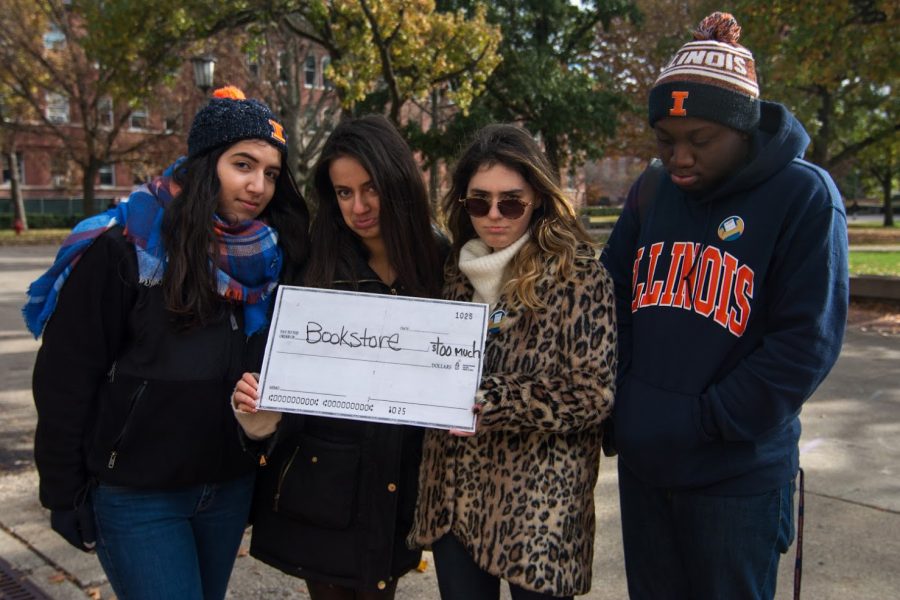 Students from the Illinois Student Government hold a booth to support open-sourced textbooks for University of Illinois students in front of the Illini Union on the Main Quadrangle.

As the semester nears its end, discussion on textbook purchasing has begun. Illinois Student Government is hosting an event today to discuss alternatives to traditional textbook use and address the concerns of expensive textbooks at the University.

The event, “I-L-L Never Pay That Much for a Textbook,” will be at the Main Quad in front of the Illini Union from 11 a.m to 2 p.m.

The main alternative to traditional textbooks that ISG hopes to implement is open-source textbooks, a free platform of access to textbooks that allows faculty to publish their textbooks under an open copyright license.

This option has been supported by professors at other campuses across the country including the University of Minnesota, explained Shaina Hakimian, junior in Business and chair on the ISG committee for academic affairs.

“Students are paying between $200 to $300 per textbook per semester on top of already paying so much in tuition,” Hakimian said.

Ariana Ademi, freshman in LAS, rents her books from Chegg since it’s usually a cheaper option.

“If I can’t find (them) available for rent then I will buy them from the University, but they are too expensive,” Ademi said. “If it’s more affordable, then students will be more likely to buy them, which will give the University more money.”

However, there are no alternative ways to purchase textbooks for some students. Isabel Londono, freshman in Fine and Applied Arts, said some of her books were only available at the University.

“I don’t really have a choice but to purchase the textbooks to do well in my classes,” Londono said. “We don’t know what the textbooks are ahead of time, so I remember calling my mom the first week and saying ‘OK mom, can you put $500 in my account? I need to buy my textbooks.’ It’s just really hard.”

Jose Loazda, freshman in FAA, notes that many books are published by the University, and that professors expect a quick turnaround to purchase books right away.

“I have to make a pros and cons list for each book like, ‘Do I really need it?’” Lozada said. “A lot of classes’ curriculums follow the books, so if you don’t have it, then you cannot follow along.”

Ashley Garcia, junior in Education, said she sometimes just asks classmates to borrow their textbooks, or sometimes she will split it with someone.

“I have rented textbooks through the University a lot, but I would buy them if they were cheaper,” Garcia said. “It would be a lot easier just to have them though. We need them for our classes in order to study and pass.”

“I-L-L Never Pay That Much for a Textbook” is aimed at acquiring signatures for a petition to implement open-source textbooks at the University.

“We have not had any resistance so far from the administration,” Hakimian said. “This option can work in tandem with the bookstores and will not be ‘driving anyone out of business.’”

Hakimian hopes that open-source textbooks can be adopted by the University within a few years, and said that some libraries on campus have already began using this resource, which has been successful on other college campuses.

“They would have to be a lot less expensive, to the point that I don’t see it happening,” Eicken said.