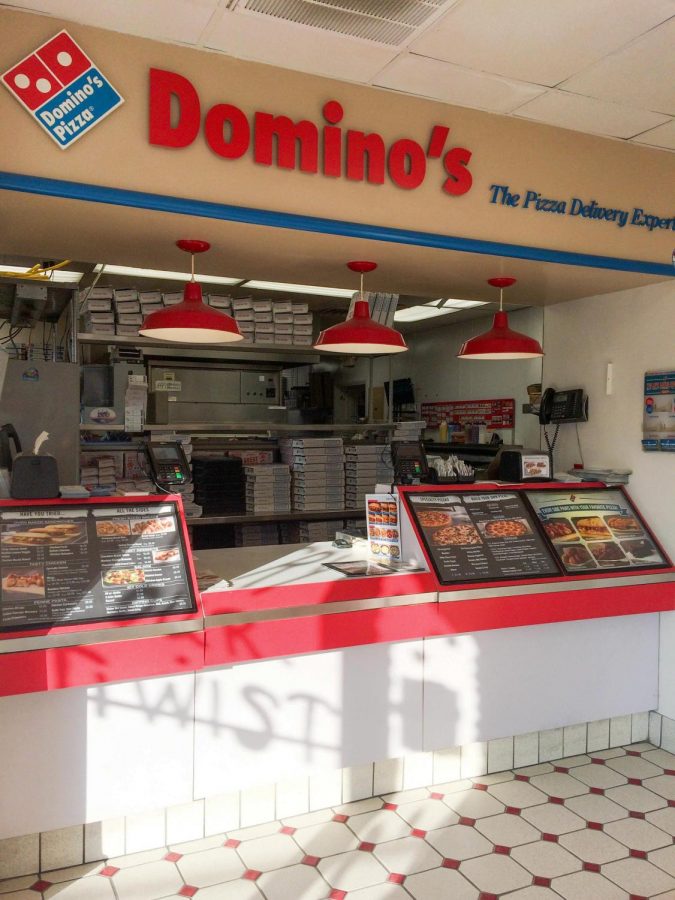 Domino’s pizza shop located on the corner of Green and First streets Nov. 9. The restaurant temporarily shut down in July after health inspectors found sewage backed up into the building.

The Champaign-Urbana Public Health District plans to abandon the scoring system in food facility health inspections while continuing its effort in standardizing the inspection process.

Any score below 36 is a failing grade and will require the facility to be reinspected.

Sarah Michaels, food programs coordinator at the CUPHD, said Illinois has recently adopted the FDA food code, which is the leader in food safety, as its new standard.

“(The inspection report) will have how many repeats, and then you take how many critical (violations), and match it up with a table, and that will determine whether a reinspection is required, if you’re passing or that you’ll be closed,” she said. “There will be no score.”

The table is still being worked on and has not yet been made public. According to Michaels, the current Food Code used by the CUPHD is not up to date.

The current health inspection for food facilities is based on a score out of 100 and the number of critical violations.

A score below zero or an imminent health hazard, such as no running water, sewage backup or severe pest infestation, constitutes as automatic closure of the facility.

“We do a raw score, but then every critical violation that a facility receives is an additional five points off each, and every repeat is an additional two points off,” Michaels said. “Because of that adjusted scoring system, the way we have it designed right now, if you have a large amount of critical violations and there’s no managerial control, that’s usually where you’ll see a facility fails below that 0 percent.”

Michaels said the number of inspections a food facility receives is based on its food handling and the risk classification.

“The main thing we tried to do with training is that we’re consistent across the board, so each inspector goes through standardization process, and we do joint inspections, and we actually have weekly staff meetings to discuss violations where they should be written up,” Michaels said. “That is our biggest issue that is with training and consistency.”

Michaels said the CUPHD has been trying to combat the problem for years, but it is an issue that requires constant retraining.

Mohammad Al-Heeti, owner of Strawberry Fields Cafe at 306 W. Springfield Ave., said the store has been inspected at least four times since 2015, and there are some variations in the health inspection standards, depending on the person and inspector’s interpretation of the law.

“Since we are a natural and organic food store, and we care about the health of the customers, we tried to follow all the rules and regulations,” Al-Heeti said. “Usually we get different inspectors. We don’t get the same one over and over. One time you find a different inspector, which is tougher or less tough than the others.”

Strawberry Fields Cafe received a score of 23 and six critical violations when it was routinely inspected on July 26, according to CU-CitizenAccess. The store passed its reinspection on Aug. 22 with an adjusted score of 84 and zero critical violations.

Al-Heeti said some plastic bottles left over from the previous owner was found in the storage area during the inspection.

“I’m not denying some other critical violations, but it will not take us to a failure levels without these plastic bottles,” Al-Heeti said.

Al-Heeti said the store was reinspected without warning and received a raw score of 92, but later dropped to 84 because of some boxes on the floor in the cooler and freezer.

“I don’t have any resentment against them. (It is) the opposite, actually I love to see them coming because they come and educate my employees,” he said. “I believe in the place has to be sanitized and clean and healthy. What they’re doing, they are doing a great job.”

Drew Starkey, owner of Bacaro, said in an email the process reminded them that although they have a clean track record throughout their 17 years in the community, they still must always strive to keep the standards  they set for themselves.

“Although we may see things differently from time to time, we respect the health department and the job that they do for our community,” Starkey said. “While we look forward to the upcoming changes to the health department and their inspection scoring system, our steadfast and resolute dedication to understanding the process clearly will remain among our top priorities.”