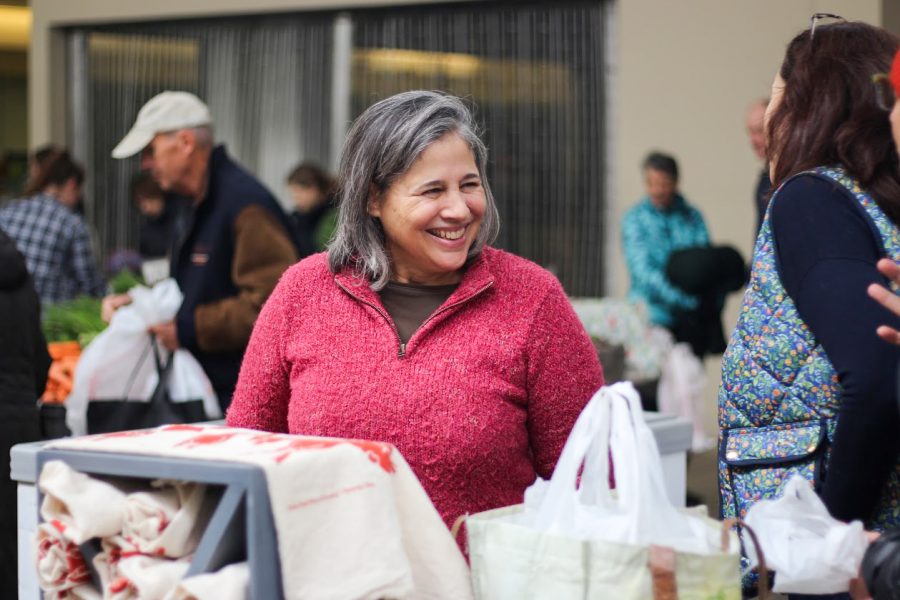 Leslie Cooperband, co-owner of Prairie Fruits Farm & Creamery, sells dairy products at the Urbana Market at the Square in Lincoln Square Mall. Some female farmers have faced gender discrimination within the farming community.

When Mallory Krieger bought her 85-acre vegetable farm, her closing attorney expressed disbelief that a woman could run her own farm.

“Oh honey,” Krieger recalls her closing attorney saying, “a farmer around these parts is a man standing out and looking at his fields.”

Agricultural fields are often passed down from father to son, said Krieger. Female members of farming families often aren’t given the same opportunities to learn about equipment and techniques crucial for farming.

“But mostly I think that the reason only 30 percent of farmers are women is because it’s just not seen as something women can do,” Krieger said. “There isn’t as much societal support for a female farmer.”

According to Krieger, women who have muscled their way into the agriculture industry do so by asking questions and finding resources that don’t come as easily as they do for their male counterparts.

Krieger is now a farmer training program manager at The Land Connection, a nonprofit that educates and supports farmers. Part of Krieger’s job is to manage the workshops, courses, field days and conferences that educate students in running a farm.

“I want to provide a venue for women to feel supported in community agriculture and feel more at home,” Krieger said.

When Maggie Taylor,  founder and co-owner of Delight Flower Farm, needed help creating a business plan and putting a fence around her sunflower fields, she turned to the training courses, workshops and sense of community provided by The Land Connection.

“I found that farming is a lot about community,” Taylor said. “I haven’t experienced a lot of sexism in the local farming community. I actually know a lot of strong female farmers and they’ve taught me a lot.”

Leslie Cooperband, co-owner of Prairie Fruits Farm & Creamery, has worked with The Land Connection to host farmer training for over a decade.

“I think the physical nature of the work can be a little overwhelming, but I don’t think that female farmers face challenges that are different from our male counterparts,” Cooperband said.

Although Taylor hasn’t experienced sexism in the local farming community firsthand, she worries others outside of her community may not see her as a legitimate farmer because of her gender.

“I don’t think sexism is necessarily unique to farming, but since we think of farmers as men, there’s an even bigger gap to close,” Taylor said.

Krieger said the most common struggle female farmers face is the lack of tools and equipment suitable for women’s body types.

“All of the tools and clothing for farming are designed with men in mind,” Taylor said.

“It’s hard to find a good pair of work pants that is made for women’s bodies or even tools that are the right height.”

Krieger and Taylor adapt farming equipment made for men. For example, they change the way they store heavy implements so people with a decreased muscle mass can access them easier. They adjust the heights of produce washing tables and also add padding to farm equipment which require users to lie down.

Some companies, such as Duluth Trading Company, have begun creating products specifically for women since they typically have a lower center of mass than men. Krieger said the hoes, rakes and shovels with shorter heights and lower grips help women function more efficiently than using the larger versions.

“There’s little hacks and accommodations you can make so that the tool’s more comfortable for you to use, but there’s still a lot of progress I think to be made in the world for accounting for women farmers,” Krieger said.