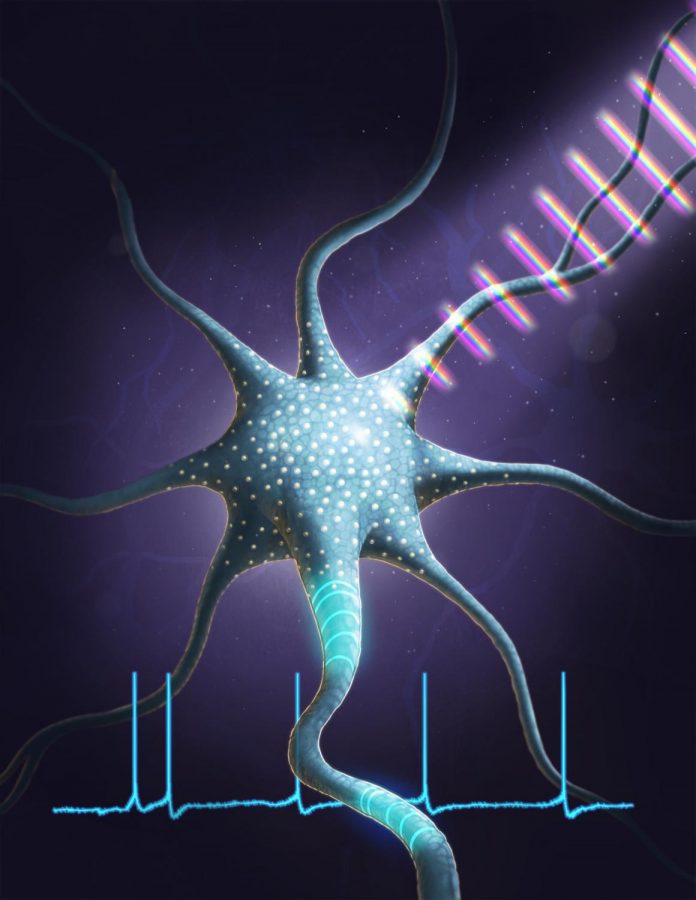 Illustration Courtesy of Stephen A. Boppart

Dr. Stephen Boppart, professor of electrical and computer engineering and of bioengineering at the University, and a team of researchers have published a study on neuron control in the journal Nature Physics.

According to the study, the researchers were able to induce neurons to fire by using pulses of light. Rapid pulses of different wavelengths caused light-sensitive channels in neuron membranes to activate, allowing ions to pass through.

The researchers were able to vary the patterns and wavelengths of the pulses to trigger different responses in the neurons, giving biophysicists using a method known as “coherent control,” control of a living cell for the first time in history.

The study used optogenetic mouse neurons, which are cells that had a gene added to make them respond to light, but Boppart is hopeful that the methods can be applied to naturally light-responsive cells as well.

“There are many naturally photoresponsive cells in the retina, as well we in biological processes light photosynthesis,” Boppart said in an email. “These naturally-occurring cells and structures evolved with exposure from our solar spectrum, and we are finding that they may respond in new and different ways to the special tailored light that we can generate.”

The team sees a wide range of potential medical applications for this technique, ranging from regulating circadian rhythm to affecting mood.

Boppart said the field of optogenetics will largely be confined to neuroscience research in the near future.

According to Boppart, there are some efforts attempting to genetically modify human retinal cells to make them photosensitive again, to help treat low-vision and blindness, but genetic modifications in humans are risky and potentially unsafe.

Boppart said there will likely be new types of photoactivatable drugs or molecules that can be targeted to cells, and then turned on or modulated with light.

“Ultimately, this could be a gene-free, drug-free way of regulating cell and tissue function. We think there could be … methods of treating patients with light,” Boppart said in a press release.

The funding for this research was sourced from the National Institutes of Health and the National Science Foundation. The team’s work has also been supported by a Beckman Seed Grant, and they recently received funding from the Air Force Office of Scientific Research to investigate these effects of coherent control in the retina.