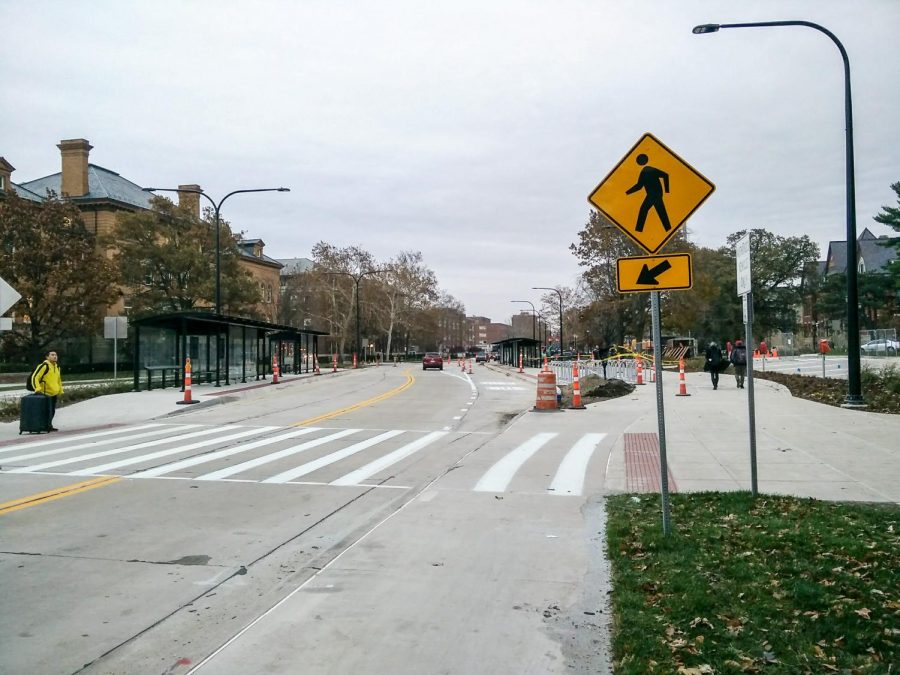 The long-lasting construction on Green Street has begun to clear up, revealing new bus stops in front of the Union on Nov. 17, 2017.

By the time students return to campus for the spring semester, construction along Green Street between Neil and First streets will be complete, confirmed Kris Koester, administrative services manager & public information officer of City of Champaign Public Works.

The final completion date for this phase of construction remains Nov. 2, 2018.

The construction on Green Street is part of the Multimodal Corridor Enhancement project, or MCORE, which is a $42 million project unprecedented in the community’s history, according to the MCORE fact sheet. The University, as one of the four major partners, contributed $3.6 million for the cost of the project.

With more than 80 percent of Champaign-Urbana area jobs located within about one mile of the project corridors, MCORE seeks to exert a transformative impact on the local transportation. Koester said MCORE hopes to bid out further projects on Wright Street/Armory Avenue and Green Street from Lincoln Avenue to Race Street in October 2018.

Koester wrote in an email that the construction has experienced various delays, most notably due to the spring rain of 2017 and the Illinois state budget impasse, causing construction to halt for a few days.

The original contractual completion date of the Green Street construction between Neil and First streets was Dec. 1, but was pushed to Dec. 17.

Additionally, the portion of the construction on Green Street between Mathews and Lincoln avenues was supposed to be finished by Nov. 13. However, since the contractors were only obligated to finish the infrastructure work by that deadline, more time will need to be allotted for traffic light and gas station work, Koester said.

Jeremy Phebus, a construction worker working on Green Street, said a delay like this is quite normal.

“You run into things here and there that you are not expecting,” Phebus said. “And then you just gotta make up for the difference.”

Phebus said the delay was also exacerbated by a gas line incident in front of the Illini Union.

“They were doing directional drilling and they were able to sneak past the gas line, but when they pulled the machine out it just slices the line open,” Phebus said. “They have to figure out how to shut it down and dig out everything and fix it.”

A 16-day extension has been given to the contractors working on Green Street, Koester said, and they are rushing to meet the deadline.

“Our contractor, Duce Construction, is working five 10 to 10.5-hour days and one eight-hour day per week,” Koester said.

Cade Rosche, senior in LAS, said the construction makes driving through campus difficult, but it is tolerable for him since it does not have much influence on foot traffic.

“It may be inconvenient for the campus now, but in the long run it’s going to be a good thing,” Rosche said.