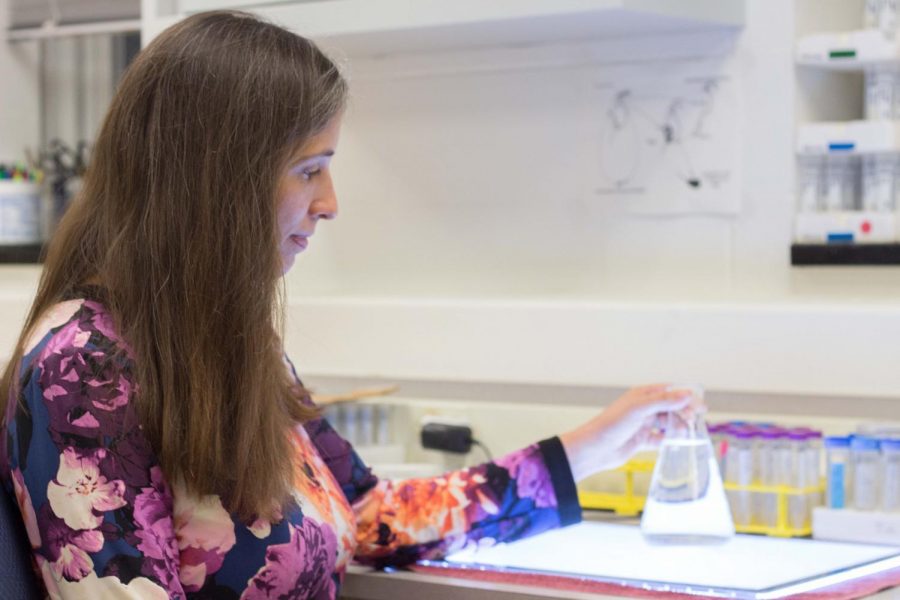 Portrait of Dr. Carla Caceres looking into a beaker filled with Daphnia, a small platonic crustacean used to study the spread of disease.

Two University faculty members, Carla Cáceres and Douglas Simpson, have been elected 2017 fellows of American Association for the Advancement of Science.

AAAS was founded in 1848, and is the world’s largest general scientific society. Fellows are chosen for their outstanding contributions in their fields by their peers.

Cáceres, professor in Integrative Biology, said she is interested in understanding how diseases move through populations and primarily focuses her work on zooplankton, a microscopic organism that live in lakes and ponds.

“They’re infected with diseases just like most everything else, mainly bacterial and fungal pathogens,” Cáceres said. “We’re interested in understanding not only how the diseases move through populations, but how community structure interacts with the role of the parasites.”

Cáceres said lakes and ponds have complex food webs just like many terrestrial systems, and we can understand responses following the alteration in one part of the system by better understanding the roles of multiple different ecological interactions.

Cáceres said she was nominated for the fellowship by a colleague at another university.

“It’s an honor that I have to share with all of the amazing students, both graduate and undergraduate,” she said. “Having this recognition come into our lab group is an honor that I hope everybody will feel that they have a part of.”

Cherish Recera, freshman in LAS, is taking an Integrative Biology James Scholar lecture section with Cáceres as one of her professors.

“My favorite part of taking a class with Dr. Cáceres is that she is enthusiastic about what she does and is knowledgeable about the topics we discuss,” Recera said in an email. “That being said, she is also the type of person who admits to not knowing something, which speaks to her characteristic of being honest.”

Recera said Cáceres is always willing to conduct quick research when needed and is dedicated to her work, her colleagues and to her students.

“She certainly deserves to be recognized in such a way, from my student standpoint, because of her astounding work ethic and interpersonal skills,” Recera said.

Cáceres said her future plans are to continue her work on disease ecology, and she is also looking at diseases that are vectored by mosquitoes.

Simpson, professor in LAS, also was nominated for the fellowship by people in the statistic field for his work in developing methods to analyze data.

“The idea is to have methods to analyze data where we don’t have to make very strong assumptions about the model for the data,” Simpson said. “Traditionally, analyses would assume something like a normal distribution for errors, and if that’s violated you still want to be able to draw appropriate conclusions.”

Simpson said the method he has worked on over the years would provide ways to make those kinds of conclusions without having to rely very heavily on model assumptions. It also has various applications to high dimensional data, analytical chemistry, risk assessment data and environmental toxicology.

“More recently, I’ve been very interested in working with scientists and engineers in medical imaging, to be able to get information out of the medical images that help with diagnosis of cancerous versus non-cancerous tissues and things like that,” Simpson said.

Simpson said it’s a great honor to be nominated by AAAS, one of the largest scientific organizations in the world.

“I really feel gratified and humbled to be recognized in this way,” he said. “I’m happy to see our field, statistics and data science, is recognized by the broader scientific community with this fellowship.”

Simpson said the AAAS is playing a lead role in supporting discovery of scientific knowledge and testing it to the scientific method, making sure the things discovered hold up to scrutiny from others, which is an important issue going forward.

The activities of an organization like AAAS are important to the society in the current political environment because people question all kinds of things that have been established by the scientific method, Simpson said.

He said a lot of questions people have come from not understanding the competitive nature of the scientific method.

“It involves people trying to disprove what each other has claimed, and things that stand up through that whole process are very rigorously established,” Simpson said. “I think that’s very important in an environment where segments of society may have not understood how we decide the things are true.”

Editor’s Note: A previous version of the article quoted Doug Simpson saying “I think that’s very important in an environment where figments of society may have not understood how we decide the things are true.” instead of “segments of society.” The Daily Illini regrets this error.