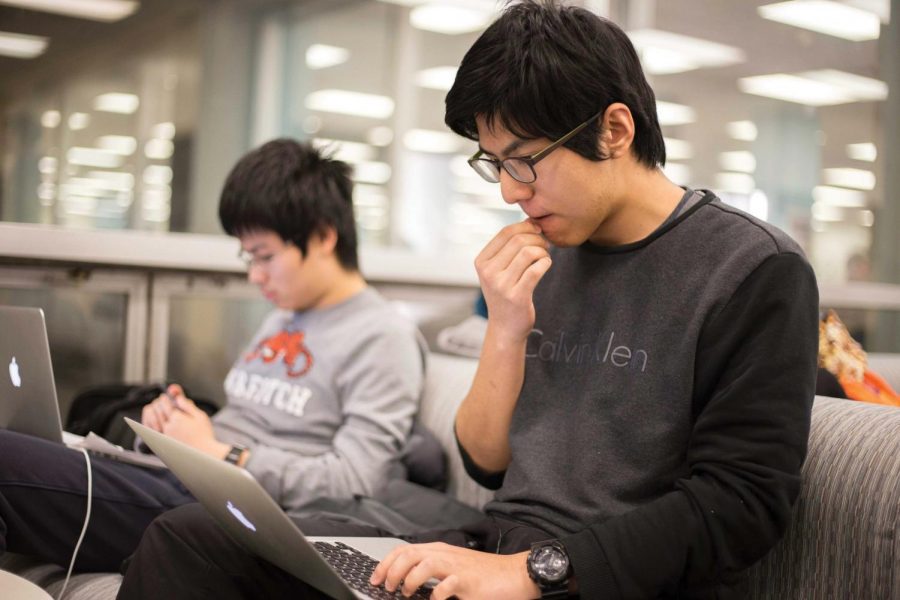 Zhining Qiu, freshman in general studies, and Chengcheng Gan, freshman in Engineering Physics, studying for finals in the Undergraduate Library on Dec. 12. Libraries across campus will be open longer the next two weeks to satisfy demand.

To help students study and meet their needs during finals week, some University libraries are extending their hours.

The Undergraduate Library’s hours will be extended to 24 hours from Dec. 10 to Dec. 20. Usually the UGL is only open 24 hours Monday to Thursday.

David Ward, interim head of the UGL, said the library has had some form of 24-hour scheduling during finals since the mid-1990s.

To help students prepare for finals, UGL is providing fun and productive activities on Dec. 14 from noon to 11:30 p.m. The event is called UGL Destress Fest, featuring therapy dogs, arts and crafts, tips from the student stress management peers, integrative health and wellness, the Writers Workshop and more available throughout the day.

Grainger Engineering Library will extend to 24 hours from Reading Day to Dec. 21.

According to the Joseph Hall-Ingram, library specialist of Grainger Engineering Library, the average number of students studying in Grainger at midnight during finals week for the previous three academic years is 582. In Fall 2016, the amount reached 608.

“We count the number of students in the building all year round according to the number of wireless connections here because it shows the usage of the building, which ties to how many graduate students we get and how much students system money we get,” Schlembach said.

Funk Agricultural, Consumer and Environmental Sciences Library will close at 3 a.m. from Dec. 13 to Dec. 20.

“The reason why we choose those hours was because those are the days that most people come. We did a survey on students years ago, and the students said they wanted extra hours. Then we decided to do it. We want to help students study in a quiet environment,” Nakea said.

The communications library is also extending its hours, so students can study from 8 a.m. to midnight from Dec. 10 to Dec. 21, excluding Friday, Dec. 15 ,and Saturday, Dec. 16.