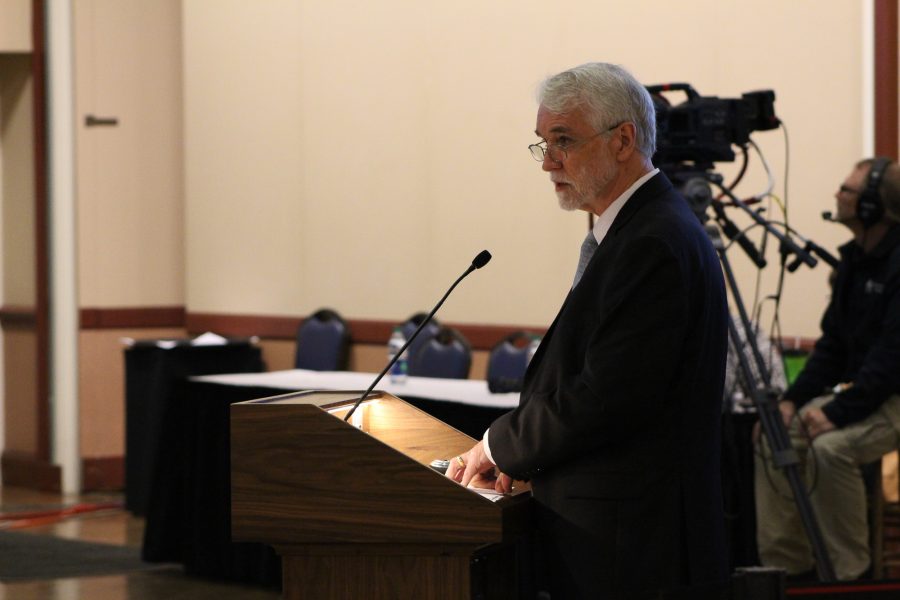 UIUC President Timothy Killeen addresses the Board of Trustees during a meeting at the Illini Union on Thursday, Sept. 8, 2016.

University President Timothy Killeen announced a University of Illinois System proposal extending a tuition freeze for in-state freshmen for the fourth straight year, which matches its longest consecutive rate freeze in over four decades, according to a press release.

The Board of Trustees’ Academic and Student Affairs and Governance, Personnel and Ethics committees will review the recommendation Jan. 17. The hold-the-line tuition would affect the universities in Chicago, Springfield and Urbana-Champaign.

Killeen attributes an increase in undergraduate enrollment to the most recent tuition freeze. Rates were last increased in fall 2014. Since then, system-wide enrollment rose by 6.6 percent to a record 83,711. This includes 2,213 more resident undergraduates, which rose by 5.2 percent across all three universities from fall 2014 to fall 2017.

“This proposal will help keep doors of opportunity open for Illinois students and hold down costs to keep them here at home to study and to use their talents to move our state forward after they graduate,” Killeen said in a prepared statement.

Under the state’s guaranteed tuition law passed in 2004, tuition rates for incoming resident students would remain unchanged for four years.

Along with the tuition freeze, mandatory fee increases of less than 1 percent have also been proposed for next year within the University of Illinois System.

Base tuition for the Urbana-Champaign campus would continue to hold steady since the 2014-2015 academic year, at $12,036. The Chicago campus would remain at $10,584 and Springfield at $9,405. No change is expected in tuition differentials across the University of Illinois System, which covers the additional costs of education in selected areas of study.

In Springfield, rates for non-resident freshmen would not change. In Chicago, an increase in base tuition of 1.5 percent for most out-of-state freshmen is expected, while out-of-state students who qualify under a high-achievement program can expect a 1.4 percent increase in tuition. International rates would increase to 1.6 percent.

Tuition rates for some graduate and professional programs would increase in Urbana-Champaign and Chicago, but not Springfield.

The University of Illinois System also proposed limiting future increases through a bill pending in the Illinois legislature.

According to a press release, the proposed U of I Investment, Performance, and Accountability Commitment “would provide predictable state funding for university operations over the next five years in exchange for tangible performance goals that support Illinois students and serve the needs of the state.”

In their Jan. 17 meetings, the committees will also review possible increases in mandatory student fees and room-and-board rates for the 2018-2019 academic year.

This increase reflects the first full year of a student-approved fee to help finance a new student union in Springfield that takes effect with the spring 2018 semester.

Room-and-board costs would remain the same in Urbana-Champaign, where the standard double-occupancy room and meal plan is $10,612 per year. These costs are similarly frozen for students for up to four years if students continue to live in campus residence halls.