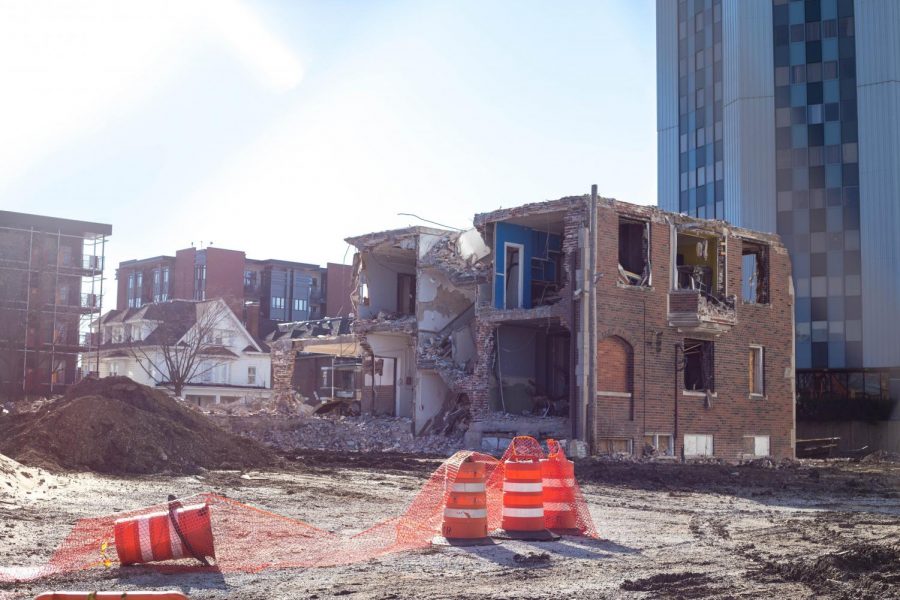 The Alpha Delta Phi is demolished to make room for new developments. The northern half of the lot was sold to Opus Development, which plans to construct an apartment complex in the empty space. The southern half will be used to build a new fraternity house for the chapter.

A 14-story apartment tower is planned to occupy the lot space of the former Alpha Delta Phi fraternity house.

The unoccupied house on 310 E. John St. was demolished by real estate business Opus Development on Jan. 8. The lot will be divided in two separate lots, with Alpha Delta Phi selling the north half to Opus for $7.52 million. The south half facing John Street will be used for a new three-story fraternity house for the chapter.

The rezoning of the lot was approved in November 2016, according to a permit with the City of Champaign. The $31.48 million apartment complex is planned to have 11 floors of residential space and three levels of parking, though its final permit is still under review.

Rezoning documents show the new apartment complex is intended to be shorter than neighboring 309 E. Green St. and HERE apartments.

“There is a community benefit to providing for a ‘stepdown’ in development height by granting the zoning change as requested. This will help to soften the transition between the height of surrounding development to the maximum height allowed within the University Neighborhood,” the permit said.

There is no timeline yet for Alpha Delta Phi’s new chapter house, though construction is expected to start in 2019.

The fraternity house had been unoccupied since June 2015. Since then, various local first responders have used the building for training, such as the University of Illinois Police Department’s METRO SWAT team and the Champaign Fire Department.