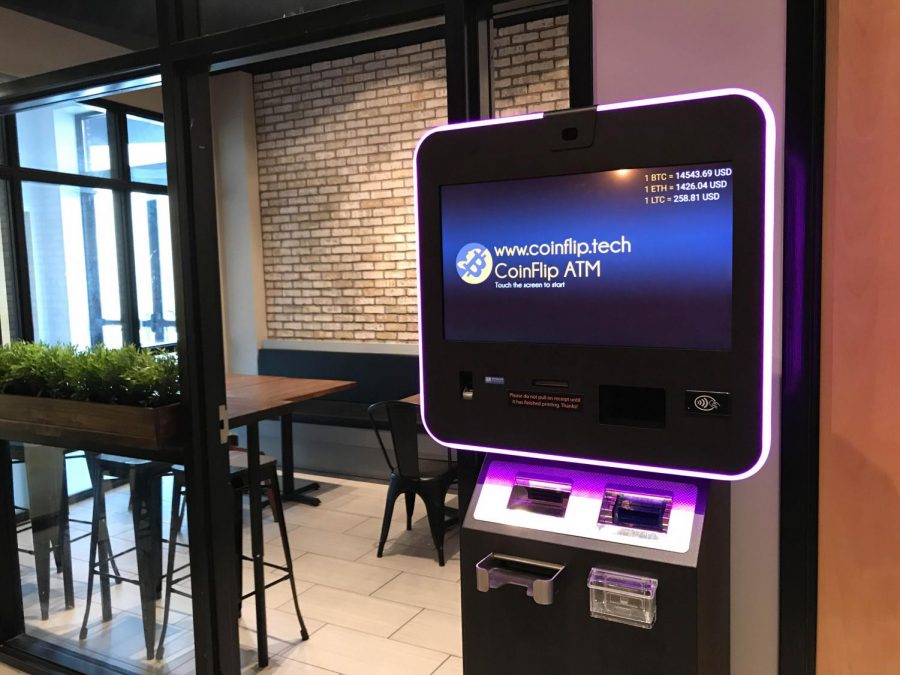 Bitcoin ATM on Green Street used to buy and sell Bitcoin and other cryptocurrencies.

Ayush Kumar, senior in Engineering, previously used Bitcoin to purchase drugs and fake IDs on the dark web. Now he, along with a swarm of other student hopefuls, are Bitcoin investors hoping to ride the wave of popularity that has increased its price by a factor of 15 since the beginning of 2017.

Bitcoin, a digital currency without the backing of a central authority or government, was released in 2008 by a creator using the pseudonym Satoshi Nakamoto. Once a popular, anonymous way to buy illicit materials on the dark web, the recent meteoric rise in popularity of Bitcoin and other cryptocurrencies has pushed it closer to the mainstream.

Niraj Pant, junior in Engineering, began mining Bitcoin on his gaming computer as a high schooler in 2013 when it was valued at only $130. Now trading at a price of $13,900 USD, Pant leaves the amount of money he’s made from Bitcoin’s rise to the imagination.

Although Bitcoin mining has grown so difficult that only large companies with access to specialized hardware and cheap electricity can turn a profit, the trend of speculation (trading in a high-risk asset that could lose all initial value due to an expectation in a substantial future outcome) may only be beginning.

“The soaring price of Bitcoin is like a honeypot that attracts so many investors,”said Xiaoyao Qian, second-year master’s student in computer science,  in an email. “A couple of years ago, bitcoin was still a niche topic that are only discussed on online forums, but now you can hear people talking about it in restaurants on Green Street.”

With opportunities to use Bitcoin to pay for goods and services limited, Qian said the volatility in price and upward climb of Bitcoin has largely been propelled by speculation.

“Bitcoin has gone through so many cyclical drops and peaks, and I think people in the bitcoin world who have been around for a while are not new to this. There’s kind of this warrior cry that they call ‘HODL,’ and it basically means hold on for dear life,” Pant said. “Hold on to your assets for as long as possible if you can afford it because these things tend to accrue in value for a long time.”

Conversation surrounding Bitcoin is often fraught with worries about a potential collapse with some likening the erratic price and frenzy of speculation to the years preceding the dot-com bubble burst.

“A lot of people compare this to public stocks in the ’90s and 2000s with internet companies,” Pant said. “Most of the internet companies lost all their value. There were a few that held their value like Paypal, Google, Ebay and Amazon, but most of them died out. I kind of anticipate that happening here as well.”

With investors and potential investors facing complex questions over whether Bitcoin is the future of technology or another bubble waiting to burst, Tom Sun, a software engineer at Twitter and a University alum, largely brushes off concerns over a Bitcoin collapse.

“My definition of a bubble is when something’s underlying value can never reach its perceived value,” Sun said. “Bitcoin might be temporarily overpriced, but I don’t think it’s a bubble.”

Sun believes that Bitcoin’s underlying value, or the size of the economy represented by Bitcoin, could achieve and go beyond the current price Bitcoin is trading at.

For those who decide to go forward and invest in Bitcoin, the process of buying it is fairly simple.

It takes less than five minutes to set up an account on Coinbase, one of the most popular bitcoin exchanges in the U.S. A Bitcoin ATM inside Taipei Cafe on Green Street can also be used to buy and sell Bitcoin and other cryptocurrencies.

Andrew Miller, assistant professor in the College of Engineering and  associate director of the Initiative for Cryptocurrencies and Contracts, was skeptical about Bitcoin at first.

“I think the Bitcoin price is a bubble and that many people are investing to get rich quick and that many who do so will lose out. But, I thought this was true at $1, at $10, at $100, etc and have been wrong every time so far,” Miller said.

In 2011, Miller recorded a YouTube video of himself unboxing a jumble of items he had bought with Bitcoin from some of its earliest adopters, including beef jerky, peanut butter, and alpaca socks — all of the packages emblazoned with the Bitcoin logo.

“I first began playing with Bitcoin in late 2010 or so. I bought a few dozen for 65 cents each, and I spent most of them shortly after. I had a lot fun buying random items online from early adopters and Christmas shopping for my family,” Miller said. “In hindsight I obviously wish I had bought more.”