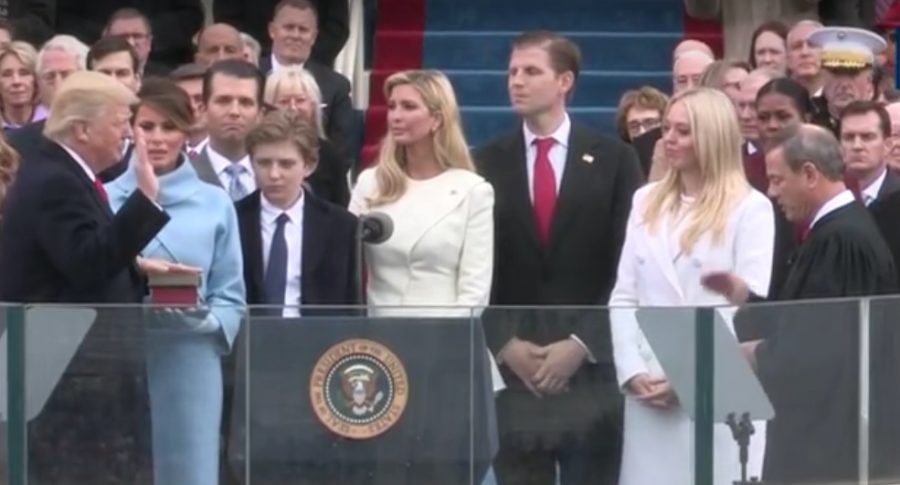 President Donald Trump being sworn into office on Jan. 20, 2017.

Junior in LAS and Business Ben Larsen was in a dining hall during President Donald Trump’s inauguration last year. Alongside him were about 200 to 300 people crammed in, fixated on the television.

“It was during exams, everyone took a break from their studies to go watch this happen. I had never seen anything like it in my life, sort of a weird feeling,” Larsen said. “There were some very mixed responses.”

“Donald Trump is an imperfect man, and an imperfect President,” said Trump voter and senior in engineering Rick Hallman. “But I think his track record has spoken for itself. The economy is doing very, very well with these past tax cuts. Generally speaking right now, the United States is very stable and prosperous and Donald Trump’s role in at least maintaining this cannot be understated.”

“Things like the travel ban, which was pretty bad and I disagree with, showed his power. Things like his appointing of Ajit Pai as FCC Chairman and that eventually leading to the striking down of net neutrality is something that contributed to a negative presidency,” he said.

“His legacy will be short term. None of his policies can be long term given the makeup of the country. His policies do not reflect the majority of our country.”

These same policies, however, have had various ranges of effects on students. Freshman in DGS Evan Detamble said the tax cut has benefited his family.

“So I suppose that is a plus for me personally,” Detamble said.

Others saw more degrees of separation in the effects of Trump’s actions.

“A lot of my friends are Muslim so the travel ban delayed their flights. I have some family friends who are Mexican so they were obviously impacted by the whole ‘Build A Wall’ schpeel that he had,” said Thilinie Bandara, junior in LAS.

“I would say his first year in office has been a huge way to show how important the POTUS is in our country and how we take that position for granted,” she said.

Both primary political student organizations on campus, the Illini Democrats and Illini Republicans, said they saw an uptick in members during Trump’s first year.

Illini Republicans President Jack Johnson said their first semester in 2017 especially saw an increased interest. He said a lot of their meetings in 2017 were used to celebrate or talk about campaign promises Trump “checked off” in his first year.

On the other side of the aisle, the Illini Democrats found their meetings and actions filled with criticism of Trump’s actions.

“From the Muslim Ban, to attempts to repeal Obamacare, to the recent GOP Tax Scam, we have had to stand up for our priorities and ensure that the last 8 years of progress, job growth and success under President Obama aren’t wiped out,” said Illini Democrats communications director Max Weiss, sophomore in LAS. “So long as Trump keeps putting out bad policies that hurt this campus and its students, we will continue to make our voices heard in whatever way we can.”

Another political organization on campus that saw an increase in interest in 2017 was the University of Illinois chapter of Turning Point USA. Hallman emphasized that while his views on Trump do not represent the overall thoughts of TPUSA, he sees the organization’s promotion of capitalism as a counter to a “left-leaning political climate on campus.”

While Johnson says that overall student political interest has probably gone down due to no major 2017 Illinois elections, Hallman and Weiss said they’ve seen it increase during Trump’s first year. Whether or not they believe that has united students is a different story.

“The political climate right now in this country is heated and unfortunately is a bit divisive. I would like to fix that but in the time being, it is a little touchy,” Hallman said.

“I certainly encourage dialogue from all sides of the political spectrum. I believe that’s the best way to create a healthy educational environment on campus is to allow everyone to have a voice, to speak freely about what they believe,” Hallman said.

Weiss said though the dialogue in the past has been divisive for a while, it is now “downright offensive.”

Trump’s campaign promise on “Building the Wall” is yet to be determined, though his first year did still see other immigration-related policies being enacted and directly impacting students on campus.

At the rally, speakers validated fellow Muslim students’ fear and anger. They also encouraged hope and reminded Muslim students that they should not need to prove their humanity or patriotism in order to be safe.

Larsen, Patnaik and Bandara all said they knew someone who was affected by the Trump administration’s immigration policies.

More rallies and protests followed after Attorney General Jeff Sessions announced the rescindment of the Deferred Action for Childhood Arrivals program, or DACA, in September. The program, which allows immigrants who were brought in as children to establish residency in the U.S. for two years at a time, immediately impacted the undocumented student population on campus.

Gioconda Guerra Pérez is the director of the La Casa Cultural Latina house on campus. She said it usually interacts with 50 to 60 DACA participants in a semester.

La Casa responded to the rescindment with informational sessions, workshops and training on how to become an ally for undocumented students. Even though DACA has been recently reinstated due to a federal judge decision, Pérez said La Casa would continue its efforts.

“We were able to reach out to 500 (people) during the fall semester. And I think that because of the changes on immigration and the fact that they were happening so quick, we had to keep providing and revisiting information often to keep everybody informed,” she said.

She added that while immigration policy changes are not new under Trump, it’s been the fast pace and aggressive stance that has kept La Casa and its students on their toes.

“I think what has been different is the tone and the way these changes have been put in place, because there are, and also how these policies are impact our students,” Pérez said.