What would happen to Urbana-Champaign during a nuclear war 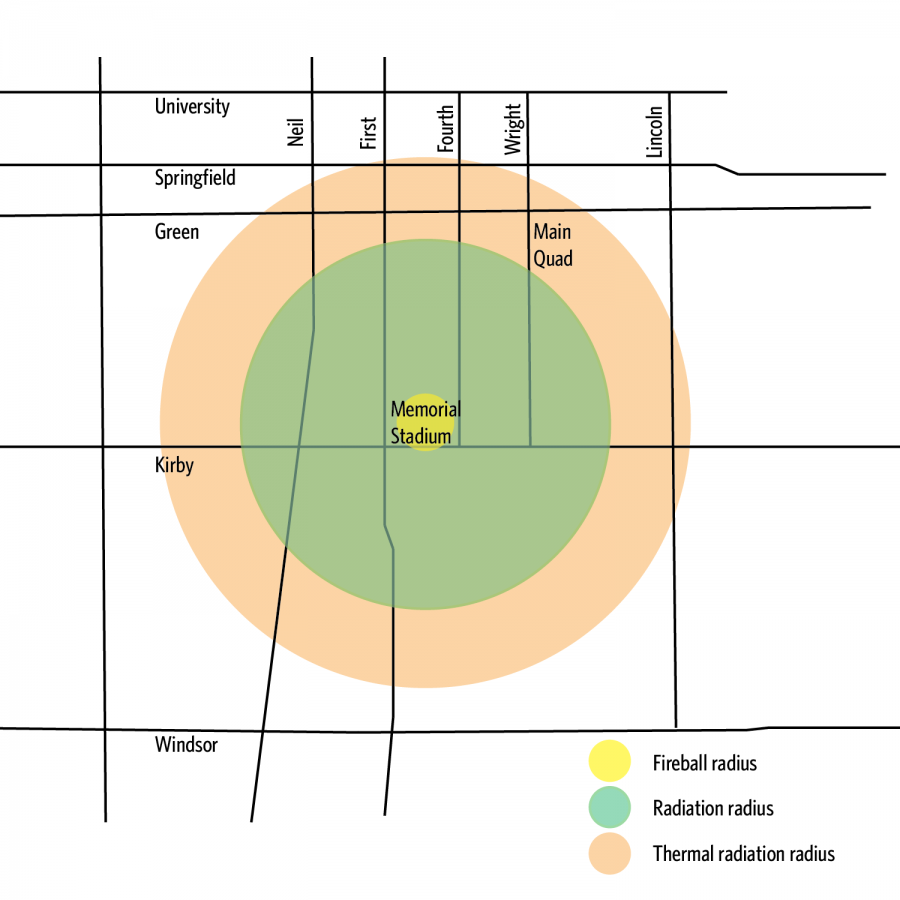 On a clear night, the brightness of a nuclear strike on Chicago would cause permanent retinal damage to anyone looking directly at it, even 150 miles away in Champaign-Urbana.

During the Cold War, the amount of nuclear weapons on both sides was so vast that metropolitan areas as small as Champaign-Urbana were thought of as potential targets for the Soviet Union.

“I don’t know if there is reason to believe that targeting option has been eliminated.” said Cliff Singer, director of the University Program in Arms Control & Domestic and International Security, in an email.

Now, nearly 30 years after the tense brinksmanship of the Cold War, Matthias Grosse Perdekamp, a core faculty member of the University program in Arms Control & Domestic and International Security, points to North Korea as the biggest nuclear threat to the United States.

Despite its emaciated economy and small size, North Korea’s nuclear program has managed to cross technological boundaries to emerge as a fully-fledged nuclear power possibly capable of launching a nuclear attack against the continental United States.

While North Korea sees its nuclear program as crucial in deterring a U.S. intervention and preserving its regime, Grosse Perdekamp believes North Korea would be unlikely to attack the U.S.; it would be  a move that would almost certainly trigger the destruction of its own state.

“I don’t think (a nuclear strike) has very much military meaning,” Grosse Perdekamp said. “As much pain and suffering as that is, the United States would easily survive and cut North Korea into pieces.”

Though North Korea may not be itching to use its nuclear weapons, amid an atmosphere of increasing brashness and volatility, Frederick Lamb, a professor researching methods of estimating yields from nuclear detonations, worries a nuclear war caused by accident constitutes a growing risk for the United States.

“There were so many occasions during the Cold War where we came within a whisker of all-out nuclear war because of mistake or misunderstanding,” Lamb said. “There’s a lot of actions being taken on both sides, but particularly on the U.S. side now, which ratchet up the tension and ratchet up the possibility of accident.”

Without the capacity to damage the United States’ military capabilities, Grosse Perdekamp believes any North Korean strike would likely be aimed at a major civilian center.

“Chicago certainly would be at risk,” Grosse Perdekamp said.

If a nuclear attack on Chicago did occur, while a mushroom cloud blossomsed over Chicago, an electromagnetic pulse would swell through the area, destroying communication satellites, crippling the power grid and shredding communication and transportation lines.

A southward breeze could carry fallout as far as Champaign-Urbana, with radioactivity rendering the area so toxic it would make the area uninhabitable and farming impossible for up to a decade, said Grosse Perdekamp.

Within days of a strike, supermarkets in Champaign-Urbana would empty of food, businesses would shut down and activity would freeze as America became enveloped by a haze of uncertainty and confusion over the possibility of imminent strikes, Lamb said.

Grosse Perdekamp predicts a nuclear strike on Chicago would have grueling economic impacts for Champaign-Urbana as well.

“The economic impact would be humongous,” Grosse Perdekamp said. “I don’t think anyone has really estimated the damage, but if a major center like Chicago is destroyed, with all of its banking, trading, manufacturing, the economic damage must be hundreds of billions of dollars.”

As Chicagoland convulsed in the aftermath of a nuclear attack, Grosse Perdekamp expects areas like Champaign-Urbana would be expected to take in a wave of refugees, many likely suffering from the effects of radiation and left devoid of financial support.

Lamb speculates that a strike could also trigger cataclysmic political changes as fear and uncertainty generated from a nuclear conflict would cause an increase in police powers, while concern for security swelled and the government’s grip tightened.

“A limited attack by terrorists or by another country cannot really destroy democracy in our country, but we can do it to ourselves by acting on fear,” Lamb said. “It took 10 years or more for people to evaluate some of the extreme measures that were taken after 9/11. If that happened after 9/11, you can imagine how much more it might happen after a large-scale attack.”

However, Lamb indicates discussion of a direct hit on Champaign-Urbana would be beside the point anyway.

“If there were an all-out war involving Russia and the U.S., some human life would survive in the southern hemisphere, but it’s likely that all human beings in the northern hemisphere would die,” he said.

But as far as North Korea targeting a missile directly at Champaign-Urbana?

“This isn’t a very likely scenario,” Grosse Perdekamp said. “I believe North Korea would be wasting its warhead.”