Altcoins, the future of money? 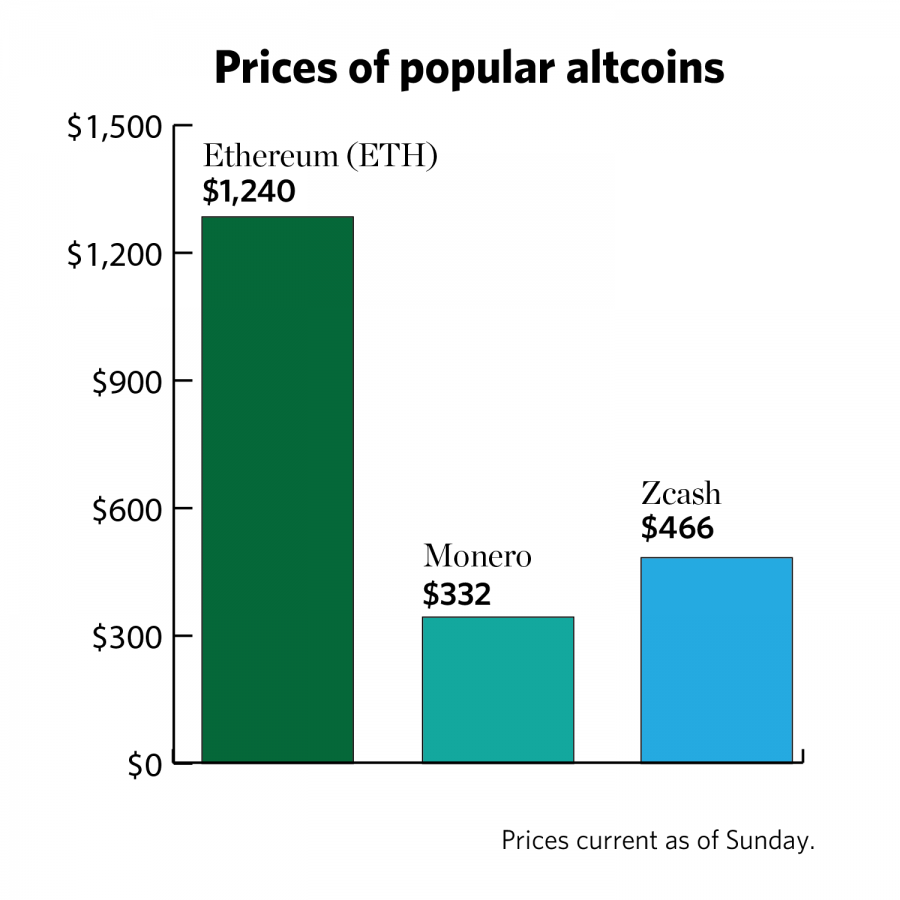 Rob Tichenor started mining cryptocurrencies in 2014 from his house in Champaign, stacking servers on top of each other until the noise and heat from hundreds of computers mining bitcoins and altcoins became too much to handle.

With his company now based in a separate mining facility in Champaign, Tichenor is part of a growing cohort of investors and miners from the Champaign-Urbana area who believe cryptocurrencies will shape the future of money.

The popularity of altcoins, which are decentralized digital currencies that aren’t bitcoins, has grown at a breakneck pace, eating away at bitcoin’s market share and providing investors with opportunities for enormous growth – or failure — that bitcoin likely won’t see, according to cryptocurrency entrepreneur Tom Sun.

With growth propelled primarily due to a flood of speculation and usage in the criminal underworld, some of the biggest altcoins like Ethereum, Ripple, Monero and Zcash could fill crucial gaps in the cryptocurrency market that bitcoin has been unable to satisfy.

Although the majority of the hundreds of altcoins existing today are likely doomed to fail, cryptocurrency advocates like Sun believe the survivors could pose a serious threat to the status quo and could disrupt millenia-old industries.

Sun, a University alumnus, former software engineer for Twitter and founder of a cryptocurrency soon to be released, believes privacy coins such as Monero and Zcash are heading into a new dawn as the criminal underworld shifts away from bitcoin and toward more anonymous coins.

“People think that bitcoin is a currency that gives you anonymity, but it really doesn’t,” he said. “If you try hard enough, you can track transactions and trace who the real person behind it is. The newer privacy coins like Monero and Zcash are truly anonymous.”

Given that the users of the dark web are often the largest adopters of cryptocurrencies, Xiaoyao Qian, a second-year master’s student in Engineering, sees a bright future for the altcoins that promise complete opaqueness.

“Bitcoin is widely used in the black market, but there’s a chance that people are slowly switching,” Qian said. “In the dark market, people want to preserve their privacy, and they don’t want security agents to know their identity. They don’t want people to track each transaction to them.”

However, cryptocurrency proponents have a much bolder vision for altcoins, beyond their use by the seedier side of the internet where cryptocurrency is often used to traffic illicit goods.

“It’s a challenge to the status quo,” Tichenor said. “There’ve been a lot of industries that have been disrupted by the internet, but the banking sector has never been challenged the way that it is now.”

Tichenor believes cryptocurrencies could extend valuable access to financial markets for millions of people who don’t have access to banks, putting financial services in reach for people with something as little as a Nokia cellphone.

According to Zhiye Fei, a University alumnus and senior software engineer at a Facebook, the adoption of bitcoin in Venezuela, where the national currency has hit an inflation rate of almost 4,000 percent, showcases the potential for cryptocurrencies free from government or central authority control.

Tichenor sees the global remittances industry as one that could be transformed by blockchain technology such as altcoin.

“Poor people are basically preyed upon because they pay such high fees to move money between countries,” Tichenor said. “This is a case where a cryptocurrency can come in and do it at a much lower cost without having to go through any centralized channels.”

Outside of the more noble uses of altcoins, the blockchain technology that underlies cryptocurrencies has birthed a range of creative games and usages.

CryptoKitties is one such blockchain game. Built on top of the technology used for Ethereum, CryptoKitties has become a popular internet phenomenon where users can breed, buy and sell one-of-a-kind cryptocats that have been sold for more than $100,000.

The flurry of optimism over the future of cryptocurrency could be stymied by issues involving scalability and privacy, problems that bitcoin struggles with and that the rising tide of altcoins seeks to resolve.

Cryptocurrency proponents like Sun see a bright future for altcoins that seek to increase transaction speed and provide its users with complete anonymity.

“I think it’s a really daring thing for me to say, but I think Monero and Zcash have the potential to take at least half of bitcoin’s market share or even more,” Sun said.