ISG calls for removal of Chief symbols in University buildings 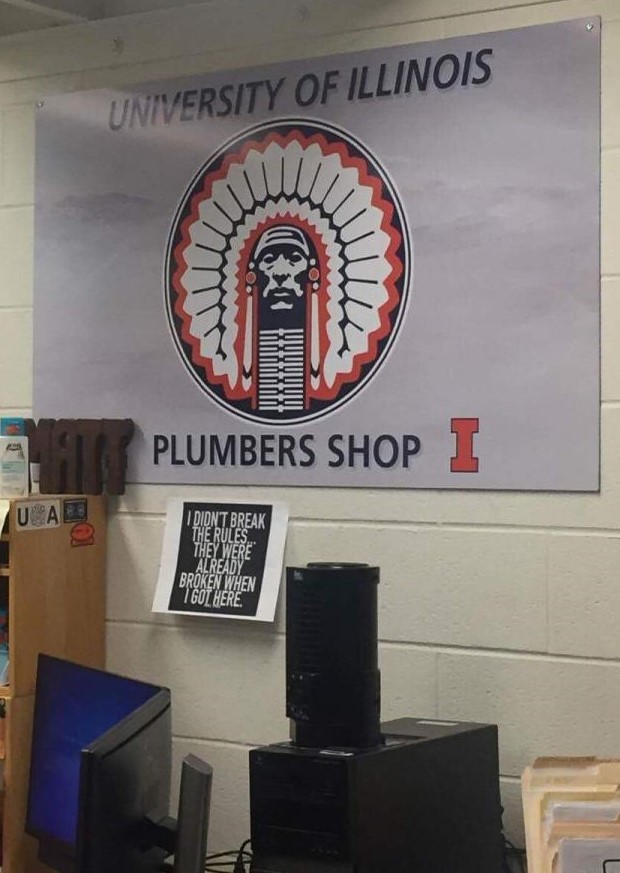 The Plumbers Shop in the University of Illinois Facilities & Services building, 1501 S. Oak St. in Champaign. The Illinois Student Government passed a resolution on Wednesday to remove Chief Illiniwek symbols from all University buildings.

Over a decade after the banning of using the likeness of Chief Illiniwek, the University continues to face resistance regarding its presence on campus.

Student Body President Raneem Shamseldin, senior in Business, is confident in saying almost every building on campus has a Chief symbol somewhere in it, whether it is in storage rooms or in private offices.

“Images of the Chief in University buildings have been constantly being sent to me throughout my term as president,” Shamseldin said. “I’ve seen some myself, and it really just doesn’t make sense that we are allowing people to keep them when they’re working for this University and in University space.”

Shamseldin said the main resistance to removing the Chief will come from issues about freedom of speech and freedom of expression.

Senator Walter Lindwall, junior in LAS, said in an email that the most opposition to this issue comes from alumni who have not been on campus in years and from students who purchase Chief Illiniwek gear out of spite.

“I support the removal of the Chief symbols from University buildings because of the negative effect it can have on native and indigenous students as well as their outright xenophobic undertones,” Lindwall said.

Lindwall said he hopes the administration will take a firm stance on the issue because many recent alumni have shown dissatisfaction at the lack of progress that is being made to find a new mascot.

“Only by finally moving away from Chief Illiniwek will we be able to change the campus culture, focus on the future and finally end the suffering and discrimination Native Americans face on this campus every day,” Lindwall said.

Senator Grace Mladenik, junior in ACES, said in an email she supports the removal of Chief symbols because it aligns with the NCAA decision made in 2007 to ban Chief Illiniwek, and because of the harm it has done, as was expressed during public comment at last week’s ISG meeting.

“The Chief is not conducive to an educational environment. It enforces stereotypes and, unfortunately, can be easily abused. While the Chief will always be a part of the University of Illinois’ history, I believe that is its rightful place to stay,” Mladenik said. “There are better avenues and mechanisms to learning about Native American history.”

Mladenik said she hopes the removal of the symbols will further the learning process around the Chief. She said it has pushed her toward learning more about the issue.

ISG passed the resolution to remove Chief symbols from University buildings at their last meeting.

ISG Senator Rahul Raju, senior in Engineering, said, “I support the broad contours of the resolution, as far as we as a body have already decided (and) voted on repeatedly, based on a lot of evidence, come to the conclusion that the Chief is damaging.”

“As the senate has previously reaffirmed, we believe that the University is ready for a new mascot,” Raju said. “So we’ll continue advocating for that, at least as an official body.”