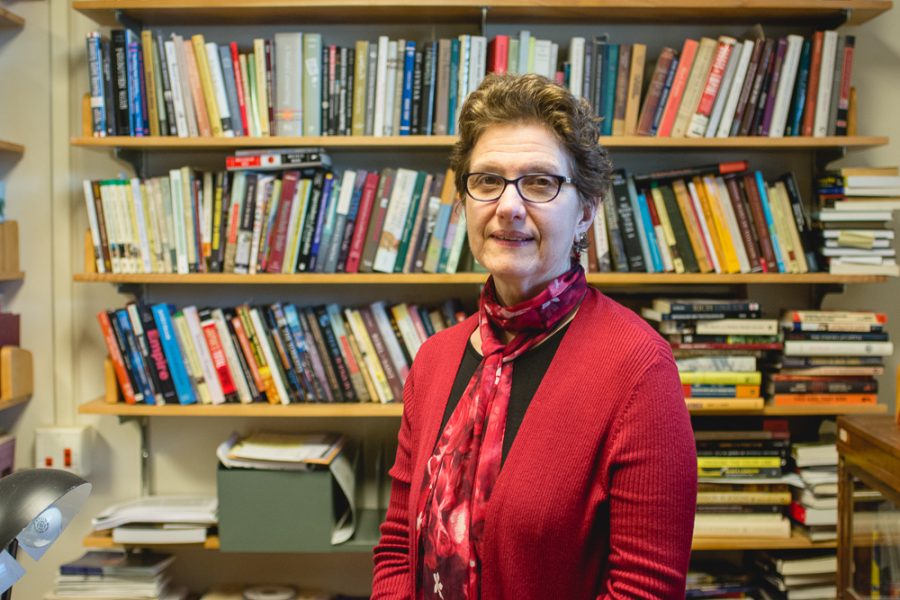 Professor Antoinette Burton is one of four faculty members at the U of I who were named endowed chairs. Burton is the director of the Illinois Program for Research in the Humanities.

In order to commemorate the achievements of distinguished faculty members, the University has nominated four scholars to be endowed chairs.

An endowed chair is the highest faculty appointment title at the University. This designation is reserved for appointments supported by a minimum endowment of $2 million, according to the Office of the Provost website.

“They have achieved a level of scholarly impact that exceeds the high standards we expect of all our faculty,” Kaler said. “These honorees have made a large and lasting impact on their disciplines, transforming what we know and understand about the world.”

Jeffrey S. Moore, professor of chemistry, material science and engineering and director of the Beckman Institute, was named to the Stanley O. Ikenberry Endowed Chair, along with Stephen Long, professor of plant biology and crop sciences.

The Stanley O. Ikenberry Endowed Chair was created in honor of Stanley Ikenberry’s tenure as the 14th president of the University, according to the Office of Provost website.

“Our campus is filled with many very excellent researchers and scholars, and to be selected, given that pool of talent that exists on the campus, is really very humbling,” Moore said.

Moore has been working at the University for 25 years and doing research on mechanical chemistry for 15 years.

He said it is a special privilege to be part of a group of faculty who are doing so well in the field of chemistry, defining where chemistry is going and changing the way people think about chemistry.

“One of the most interesting things about endowed chair and the source of money that comes with it is that it allows us to take some risks into some forward thinking,” Moore said. “This keeps us fresh, innovating and moving the boundary.”

“It’s great to have History represented in ways that are visible to the whole campus,” Burton wrote in an email.

The Swanlund Endowed Chair is made possible by a gift from the late Maybelle Leland Swanlund. Swanlund provided a $12 million endowment to attract leaders to the University, and to recognize current faculty members who have made great contributions.

Gunn has been  a voice teacher at the University for almost 12 years.

“It is a great honor to be named a Swanlund Chair, and I intend to use it for the betterment of the students, to champion the importance of the performing arts in education, and the greater good of the University of Illinois as a whole,” Gunn said.

Kaler said the chairs are campus level appointments. Most other named faculty appointments happen at the college or department levels.

“Only a handful of scholars are selected for these chairs. They are remarkable individuals who represent the highest ideals of our land-grant mission,” Kaler said.