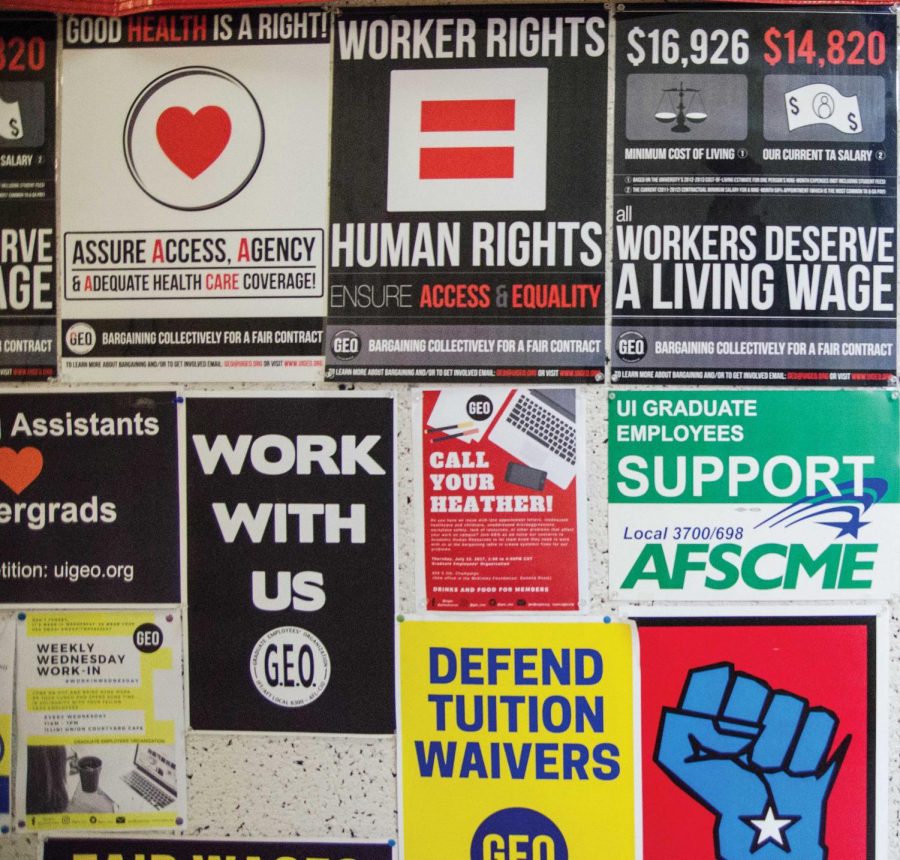 Posters cover the wall outside the Geneva Room at the McKinley Foundation during a GEO meeting on Sunday, February 4.

After nearly a year of bargaining between the University and the Graduate Employees’ Organization, the two parties remain at odds over the progress of their negotiations.

Frustrated by a lack of progress and with a strike likely on the horizon, the GEO filed intent to strike paperwork Jan. 29, giving the GEO legal permission to strike.

The intent to strike ignited support for the GEO as the Illinois Student Government, University alumni and graduate unions across the country showed support via Twitter.

Amid a wave of mounting frustration and resentment following months of rallies, teach-ins and negotiations, over 100 graduate students and supporters lined the hallways of the Fire Services Institute at a Jan. 30 bargaining session, where the administration and the GEO negotiate.

After a 12-hour bargaining session, the University and GEO managed to agree on appointment terms, leaving items like tuition waivers and wage increases on the table.

Propelled by a backlash against a Massmail sent to graduate employees by the provost, demonstrators chanted as the University and GEO bargaining teams filed into their separate rooms, until the University presumably called the police.

“The parties continue to make progress in negotiations, including considerable progress at the latest bargaining session on the issue of notices of appointment,” said Robin Kaler, University spokesperson. “The University remains hopeful that we will continue to work together at the bargaining table and that the GEO will find it unnecessary to engage in a strike or other work stoppage.”

Gus Wood, co-president of the GEO, objected to the provost’s claim that the sides had made progress.

Wood said the University and the GEO remain split on the most issues like wage increases, healthcare and tuition waivers.

“We want financial stability, we want this contract to protect our affordability of education and access to education. That’s all we want,” Wood said.

Wood believes changes to the current language would have consequences for graduate students, shaving away at the GEO’s bargaining unit and crippling students’ abilities to pay for graduate education.

Under the expired contract, a graduate student must work a certain amount of hours to qualify for a tuition waiver.

“You’re talking about a loss of the money that we generate through our research and our teaching,” Wood said.

The two sides secured a compromise on appointment letters, shortening the timeline in which they must be issued, while including a financial award for students who receive their letters late.

Currently, 95 percent of appointment letters, briefs that outline details about a student’s job and pay, are issued later than the 60 days prior to the start of the appointment as specified in the expired contract.

“Knowing you have a job is knowing you can continue in school, because your work as a graduate assistant, teaching assistant (or) research assistant comes with a tuition waiver,” said Bruce Kovanen, the GEO’s chief grievance officer. “If you don’t know if you’re going to be employed or not, you don’t know if you’re going to have to pay tuition or not and that can be really stressful.”

Wood questioned the University’s respect for the unions and workers.

Kaler maintained the University will continue to negotiate for a contract that will be fair and beneficial to both sides, saying collective bargaining “often takes a long time.”

“They stall negotiations because they want to break the back of workers in supporting unions. They want us to quit. They want us to abandon our unions and they want us to work solely for the pennies that they throw at us while they continue to generate hundreds of millions of dollars in revenue,” Wood said.

The University website detailing bargaining sessions criticizes the GEO for lack of substantive movement from initial positions, which the GEO disputes.

A possible strike of this magnitude would hit a pressure point at the University, where nearly 20 percent of classes are taught by TAs.

A Feb. 7 bargaining session will determine whether the GEO strikes.

“We’re fighting very hard to get this contract resolved before strike happens. I mean, we’re willing to bargain overnight if we have to, to get something done because none of us (want) to go on strike,” Wood said.

A previous version of the article said that “Wood said the University’s current proposals subject students who don’t hold a teaching or research assistantship to reduced waivers.” The quote was misheard and to reflect that students who do hold a teaching or research assistantship are subject to the University’s current proposals.

The Daily Illini regrets this error.