GEO to rally Wednesday morning, will strike if forced by administration 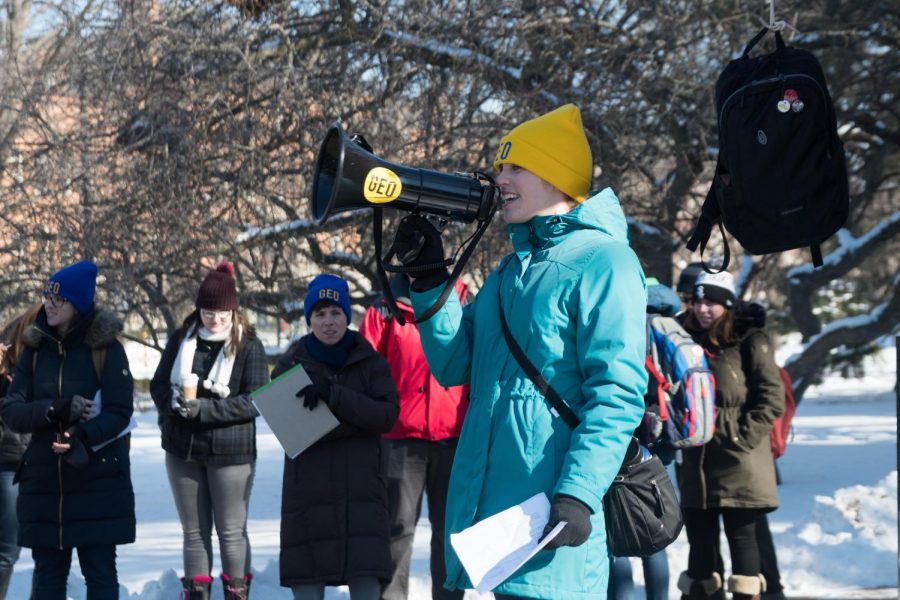 Graduate employees protest at the Alma Mater for a fair contract on Thursday, Jan 18.

Now without a contract for 170 days, the Graduate Employee Organization and supporters plan to hold a rally for a new contract Wednesday morning at 8:15 a.m at the Illinois Fire Service Institute in Champaign.

To avoid going on strike, the GEO hopes to negotiate a fair contract with University administration.

Gus Wood, co-president of GEO and Ph.D student in LAS, wrote in an email the GEO does not want to go on strike, but it is prepared to do so to both secure financial stability and protect the quality of education at the University.

“The goal (of the rally) is to show administration that GEO is united and strong in our demand for a fair contract,” Wood wrote. “We do not want to strike, but if (the administration) forces us to, then we will have to do so. We are here to bargain.”

Wood said that the University’s bargaining team has continuously stalled or offered unfair proposals. The GEO has been negotiating with the University since last March.

Wood argued that the GEO’s efforts with the University, through its members’ positions, allows the University to be as productive as it is.

“For (the University) to continue that way, graduate workers must secure financial stability in our union contract,” Wood said.

GEO has received support from community organizations such as CU Indivisible and Build Programs, Not Jails.

CU Indivisible said in a statement that the impact of a poor GEO contract would be felt across campus, and that it plans to offer whatever support it can before, during and after the strike.

“The University wants the latitude to reduce or eliminate tuition waivers, which would make graduate school inaccessible for many people,” the statement said. “This would hamstring the ability of the University to recruit high-quality graduate employees. It would chip away at the educational quality of both graduate and undergraduate education.”