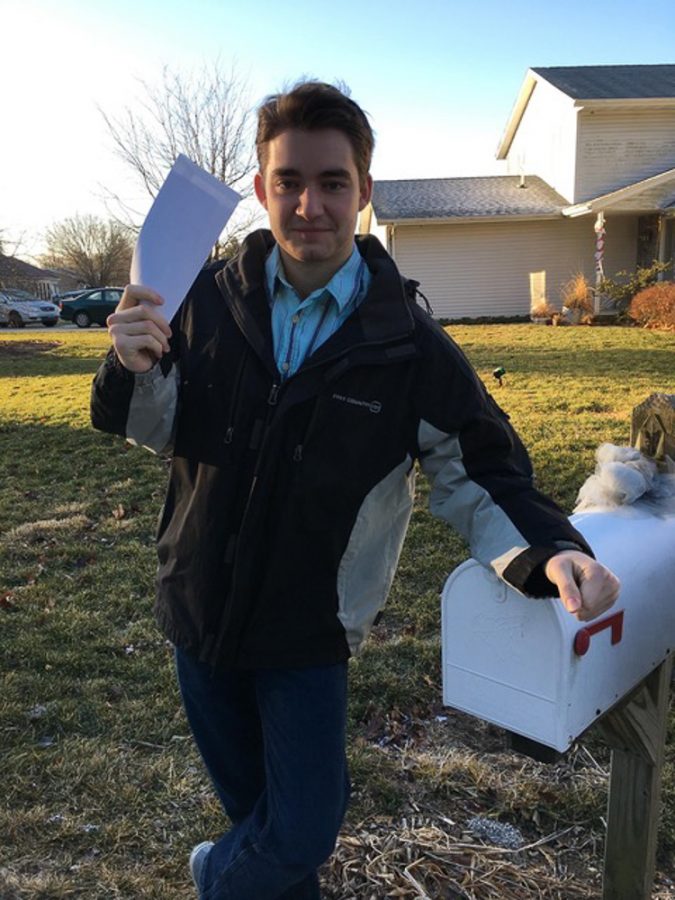 Junior in food science and human nutrition Ben Chapman holding his declaration of intent to run as a write-in candidate against Sen. Chapin Rose, R-Mahomet, for his 51st Illinois Senate District seat.

Ben Chapman, junior in ACES, is turning 21 years old on Feb. 17. This bodes well for him because the minimum age to be an Illinois state senator is 21.

Chapman is currently campaigning for the 51st District state senate seat in November, though he still has to make sure he can secure 1,000 supporters to write him in during the March Democratic primary. Champaign County Clerk Gordy Hulten said Democratic parties for the 51st District counties could still slate him as their candidate if that fails and then Chapman would need to get a 1,000 signatures before June.

If achieved, Chapman would be the only Democratic opposition to the current 51st District senator, Republican Chapin Rose, who has run unopposed in four of his past five elections.

“This is partly about making sure every person is opposed. It’s partly about providing options,” Chapman said. “But it’s also partly about the fact that I have ideas and I think that they’re worth hearing and worth talking about.”

Chapman is a Mahomet native, hoping that being a young, new face with ideas on the opioid crisis and electoral reform will help him convince the 51st District voters to send him to Springfield.

While Chapman made his formal campaign announcement for state senator in mid-January, Sukovic, a Republican, has been working on his campaign for state representative in his home district, the 59th District, since November of last year.

He is looking to get past the March primaries and face Democrat Carol Sente, who has won her past four elections.

Sukovic has already secured his signatures to get his name on the ballot, achieving the petition signatures during a 90-day window last fall to file for the state board of elections. It took him two weeks to get over a 1,000 signatures.

“I was able to do that because I built a robust network of peers, of friends, that lived in the community to help me get that goal. Certainly, over the course of that last semester, time management was essential and we got it done,” Sukovic said.

Both Sukovic and Chapman have experience with campus political groups, with Chapman being a co-chairman of the Political Action Committee of the Students for Environmental Concerns. Sukovic was one of the initial members of pro-capitalism group Turning Point USA, before leaving in 2015 to work for U.S. Rep. Bob Dold.

For Sukovic, the network he built while working for Dold has helped him see how actions done in Springfield directly affects communities miles away.

“It was kind of just every day, I was going into the job (and) trying to find ways that government could make it easier for people to pursue opportunities, not making it more difficult,” he said.

For Chapman, working on the U.S. congressional campaign for John Ebel, a University professor, has provided him mentors to give him the skills and experience necessary to run a political campaign.

Chapman said it really hit him how real this campaign was when he saw his face and news about the campaign on the front page of Reddit.

“That made it much more serious and it made me realize much more that I’m now, sort of, a symbol for young people standing up and taking control of the future of our government and of the state and of America,” Chapman said.

Representing the voice of the young in government is something Sukovic saw first-hand through campaigning with his friend, Jake Leahy, freshman in ACES, who is on the Bannockburn School Board and is the youngest elected Illinois official at 18 years old.

“I think on the whole, most people are excited when they see a young person knock on the door, because they know how bad things have been in the state. When they see someone that’s working hard, a go-getter, I think they get encouraged a little bit,” Sukovic said.

“The friendships I have with people at this school, who are making the decision to leave the state, they’re not going because it’s a little cold outside, or because their sports teams are not doing so good; they’re leaving because of the economic climate,” he said.

For Chapman, he wants to tackle an electoral system that he believes has made his potential constituents in the 51st District voiceless.

“People in southern Illinois, they feel that their votes in the electoral college system mean nothing. And that’s true. The fact is, the way Chicago votes kind of determines the way the state goes and that’s not okay,” he said. “As a representative of a district, it should be my job to ensure that people of my district’s voices are heard loudly.”

Still, both Chapman and Sukovic have the hectic battle between campaigning and school work.

Chapman said luckily, his family and support team can take over for the campaign when midterms pop up. For Sukovic, he graduates in a few months and with last fall’s semester being his hardest yet, he feels he has already proven to himself that the balance between his campaign and the classroom can be achieved, though he said his professors have been pretty casual about it all.

“I don’t think they understand exactly what I’m doing. Like I tell them, ‘Hey, heads up, I’m running for office if I have to turn the assignment in a little bit late.’ And they’re like, ‘Oh, okay,’” Sukovic said. “And I’m like, ‘That’s all?’”