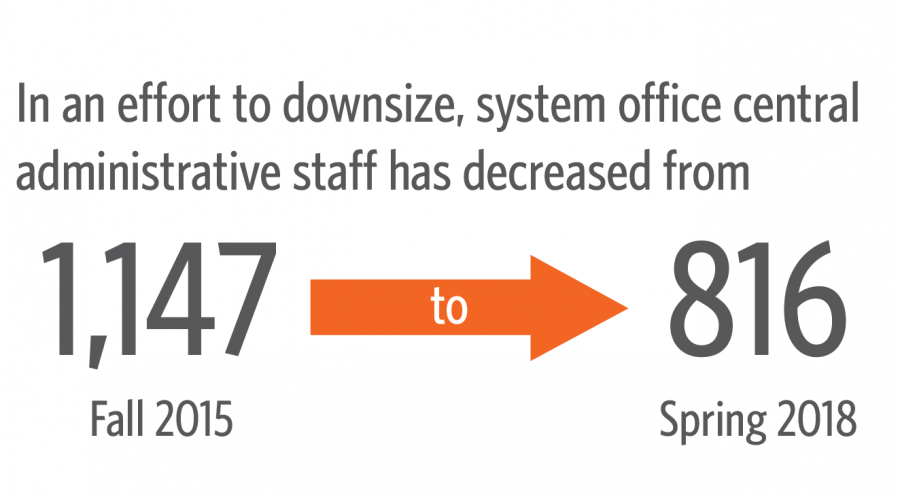 The University’s three-campus system is in its final stages of administrative realignment, shifting 115 full-time jobs and $8.4 million to improve administrative services efficiency.

The realignment initiative was launched by University President Tim Killeen in 2016 to ensure the University system is running as efficiently and effectively as possible.

“Our objective is an alignment of administrative functions so that we may collaboratively achieve the strategic goals of each university and the system as a whole,” Killeen said in a written statement. “The result will be improved efficiency and effectiveness of these essential administrative services.”

The size of the systems’ office’s central administrative staff has shrunk by 29 percent, Thomas Hardy, executive director of university relations, said in an email.

The central administrative staff had 1,147 employees in fall 2015, but as of January of this year, the staff only has 816 employees.

“Some of the reduction in U of I System central administration is a result of the realignment and transferring of some staff to the campuses for strategic efficiency and effectiveness outcomes, but most of the staff reduction has been a result of natural attrition and stringent hiring,” Hardy said.

A realignment task force made up of administrators and faculty from each of the three universities recommends the transfer of certain administrative services to be reviewed by Killeen and the three chancellors, Hardy said.

“The team set out to eliminate duplication of work, improve service by moving it closer to the users on campuses, manage performance by linking it to users’ satisfaction and enhance collaboration and trust between university and system operations,” Hardy said.

The administrative realignment will be completed this spring after some additional services are transferred.

“Last summer, some services and personnel related to purchasing, budgeting, administration of grants and contracts and online learning were transferred from the system office’s central administration to the three universities. And this spring, the realignment process will wrap up,” Hardy said.

Hardy said the realignment should allow University campus units to function with greater efficiency and effectiveness by aligning administrative processes including information technology, purchasing and administration of research grants.

“The realignment will move all grant and contract functions to the universities, which had prepared and submitted applications for funding while system offices supervised compliance and administration once awards were made,” Hardy said.

The shift will move services closer to the faculty who receive awards and create synergies that will streamline and improve their projects, according to Hardy.

Melissa Edwards, director of research communications at the Office of the Vice Chancellor for Research, said in an email that one of the outcomes of the system’s realignment effort has been the reunification of the pre- and post-award functions that support researchers.

“The combined offices are known as ‘Sponsored Programs Administration,’ and they serve the Illinois research community throughout the entire life cycle of an externally sponsored project, from proposal submission to award close-out,” she said.