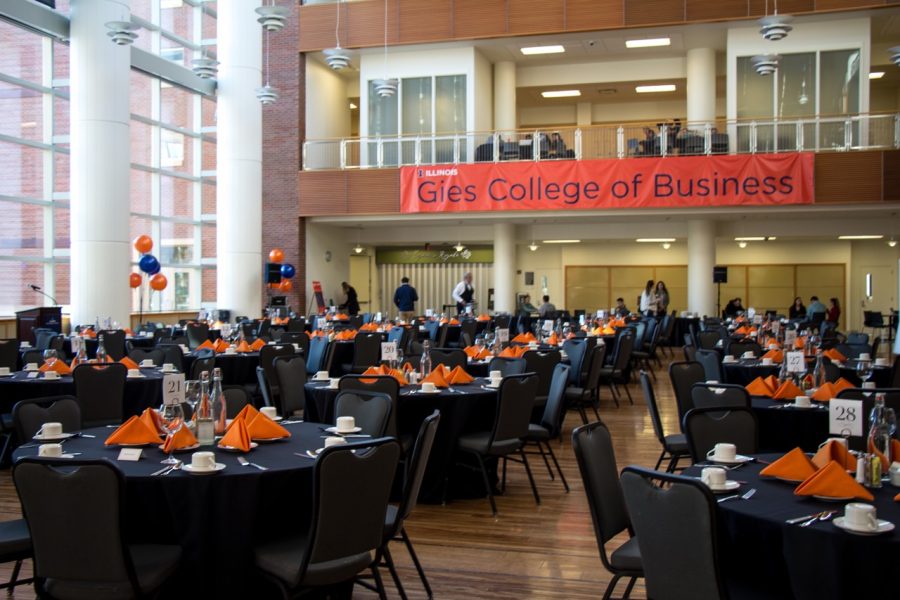 Gies College of Business students celebrate the generous donation from the Gies Family at the Business Instructional Facility on Oct. 26, 2017.

University alumni Larry and Beth Gies are ranked 14 among America’s top 50 philanthropic donors in 2017 by The Chronicle of Philanthropy.

The Gieses’ donation to the University is one of the largest gifts to any business school in U.S. history, according to Jeffery Brown, dean of Gies College of Business.

Collectively, the philanthropists making up The Chronicle’s top 50 list gave away $14.7 billion, the largest total since 2008, as reported by The Chronicle of Philanthropy.

This year, colleges and universities received 48 percent of the billions given by the Philanthropy 50.

Larry Gies said in his donation announcement he has always been passionate about giving back to the university that he feels has given him so much.

“What I do for the world and those I touch along the way is how I will leave my mark, and there’s no better place to do that than the University of Illinois,” he said.

The list, which was compiled by Maria Di Mento, only counts gifts that donors make to organizations with charity or foundation status.

The list fails to include some of the nation’s top donors.

“Some of America’s biggest donors don’t appear on the current Philanthropy 50 even though they wrote big checks to charity last year,” Di Mento said in an article. “That’s because the Chronicle’s rankings count multi-year pledges only once, as a lump sum in the year the commitment was made.”

Another reason some philanthropists did not make the list is because their gifts were not publicly disclosed.

Joseph Oswald, freshman in Business, had the opportunity to hear Larry Gies speak at a Business 101 lecture just a few days after the donation announcement.

“(Gies’s) appreciation for the college really showed through and his desire to want to help the college improve and be the best it could be was apparent,” he said.

Oswald said the recognition the college received thanks to the Gieses was exciting, and that he was impressed by Larry Gies’s passion and relatability.

“The administration was very excited. It was a cool feeling to be a part of it all and it was a good step forward for the college,” he said.