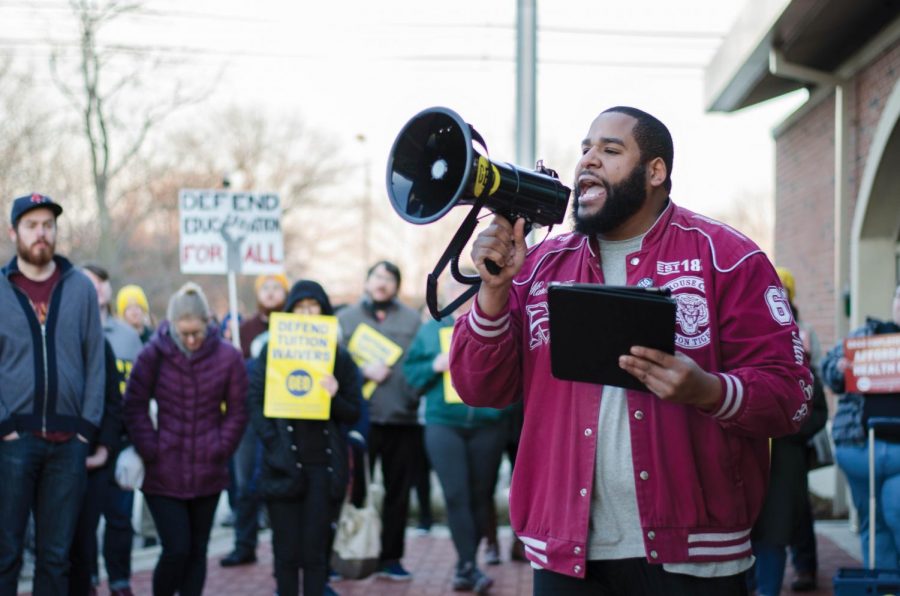 Co-President of the GEO Gus Wood speaks in front of Illinois grad students during the GEO rally on Sunday.

The Graduate Employees Organization is moving forward with its strike Monday morning after last minute talks between members and the University fell through Sunday afternoon. The GEO made its announcement in front of the Fire Service Institute after negotiations ended at 5 p.m. Sunday.

The strikes will begin at 8 a.m. Monday on the Main Quad and will go until 5 p.m. each day until a contract is reached, according to GEO rally coordinator Jennifer Jones.

Campus spokeswoman Robin Kaler said the University team was the last to give a written counterproposal and didn’t leave the building until about 6:30 p.m.

GEO co-president Augustus Wood said the negotiations began at noon Sunday and ended at 4:52 p.m. after University negotiators said they had nothing else to give them that day and that they “were not interested in bargaining today.”

In an emailed statement from Andreas Cangellaris, vice chancellor for academic affairs and provost, the University is “extremely disappointed” in the GEO’s decision to “end Sunday’s negotiations and ask its members to participate in a strike.”

“We’ve listened to the concerns of the GEO. We’ve made generous and serious proposals that address those concerns,” Cangellaris said in the statement.

One of the concerns the GEO voiced Sunday was securing tuition waivers for current and future graduate students. According to Cangellaris’ statement, the University had a proposal that “explicitly guarantees tuition waivers for bargaining unit members.”

“The University is trying to drive a wedge between us and future students, saying that our tuition waivers won’t be touched, but in the future that that might be different,” Kozak said. “And we’re saying we’re not going to sell out our future just to get a contract now.”

Other concerns the University said it has been compromising on with the GEO include raising minimum wage and providing further health insurance coverage.

Wood is hoping the strike will send a message to the University to bring negotiators “back to the table.”

“The University will be shut down until the bargaining team recognizes that education runs this University, and not money,” Wood said. “We’re going to be on the picket lines every day until we settle this contract.”

Cangellaris’ statement said the University is taking the necessary steps to minimize any disruption of instruction, and the University is ready the bargaining process to reach an agreement that will end the strike “as quickly as possible.”

“We have made significant progress toward a final agreement and our goals are not separate or different here,” the statement read. “We want to ensure Illinois’ sustainable excellence in graduate education and research by remaining competitive in attracting the most talented, hard-working and brightest graduate students in the world.”