An overview of the GEO strike 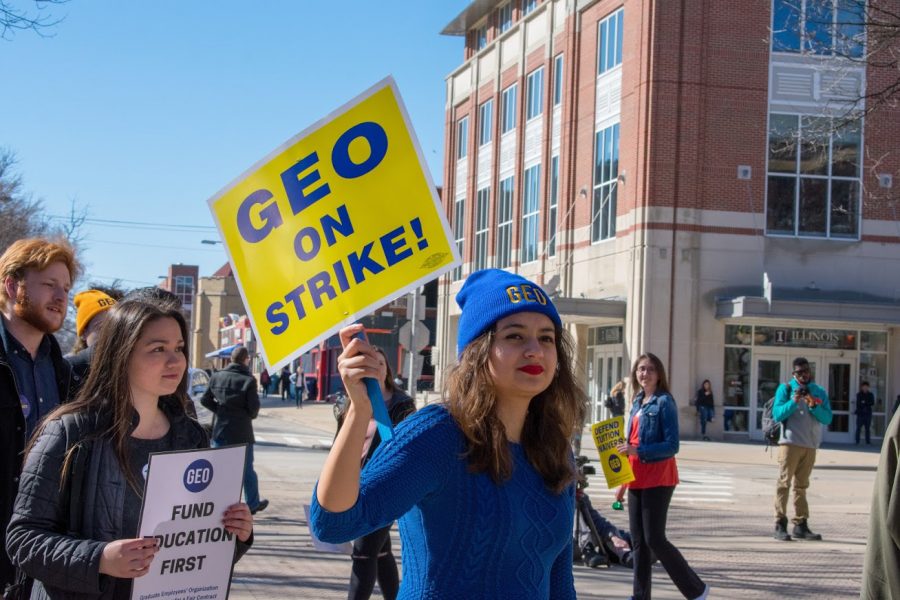 After eleven hours of contract negotiations with the University administration failed, the Graduate Employee Organization began to strike for tuition waivers, health care and wage increases at 8 a.m. Monday morning.

On Sunday, Feb. 25, Andreas Cangellaris, vice chancellor for academic affairs and provost, released a statement saying the University has “made generous and serious proposals that address (The GEO’s) concerns.”

“We are ready to resume the bargaining process and we hope we will reach an agreement that ends the strike as quickly as possible,” Cangellaris said.

Cangellaris said the University and GEO have made significant progress toward a final agreement.

“We want to ensure Illinois’ sustainable excellence in graduate education and research by remaining competitive in attracting the most talented, hard-working and brightest graduate students in the world,” Cangellaris said.

Around noon, strikers gathered in front of Foellinger Auditorium and led a rally, where guest speaker State Representative Carol Ammons supported their fight for fair contracts.

Rallies were held outside the Swanlund Administration Building and Foellinger Auditorium, while members continued to picket University buildings.

The release stated that over 2,000 undergraduate students in the College of Engineering were not in class because the teaching assistants who led the classes were striking.

Gus Wood, co-president of the GEO, said the length of the strike is indefinite as they will strike until the University and the GEO reach a fair contract.

Close to 1,000 people rallied in front of Foellinger Auditorium, and then proceeded to the Beckman Institute for a follow-up rally later in the day.

Protesters also made their way to the North Quad and to the I-Hotel and Conference Center, where they disrupted the Agriculture Technology Innovation Summit.

The GEO proposed its demands in a statement Thursday morning.

They continued to picket buildings on the main quad and held another rally in conjunction.

In a prepared statement to The Daily Illini, University spokeswoman Robin Kaler said: “According to the mediator, the GEO has not expressed a willingness to return to the bargaining table. Since the GEO announced its intention to strike, the GEO has made no attempt to contact the University to resume negotiations.”

After remaining publically silent about the GEO’s strike for the duration of the week, the University addressed the strike in a Massmail Friday afternoon.

In the Massmail, Cangellaris said that the University’s top priority is protecting students’ academic experience.

“We will continue the bargaining process, and we hope we will reach an agreement that ends the strike as quickly as possible,” Cangellaris said. “We are taking the necessary steps to minimize the disruption of instruction, to ensure your course objectives are met and to ensure timely grading.”