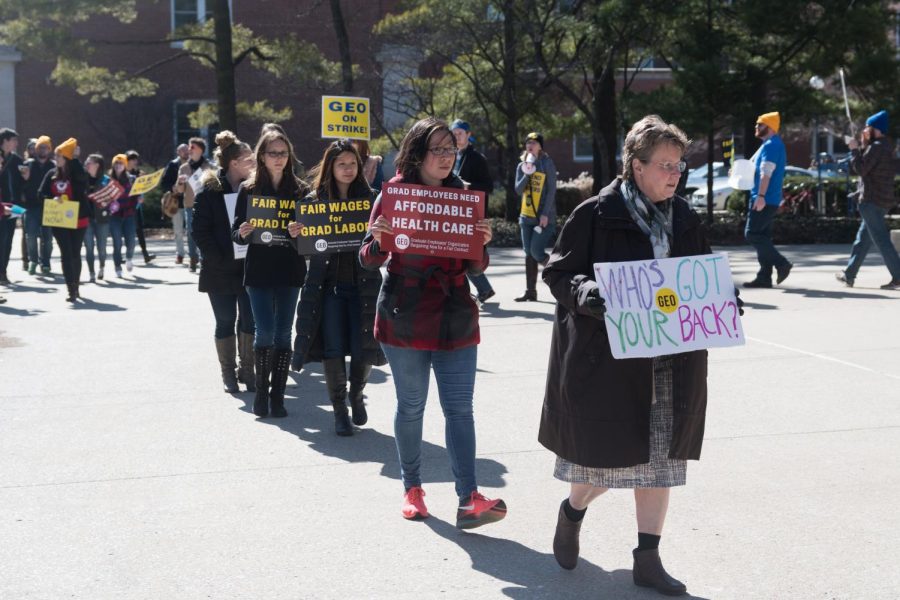 The GEO strike moves into its second week of protests and rallies after negotiations Sunday with University administration failed to reach an agreement.

“They had the first bargaining session since the strike began on Sunday, and the administration came to the table with the exact same provisions that they had before the strike began, showing that they didn’t think the strike would last any longer,” Matej Penciak, sixth-year Ph.D. student in Mathematics, said.

Adam Kozak, fifth-year Ph.D. student in the classics department, said it’s frustrating that no progress was made with the negotiations, but the GEO is going to be on the picket line for as long as it takes to get the contract GEO members need to stay at this University.

David Lehman, graduate student in History, said negotiations are at an impasse and not back-and-forth because the administration is looking to dictate what the graduate student’s situation will be instead of working with them.

“We’re out here because…at least our part of education is not being supported financially,” Lehman said. “We got all the money in the world for building projects or for trying to add a new medical school but not to make sure there are good teachers for you.”

The next bargaining session between the two groups is Wednesday.

As for the cancellation of classes, Lehman said the intent of the strike is to make people more aware of the situation of a graduate employee but not to harm the undergraduates’ education.

Penciak said he thinks undergrads should be raising questions about compensation during the strike. He said they should be asking the administration why undergraduates are paying tuition and TAs are not getting the compensation for the work they do.

“The tuition is going to these crazy projects that they have but not going to the places that really will affect their learning,” Penciak said.

Lehman said students are not getting any practical side of learning if there is not a teacher. He said he hopes his students will be ready to get back into classes once the strike has ended.

Penciak hopes the undergrads are becoming more aware of the struggles that graduate students face and start to appreciate all the work they do.

“It’s clear that we’re growing everyday, you know, rain or shine, we’ll be out here, and we are going to show the administration that they can’t push us around,” Kozak said.