Altgeld chimes ring in the spring 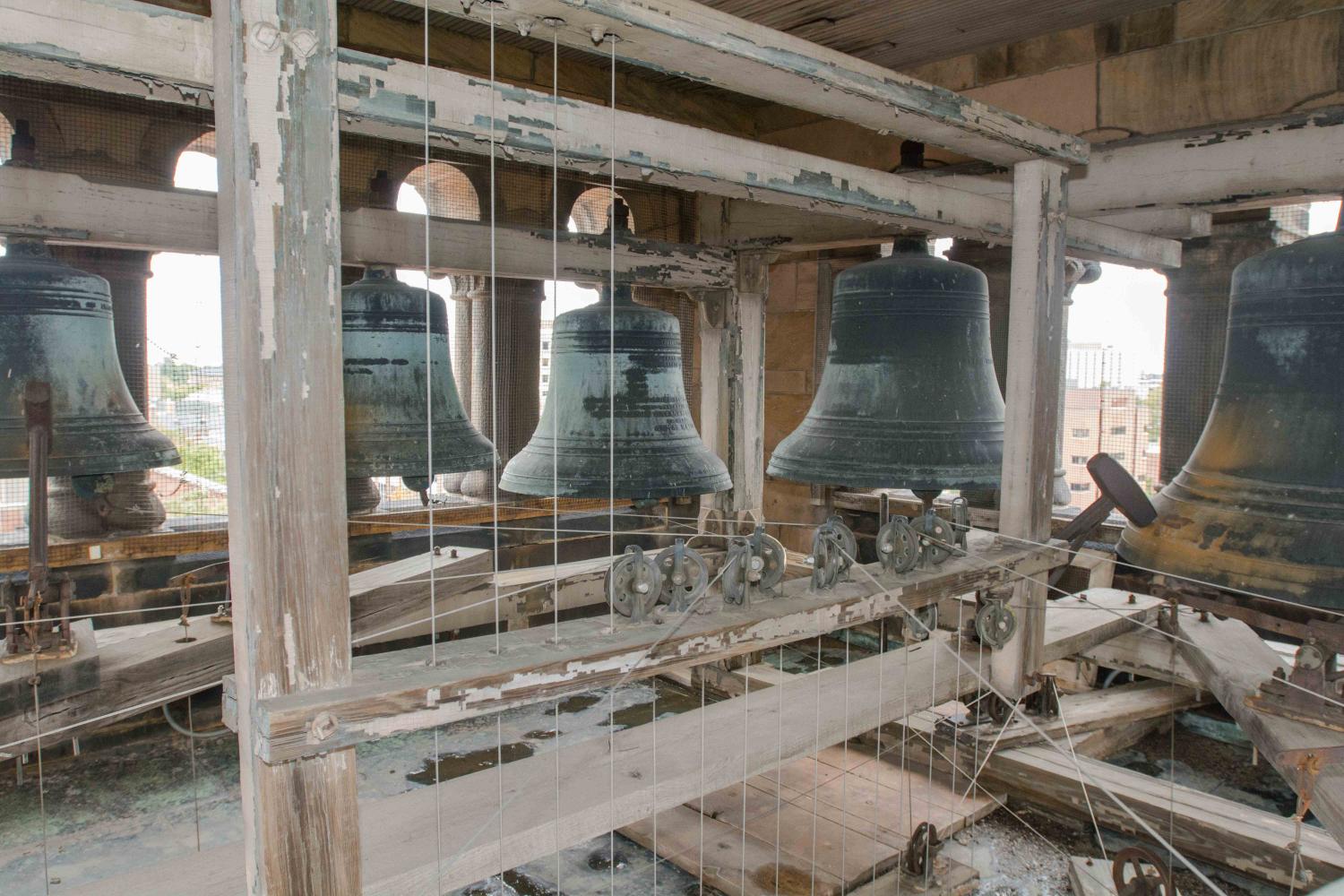 A view of the chime in the Altgeld Hall Tower. The chime was installed in the tower in 1920 as a gift from the classes of 1914 through 1921 and the U.S. School of Military Aeronautics.

After a year-long hiatus of repairs and automated music, the Altgeld Tower chimes are opening again this spring to continue the tradition of live student performances.

The bells were shut down in March last year due to severe restorations inside Altgeld and Illini Hall, according to Jonathon Smith, graduate student in FAA and the new chimesmaster.

“All of this work was completed just a few weeks ago,” Smith said in an email. “The playing room looks completely different and has a number of new safety features like level flooring and some padding for low-hanging beams.”

Since 1920, chimesmasters and student volunteers have been playing music to the campus throughout the day.

These performances were discontinued due to renovations and were replaced by a programmed quarter-hour timekeeping function that plays music on the chimes, instead of the standard 15-minute ring.

“There is a new automatic playing system which was set by the bell company- it’s currently playing the quarter chime and Hail to the Orange,” Smith said. “As soon as we can start back to playing we’ll probably make some adjustments.”

When the chimes were up and running, students who were interested in performing the tunes could reach out to the Altgeld Ringers student organization, visit the tower and begin practicing.

After Matthew Tomaszewski, associate provost for capital planning, announced the creation of an official leadership position for the chimes in an email last summer, FAA and the School of Music appointed Smith as the chimesmaster.

Jeffrey Magee, director of the School of Music, said in an email the long hiatus of renovations was well worth the wait, even if the changes took longer than expected.

“I suspect the renovations that were needed just to get the space up to code were much more extensive than initially anticipated,” Magee said. “But, I think the Altgeld Chimes have a bright and long future ahead!”

However, Smith said the University is unsure when the Bell Tower will be officially reopened.

“The chime tower is unique for Illinois because it is sort of a sonic representation of campus,” Smith said. “It’s also special as few universities have chime towers — most have larger carillons (Chicago and Michigan included), but the smaller chime instruments were more common earlier in the 20th century and we are fortunate to still have our original instrument in playing condition.”

In an email, past chimes player Cody Jones also said the tower represents something more meaningful than just chimes. He said the long-standing heritage serves as an important landmark in the University’s history.

“The chimes serve as a traditional time-keeping service as well as to entertain passerby’s with music,” Jones said. “The chimes have been playing for around the past 70 years, so many generations of students have heard them as they hang out on the quad or as they walk to class.”