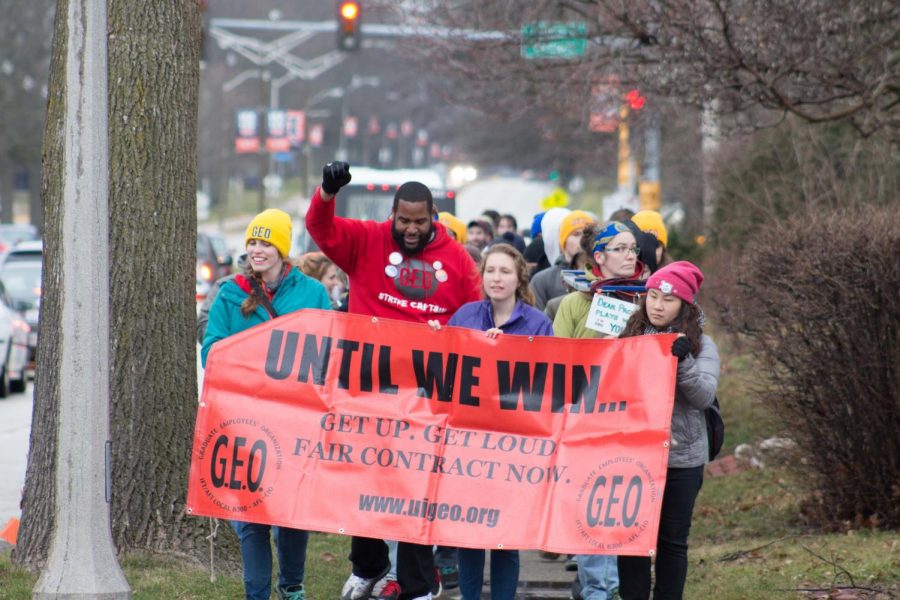 Members of the Graduate Employees’ Organization march toward University President Timothy Killeen’s house along Florida Avenue on March 6. An agreement has been made between the GEO and University administration that grants many of the GEO’s demands for a new contract.

The longest strike in University history ended Friday night after 98 percent of members of the Graduate Employees’ Organization voted in favor of the proposed contract.

The agreement has been modified from the GEO’s original proposal following negotiations with University administration.

The agreement fulfills several of the original demands and expands on some of them.

“Because of the dedication of the members in this union, we have a contract,” said GEO Co-President Gus Wood in a prepared statement. “Countless hours of organizing made this happen. We held the lines, we stayed positive and we remained hopeful that we’d get the contract we deserve.”

The GEO released its original set of demands on March 1 after going on strike Feb. 26.

GEO workers demanded a minimum of one month’s notice for employment. If the appointment letter is late, workers should receive compensation.

According to the current agreement, if appointment letters are received late, teaching assistants are entitled to file for a $50 compensation.

Wages were proposed to increase by $500 for the lowest paid members. This pay increase would still not reach the price of the cost of living in Champaign-Urbana.

Wages will increase for the first three years of the five-year contract by about 4.5 percent, 2 percent and 2 percent again in the first, second and third years, respectively.

The GEO also asked for a reduction of mystery fees, such as payment that goes toward infrastructure. However, members have pledged to continue paying fees which contribute to the community such as the public transportation system.

Prescription coverage, reproductive health care, coverage of pre-existing conditions, mental health care and health care for all genders were among the list of demands under guaranteed access to health care. The GEO also asked for help to pay for summer health care premiums.

Resources for dependents were included as part of the original proposal, asking the University to assist in paying health care premiums for dependents and to provide stipends for childcare expenses.

Insurance premium coverage will increase from 80 to 87 percent, according to the agreement, and 25 percent coverage will be provided for one dependent. Stipends for childcare are not included in the most recent proposed agreement.

Guaranteed tuition waivers for teaching and graduate assistants were included on the list of demands.

According to the proposed agreement, tuition waivers will be guaranteed to TAs and GAs once they are enrolled in a program. When in that program, they will be governed by the tuition waiver policy in effect at the time of their enrollment, so long as they are in good academic standing and make progress toward graduation.