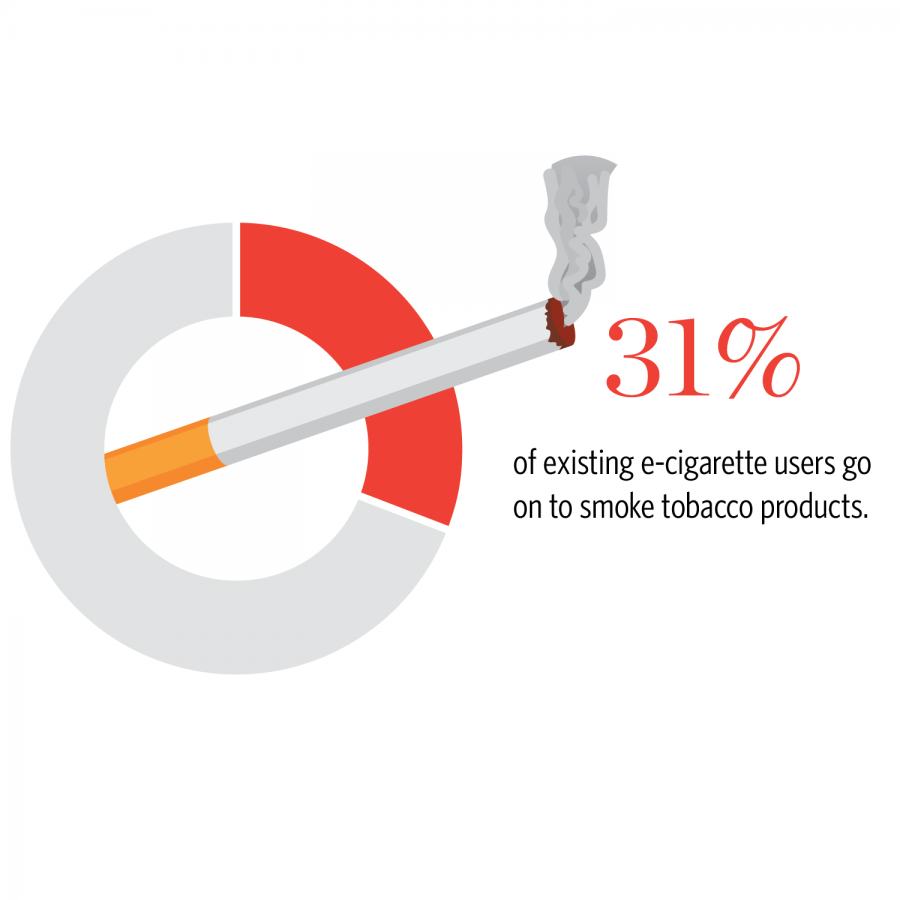 With a climbing popularity, e-cigarettes have been touted as a safer alternative to smoking, but experts have raised concerns about how harmless e-cigarettes actually are.

E-cigarettes are rechargeable electronic devices that vaporize a liquid for a hit of nicotine comparable to the feeling of smoking tobacco.

Advocates of e-cigarettes, especially e-cigarette companies, say the products are meant to be used as a safer alternative to cigarettes and traditional tobacco products used by smokers.

However, the popularity of JUUL, an e-cigarette known for its sleek design, has skyrocketed among college students, with more young people using e-cigarettes than other tobacco products.

JUUL uses pods filled with an aerosol containing nicotine, chemicals and flavorings such as mango, mint and cucumber.

According to the National Institute on Drug Abuse, 1 in 4 teens have reported smoking e-cigarettes, while about 31 percent of e-cigarette users started smoking tobacco products within six months of starting JUUL use.

Ryan Drenan, associate professor of pharmacology at Northwestern University who researches nicotine addiction, believes it is highly likely that people could become addicted to e-cigarettes.

“E-cigarettes certainly involve nicotine, so you can imagine there could be some of the same health risks that nicotine leads to,” he said.

However, he emphasized the relatively recent ascent of the e-cigarette has meant there is a scarcity of research looking into the long-term effects of e-cigarettes and its addictive properties.

“If it were me, I would not be using them, and I would be waiting for time to tell us whether these things are safe or not,” Drenan said.

Marco Garibay, junior in Business, said JUULs are extremely popular on campus, and its users don’t care about the health effects.

The increasing use of e-cigarettes has also attracted the attention of the University administration, which has banned the use of JUULs on campus, and the National Institute on Drug Abuse, which has released reports and research about the health effects of e-cigarettes.

“I would not believe what an e-cigarette company tells you in terms of whether something is safe or not,” Drenan said. “They of course want to sell you a product, so there’s a bit of a conflict of interest there. People would be advised to wait for research to either confirm they are safe or confirm that they are something to be avoided.”